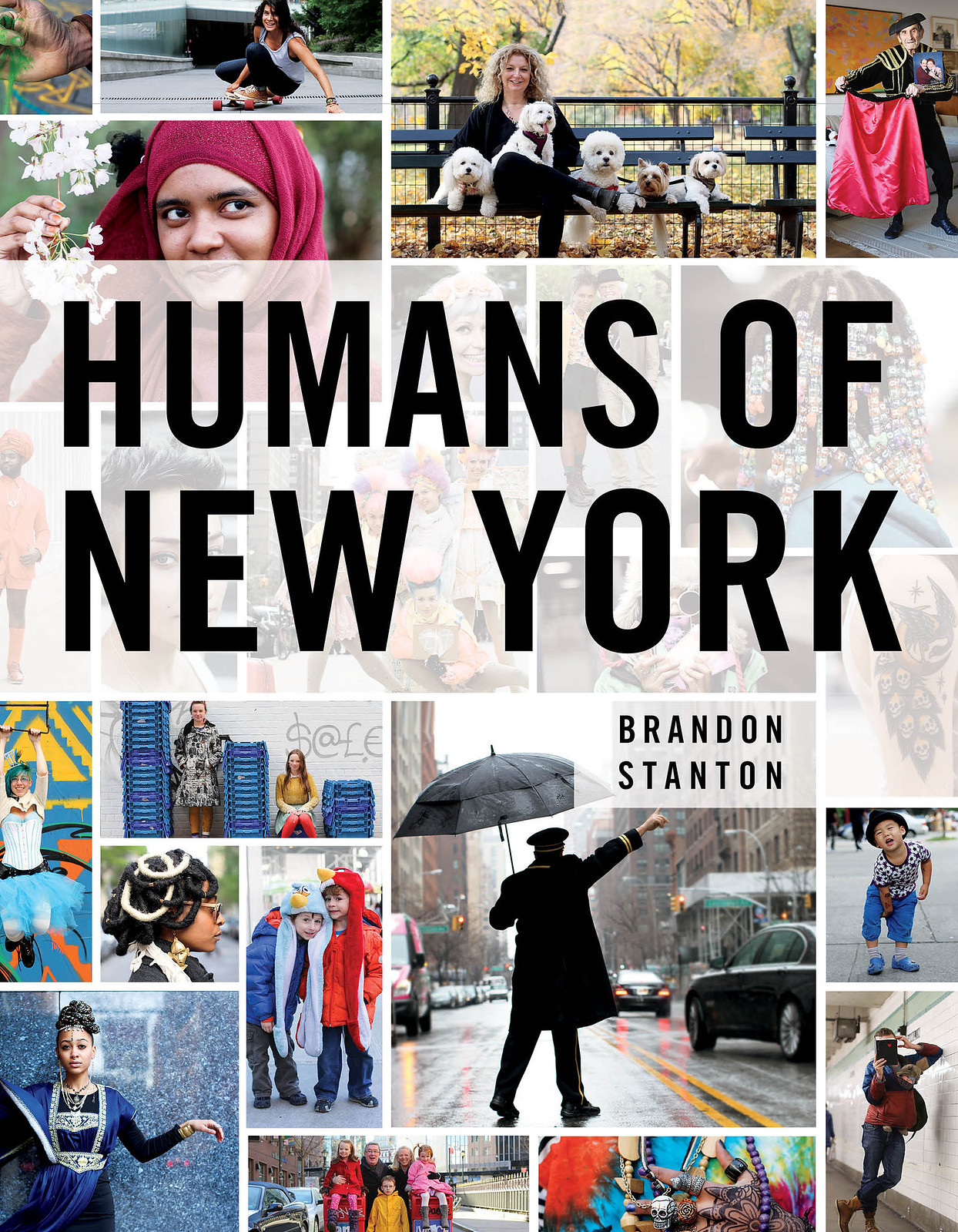 Humans of New York is a wonderful —and ongoing— collection of portraits of New Yorkers by Brandon Stanton.

New York is the greatest city in the world. I’m always in awe of its incredible energy and the uniqueness of its people. It is a place like no other to watch life unfold. Brandon’s project captures this essence better than any other I’ve ever seen. It really is a must read.

Humans of New York, the book, is a compilation of the most interesting anecdotes and pictures from the project’s first three years. It showcases the greatness of New York, but more importantly, that of its people. It is a love letter to diversity and the human spirit. Above all, though, it’s just a gorgeous, gorgeous book.

There’s a very short list of books I’d recommend buying in hardcover edition, and this is one of them. Trust me, you will not regret it.

During the development of most any product, there are always times when things aren’t quite right. Times when you feel like you may be going backwards a bit. Times where it’s almost there, but you can’t yet figure out why it isn’t. Times when you hate the thing today that you loved yesterday. Times when what you had in your head isn’t quite what you’re seeing in front of you. Yet. That’s when you need to have faith.

I try to keep this in mind every day.

I’m really sorry for how things ended at Macworld, but I’m so glad we have Six Colors now. Jason’s work is amazing and inspiring, and I couldn’t imagine the Apple community without him.

It wasn’t until I stopped thinking of my iPhone as a phone, and started thinking of it as a computing device, that I warmed to the idea of a honking-big smartphone. My hope with the iPhone 6 Plus is that I’ll find myself carrying a second device much less frequently. Sure, the 6 Plus may be bigger than the “perfect” phone size, and it may be a tight fit in my front jeans pocket, but it’s still incredibly small for a powerful computing device, and as long as it fits in my pocket at all, it’s better than carrying a smaller phone and a bag or sleeve with an iPad or laptop inside.

Really good point. I can see how this line of thinking would work for many. Me, I’m already used to carrying a bag everywhere because of my diabetes-related gear, so I don’t really find it that much more inconvenient to carry my iPad when I think I may need it.

To me, the more compelling features of the 6 Plus are the higher pixel density of the display (not really the size itself), the better camera with optical image stabilization, and the longer-lasting battery. All together they make a pretty good case for the iPhone 6 Plus than only gets better if, like Frakes, you look at it purely as a computing device instead of a phone.

Like I said before, I will reserve final judgement until I see them in person, in a store, and get to play with both of them for a few minutes at least. That being said, however, they are both extremely good devices so there’s probably no wrong choice here. If you’re getting ready to buy one, go with your gut and don’t think about it too much, you’ll be fine.

NOTE: This is an update to my article on how to build a lightweight photography kit for the urban professional. I have updated the original article to add this information, but I’m including it here separately for those of you who already read that piece.

Lately I’ve been experimenting with an old analog SLR that belonged to my father. It’s a Canon AE-1 Program, one of the most popular 35mm film SLR’s from the 80’s. It’s in absolutely mint condition and it just pained me to see it unused, so I grabbed it a couple months ago and I’ve been playing with it since then. 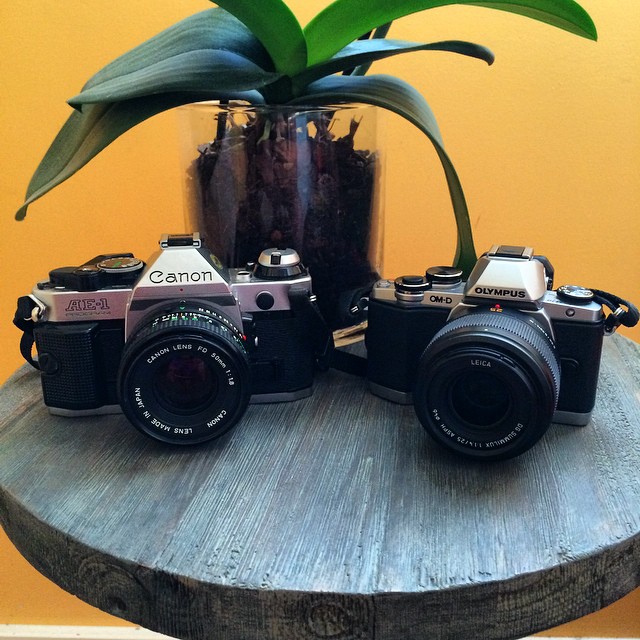 Fortunately, this camera also fits inside the RR Field Pocket without any issues, maybe even better than the E-M10. Despite being a 35mm film SLR —this sensor size is what we’d call “full-frame” in the digital world—, the body of the AE-1 Program is remarkably compact. As for the lens, I’ve been shooting with the kit lens, a Canon FDn 50mm f/1.8, which is pretty good, giving sharp images and decent bokeh. I also recently purchased a used Canon FDn 35mm f/2.0 lens on ebay, which is fantastic for street photography. It’s the fastest Canon FD lens in this focal length, but it’s even smaller —although a bit heavier— than the Panasonic Leica 25mm f1.4 for Micro Four Thirds 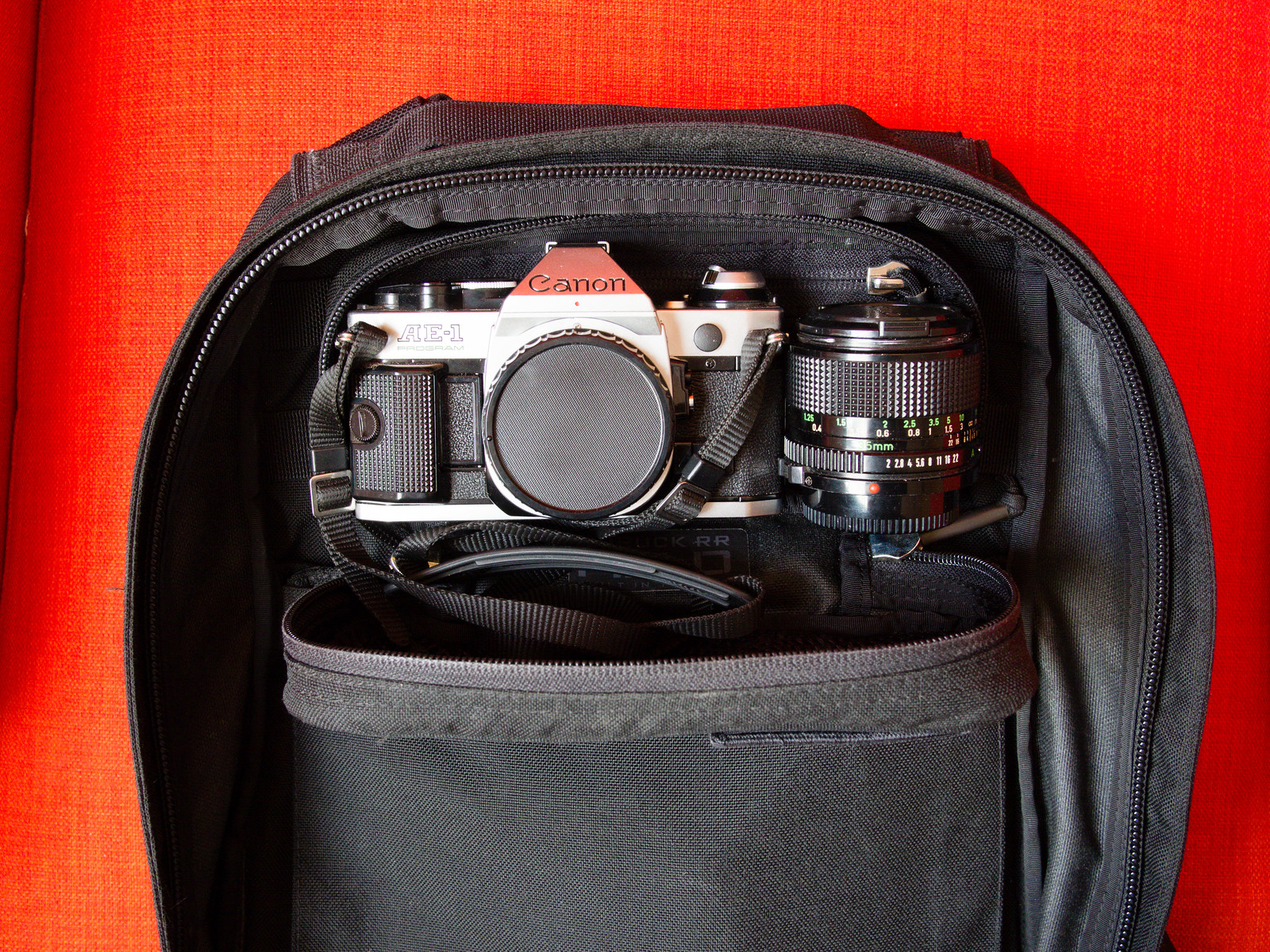 So far I’m loving the experience of shooting film, and I would recommend anyone to try it. The good news is, you can get a high-end 35mm film SLR and a pretty good lens for under $100 on ebay, easy. I think it’s a great creative exercise because it forces you to be much more thoughtful and deliberate about your photography, and that’s good. Full auto-everything doesn’t make you a better photographer; being 100% responsible for the image you capture does.

I was very curious to read Matt’s thoughts on this subject. I think his position is entirely coherent and eminently reasonable. Then again, that’s not really a surprise.

I actually believed the yes would win, mainly because of how the issue has been portrayed by the Spanish media. Many politicians from Catalonia have been holding up the Scottish referendum as a victory of the people for months, and they’ve been playing it as though Scottish independence was a sure thing, and the referendum a mere formality. They believed the result was going to be overwhelmingly in favor of the yes, and they bet heavily on the Scottish example to advance their own pro-independence cause. As it turned out, it was not to be, and no matter how they try to spin it now, the outcome of the Scottish referendum has been a direct blow to the aspirations for Catalonian independence as well. If the door was already half-shut, this may be what slams it closed for good.

Now the question is, where do they go from here?

I don’t mind admitting that I feel like we’ve missed an opportunity.

I absolutely get where he’s coming from, but I believe the opportunity still exists. Scotland has achieved an unprecedented level of autonomy from the British government, and that’s huge. If they play their cards right, they could very well get the best of both sides with this outcome. Of course, as Matt points out, there are a million problems that the UK as a nation still needs to figure out, so we’ll see how things work out in the end.

I readily admit I’m not qualified to judge, but as a European citizen, I’m happy Scotland is still part of the Union. Yes, the UK has always been pretty ambivalent towards the EU, but they’re part of it, even if they don’t always like to admit it. I like Scotland, and I like the idea of it feeling like an extension of home. Europe is one big home we’ve built together, and I for one wouldn’t trade it for anything.

Yesterday was a historic day, as Scotland voted to decide its future. In the end, they decided to stay in the UK, with the no obtaining 55.4% of all votes cast.

Whatever your views on the matter, this was a great show of democracy, and they should be proud.

Marco Arment, on the recent reports that Apple is collaborating with Bono to launch a new anti-piracy music format:

There’s nothing Apple or Bono can do to make people care enough about glorified liner notes. People care about music and convenience, period.

As for “music that can’t be pirated”, I ask again, what decade is this? That ship has not only sailed long ago, but has circled the world hundreds of times, sunk, been dragged up, turned into a tourist attraction, went out of business, and been gutted and retrofitted as a more profitable oil tanker. Piracy is not the music industry’s real problem and never has been, and we have yet to come up with any audio or video medium that truly can’t be pirated.

Excellent piece. I don’t know if the reports are reliable, though. The idea seems too misguided and out of touch with reality for Apple to actually be considering it.

Amazon has launched the Kindle Voyage, the new flagship Kindle e-reader that replaces the Kindle Paperwhite. It sports a 300 ppi display that promises to be sharper, and it also has an ambient-light sensor that automatically adjusts brightness to match the environment.

It looks like battery life is slightly inferior, though, down to 6 weeks as opposed to 8 weeks for the previous generation. However, at those numbers it doesn’t really matter, both have battery life to spare.

Also available are the previous generation Kindle Paperwhite ($119 WiFi-only, or $189 WiFi + 3G), and the regular Kindle (with no backlight) at $79.

All in all, The Kindle Voyage looks like a very interesting upgrade, and it will probably be an extremely popular gift this holiday season. If you make your purchase through one of these links, you will also be supporting my work and contributing to keeping this site running. Thanks!

Apart from the excellent, full review of iOS 8 by Federico Viticci, the team at MacStories have put together an awesome guide to help people out with the transition:

iOS 8 is, by any measure, a big update. A lot of it is refinement to last year’s drastic design overhaul, but there are also a lot of notable new features. Sitting amongst those refinements and big new features are little nuggets of delight in which Apple has designed or implemented something (whether it be a feature, design flourish or a shortcut) that you might not notice until one day you stumble upon it accidentally.

Also, don’t miss the extended coverage they’re doing of some of the most interesting iOS 8-optimized apps we’re seeing so far. Some of them include:

And there’s more. You could easily spend your whole day at MacStories today, and it would be worth it.