How was your week? Welcome to another issue of Morning Coffee.

In what seems like a first, there’s not a single Apple-related piece on this week’s roundup. I’m actually proud that it only took 24 issues.

Issue #24: Rdio’s death, how not to die on a bike in London, and the space doctor’s big idea

Fear not: despite the lack of any fruit-flavored pieces, there’s plenty of interesting writing here to keep you entertained all weekend. I don’t know what the weather’s like where you live, but here in Madrid it’s cold and cloudy — in other words, perfect for brewing a hot cup of delicious coffee and getting some quality reading done.

They never even tried for value | Ben Brooks →

This piece on the troubled relationship between publishers, advertisers, and readers is a perfect example:

Advertisers want sites which draw the smartest, most wealthy readers possible. Sites want to to draw whatever advertisers want, but with little risk and little expense to them. Readers, especially the smart and wealthy ones, want the best content they can find — wherever they might find that content.

Earlier in the week, music streaming service Rdio filed for bankruptcy. The service as we know it will soon cease to exist, and the company will sell its parts to Pandora. This is the unfortunate end of Rdio’s struggle to compete against Spotify, but there are a few valuable lessons in here.

This piece by Casey Newton is an excellent post-mortem analysis on what exactly went wrong and, perhaps more importantly, why:

Rdio realized this only belatedly. “Rdio, I guess, made the mistake of trying to be sustainable too early,” Miner says. “That classic startup mistake of worrying about being profitable and having a business that makes any sense before you’ve reached this astronomical growth curve. Which is partly the trap of the business model itself — because of the content licensing deals, the margins for the business were so incredibly thin. No matter what we did, the labels made the lion’s share of the revenue. You have to make it up with extreme volume, which is why you see Spotify going after every human being in the world.”

And yet even with more than 75 million users and 20 million paid users, Spotify still isn’t profitable. It remains to be seen whether Apple or Google can turn their own streaming offerings into viable businesses — or whether they will simply use music as a loss leader to draw consumers further into their respective ecosystems, making the money back on hardware sales or other services.

If Spotify isn’t profitable with its massive popularity, who the hell can be? I’m no industry expert, but this very much sounds like a broken system to me.

Hilarious take on password recovery over at The New Yorker.

How not to die on a bike in London | Haley Campbell →

12. Nurses treat you better if you were wearing a helmet when it all went wrong. Even if the helmet actively made your injuries worse, the nurse is slightly less likely to badmouth you to the doctor inspecting your face/remains of your mouth. Wear a helmet but know it’s for nurses, not your own head.

14. Related: There is a man in London with “FUCK” tattooed down one calf and “TAXIS” down the other. He wears shorts all winter and even Criswell can predict how he is going to die.

My white neighbor thought I was breaking into my own apartment. Nineteen cops showed up. | Fay Wells →

Terrifying story by Fay Wells over at The Washington Post:

I said it was only me and, hands still raised, slowly descended the stairs, focused on one officer’s eyes and on his pistol. I had never looked down the barrel of a gun or at the face of a man with a loaded weapon pointed at me. In his eyes, I saw fear and anger. I had no idea what was happening, but I saw how it would end: I would be dead in the stairwell outside my apartment, because something about me — a 5-foot-7, 125-pound black woman — frightened this man with a gun. I sat down, trying to look even less threatening, trying to de-escalate. I again asked what was going on. I confirmed there were no pets or people inside.

I told the officers I didn’t want them in my apartment. I said they had no right to be there. They entered anyway. One pulled me, hands behind my back, out to the street. The neighbors were watching. Only then did I notice the ocean of officers. I counted 16. They still hadn’t told me why they’d come.

Impregnated by a speeding bullet, and other tall tales | Rose Eveleth →

Rose Eveleth writes about one of the most unbelievable stories I’ve ever heard of over at The Atlantic. She makes an excellent point on the dangers of confounding science with myth:

If this sounds extremely unlikely, that’s because it is. In fact, it never happened. The article in The American Medical Weekly was satire, a joke meant to poke fun at the aggrandized Civil War stories the doctor kept hearing. Two weeks later the journal ran an editor’s note clarifying that the piece had been a gag. But somehow, along the chain, the fact that it was a joke got lost. And the story of the impregnating bullet persisted as medical fact as late as 1959.

This is easily my favorite piece of the week. Randall Munroe, of xkcd fame, explains Einstein’s General Theory of Relativity using only the 1,000 most common words in the English language over at The New Yorker:

Earlier in the week, I published my first impressions on the 2.0 firmware version for the Sony a7 II. I specifically compared the newly available uncompressed RAW files with the previous compressed ones, and found there wasn’t much of a difference in image quality between them.

Jordan Steele also wrote about the 2.0 firmware update, but he decided to focus on the other main feature of the new firmware, and arguably the more important one. He tested several Canon EF lenses with two different adapters on the a7 II, and found that autofocus performance is indeed vastly improved thanks to the use of phase-detection autofocus, something that was previously unavailable for 3rd-party lenses.

It appears Jordan’s findings are right in line with what I expected:

I’ll be updating this post over the next few days as I get more experience with using these lenses to see if my initial impressions change. However, even after this short display, I feel that the Firmware 2.0 truly makes many Canon lenses viable for everyday use on the Sony A7 II. You’re not going to get native speed and compatibility, but provided the lens works well with the adapter, you won’t be too far off in most cases. It’s a dramatic change for the better in using Canon lenses, and it opens up some options for the focal lengths that are lacking in the Sony FE lineup, or are too expensive to bother with.

Neat review of a very interesting bag over at The Phoblographer. Chris Gampat liked the Everyday Messenger so much he even gave it an Editor’s Choice award, but there’s a caveat:

My biggest gripe about the bag has to do with the shoulder strap. It’s a bag clearly designed to be slung over the left shoulder. Because of the design being mostly padding, wearing it on your right shoulder requires you to reverse the entire strap. Reversing the strap is a painful ordeal that doesn’t make future adjustment of it on your body the simplest to do. In order to reverse the strap, you need to take the entire thing out and unthread it from the loops. Then you need to thread it back in the reverse way. Considering how thick the padding is and how you’ll need to thread the strap back in a way that makes adjustment simpler, it’s frankly the biggest pain in the ass about this bag.

I always wear my messenger bags on my right shoulder, so I’m a bit concerned about this. Luckily, it is possible to reverse the strap, even if it’s cumbersome, but this still sounds like a pretty big design flaw if you ask me.

I do hope your week went well, in spite of everything that’s happening all over the world. If it’s alright with you, for once, I’d rather not comment anymore on what’s going on. Others have already said plenty, so I’d like to briefly focus on something more pleasant instead.

This past Wednesday was the 30th anniversary of my favorite comic strip: Calvin and Hobbes. Of course, I posted a brief link about it on that same day, but I’d like to share a bit more about exactly what it is that I love about this strip.

I was two years old when the first Calvin and Hobbes strip was published, but it took a bit longer for me to actually meet them for the first time. I don’t remember exactly when it was, but I must have been between 6 and 8 years old, roughly the same age Calvin is in the comics.

What I do remember is how I instantly fell in love with the strip, and how eagerly I devoured as many issues as I could possibly get my hands on. I used to do that a lot as a kid. Even now, as an adult, I still do.

Of course, back then, much of the strip’s subtlety was lost on me. I wasn’t aware of many of the clearly adult themes and life lessons that were masterfully embedded in this seemingly childish strip, and it was only when I revisited it as an adult that I became aware of how exquisitely complex and layered the strip really is. Naturally, I fell in love with it all over again, for very different reasons.

That’s the magic of Calvin and Hobbes: there’s something in it for everyone. Read it, and it will change you. No other work of fiction I’ve ever read or watched has ever affected me this deeply.

I say revisited, but the truth is I never really stopped reading Calvin and Hobbes. It’s always been a constant presence in my life, and I have no doubt it has shaped many aspects of my personality, as well as my values. I certainly have much to thank Calvin and Hobbes for.

Coincidentally, I share a birthday with the strip author’s, the great Bill Watterson. One of my favorite things about Calvin and Hobbes is how true to its original concept it has stayed all through the years, despite clearly being a huge critical and commercial hit.

Watterson could have milked his creation as much as he’d wanted to — and who’d have blamed him — but he deliberately chose not to. He left a ton of money on the table in order to protect his original vision, and to ensure his legacy is preserved.

That takes courage — or insanity, I suppose. It also takes conviction, and no small amount of integrity. For that alone, Bill Watterson will always be one of my heroes.

It’s time to wrap up this issue. I’m still hard at work on my review of the Sony a7 II, which should be ready for publication soon. The rest of my weekend will be spent writing and processing photos, but given the chilly weather, I’m actually looking forward to it. I have lots of things to say about this very interesting camera, so stay tuned for more if you’re interested.

Thank you for reading, and have a great weekend. 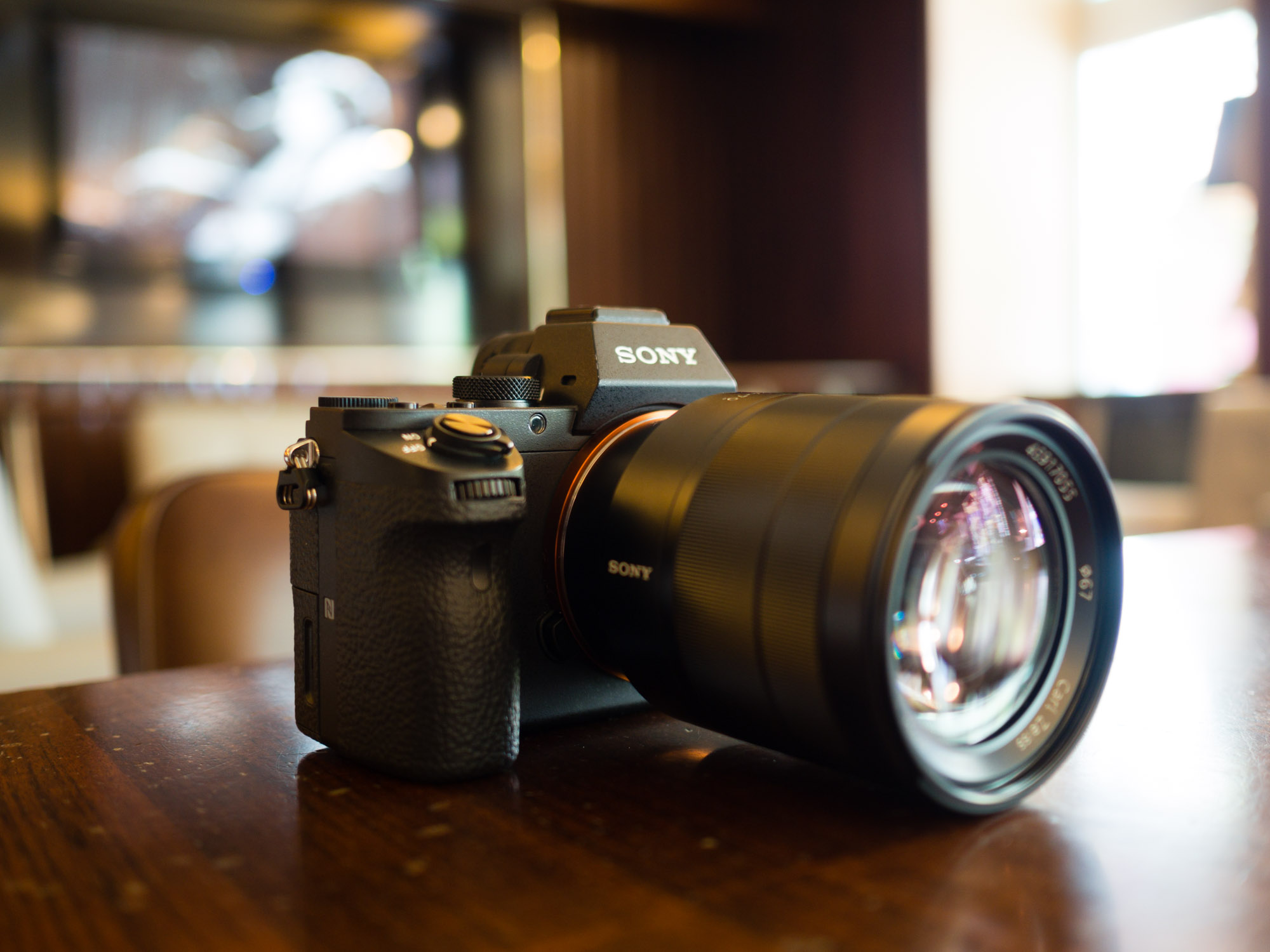