This past weekend I went to my hometown, Plasencia, to visit my family. It was the perfect opportunity to take my new Sony A7 II and the Zeiss 24-70mm f/4 lens for a walk around the old town. Having never owned a proper wide angle lens before, this was also a first for me.

Plasencia is a small but beautiful city in Western Spain. Founded in 1186 by King Alfonso VIII of Castile, the city presents a very special mixture of Christian, Muslim and Jewish cultures. In my walk I mainly visited the Jewish borough, which is known today as Barrio de los Caballeros and includes many of the most beautiful architectural highlights of the city, with the exception of the impressive Roman aqueduct.

Let me show you around for a while. 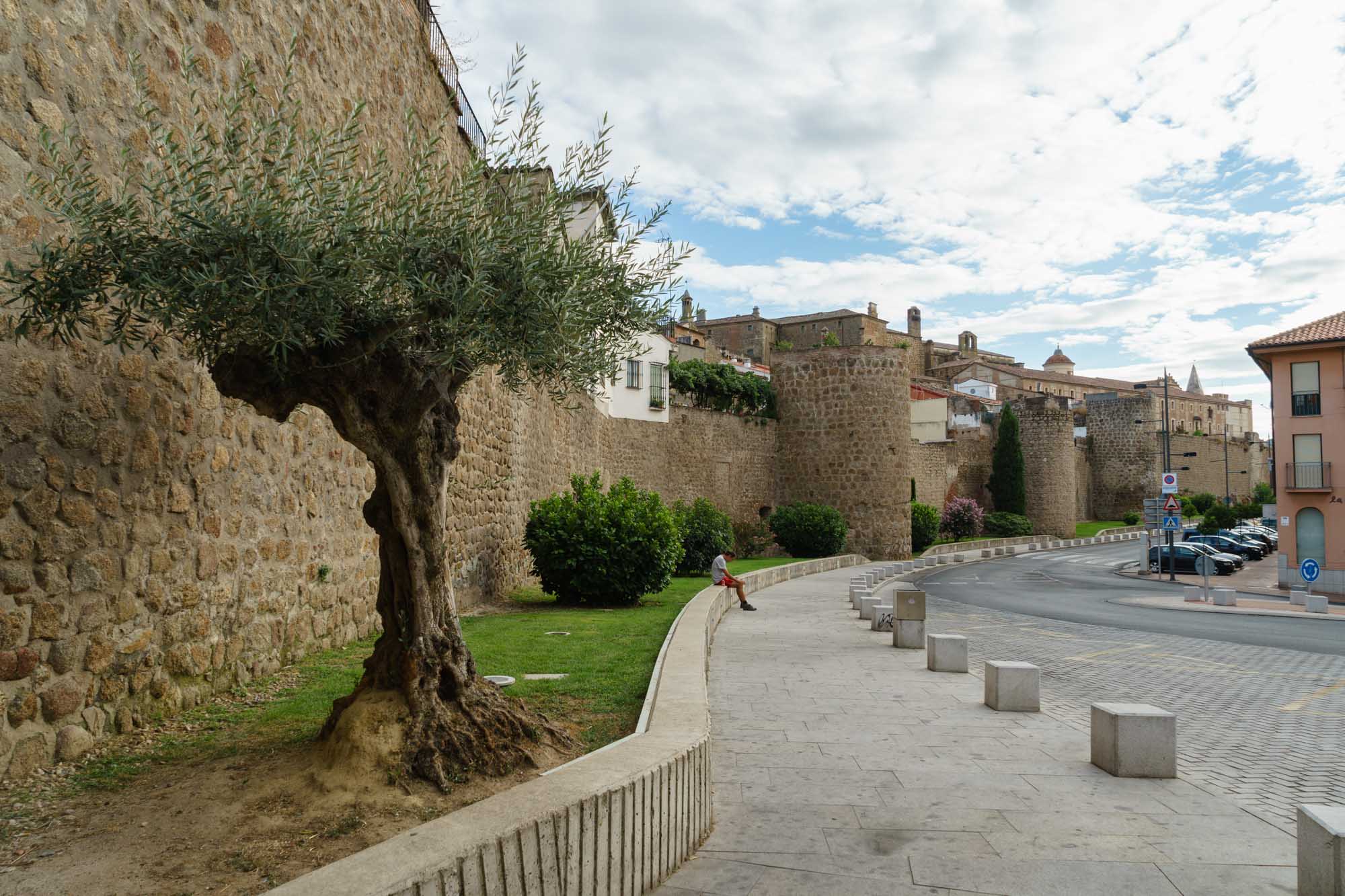 Plasencia is a walled city, with most of the wall still preserved in great condition today. 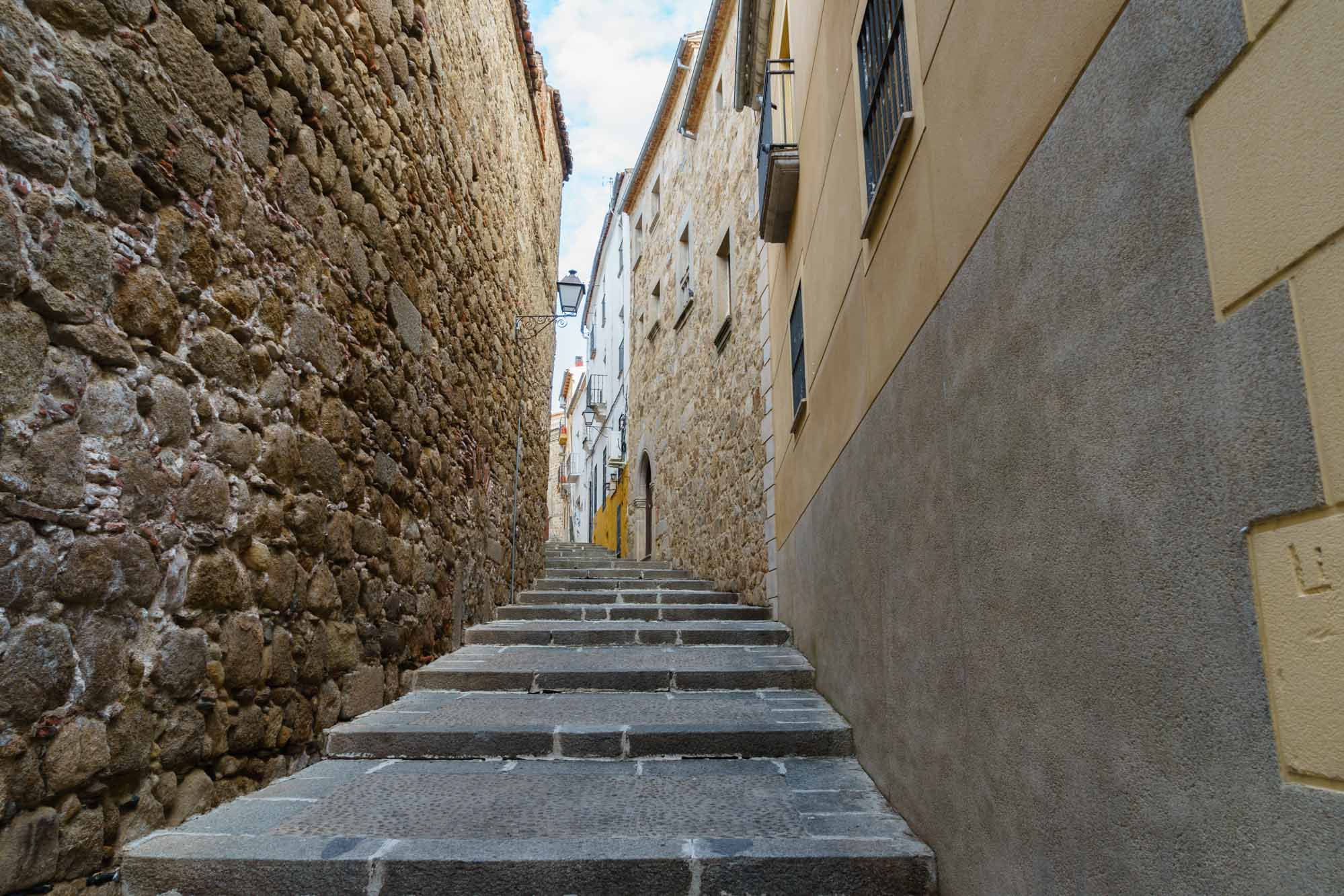 Narrow, stone-walled streets are a typical sight in the old town. 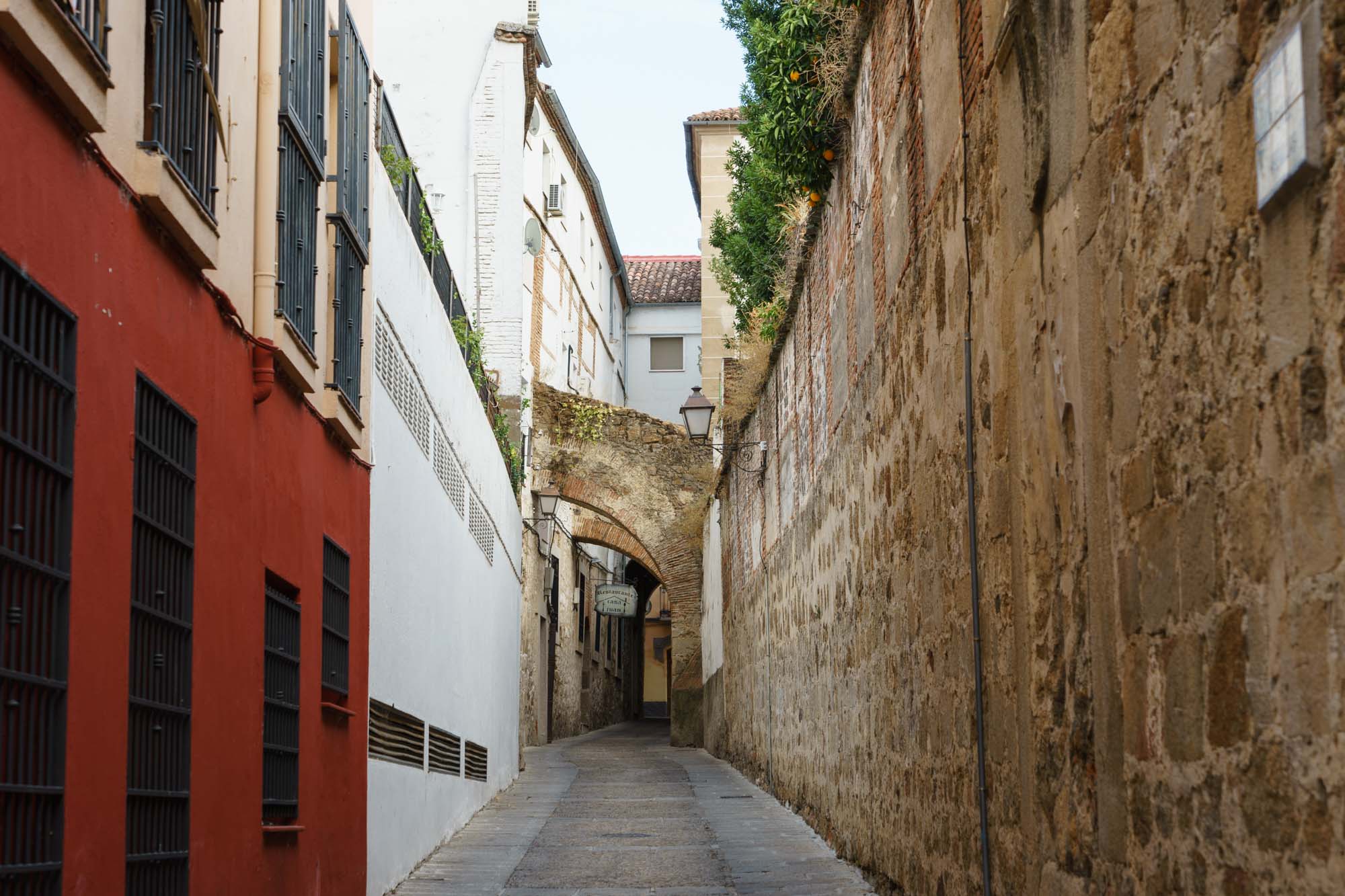 In some places, you can see where new buildings swallowed up the old stone walls of the city. 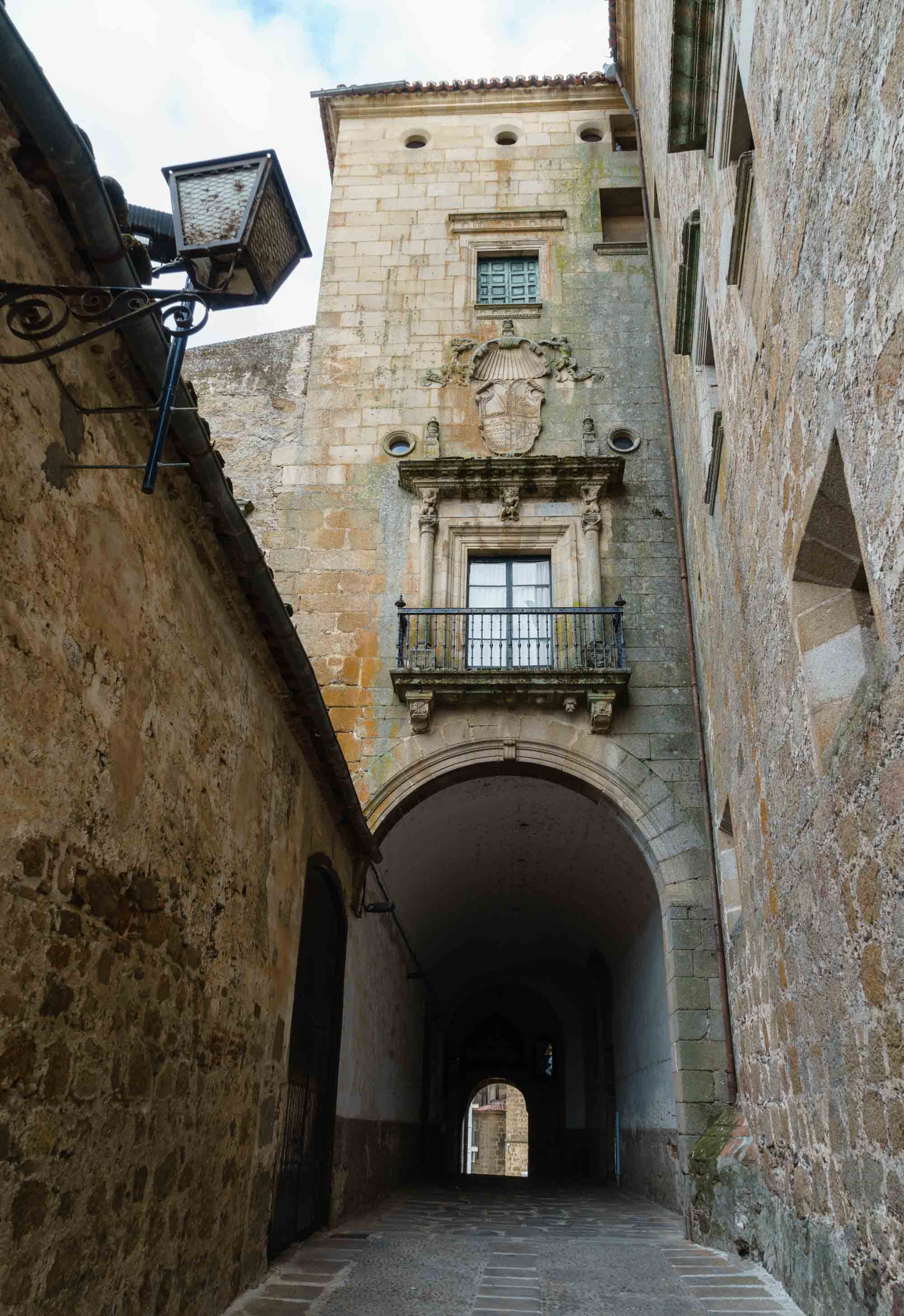 This Palace was built by former Dukes of Plasencia, Don Álvaro de Zúñiga and Doña Isabel Pimentel, in the 15th century.

The picture above is a great example of what a 24mm wide angle lens can do. I was standing really close to the building and still managed to completely fit it in the frame. I definitely need to get used to this focal length and learn to work with the distortion, but so far, I’m really liking the new creative choices it puts at my disposal. 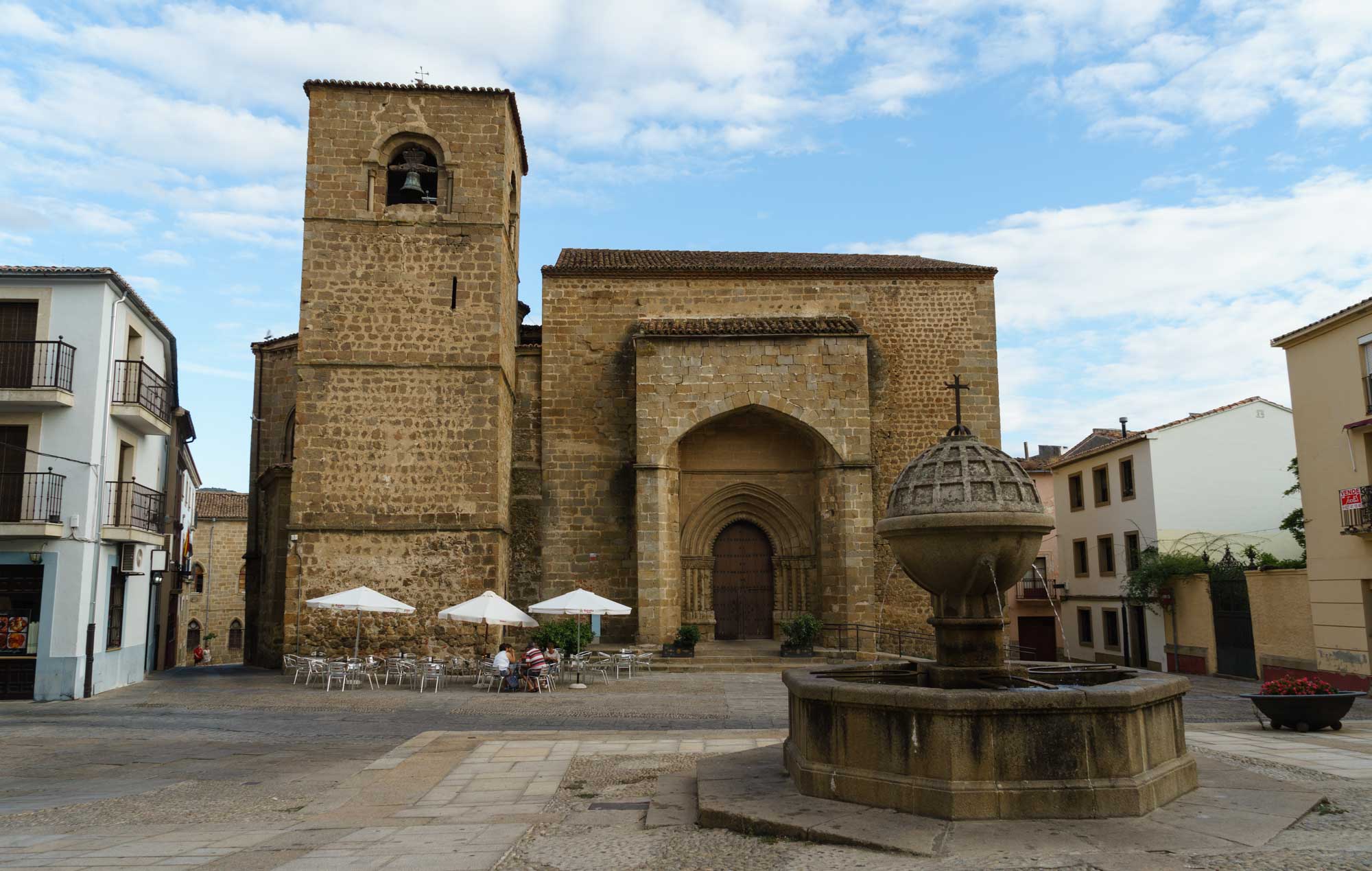 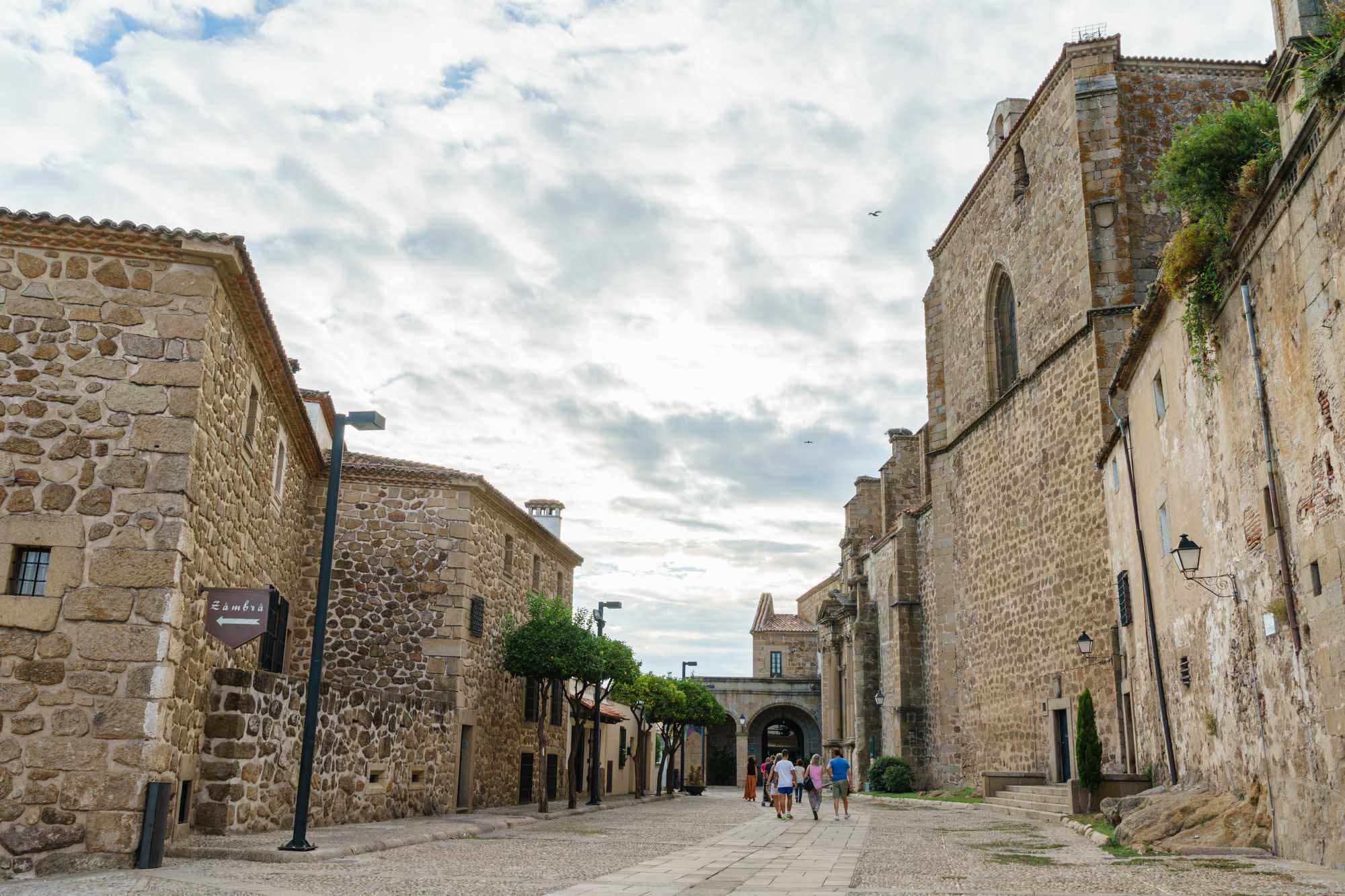 Church of Santo Domingo (St. Dominic), founded by the Zúñigas in the 15th century.

This picture of St. Dominic’s required massive shadow and highlight recovery, and the end result is still pretty decent. It seems the sensor in the A7 II really has some nice dynamic range to work with. 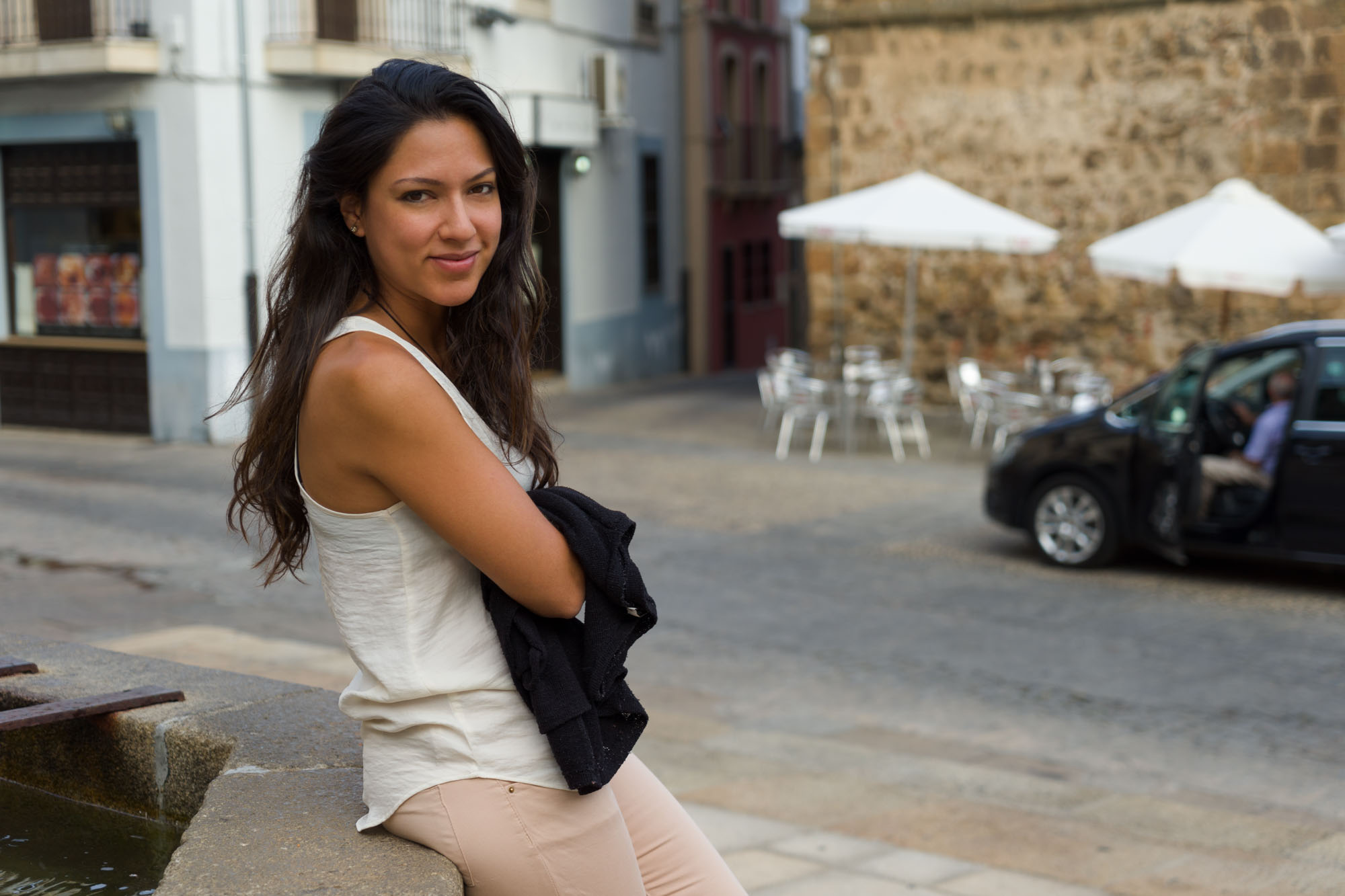 Miriam in front of San Nicolás.

This picture of Miriam was taken at 61mm and f/4. I wasn’t even fully zoomed in to 70mm and the Zeiss 24-70mm zoom still managed to achieve some degree of subject separation. Granted, at f/4 this is clearly not a fast prime, but in a pinch, it works. 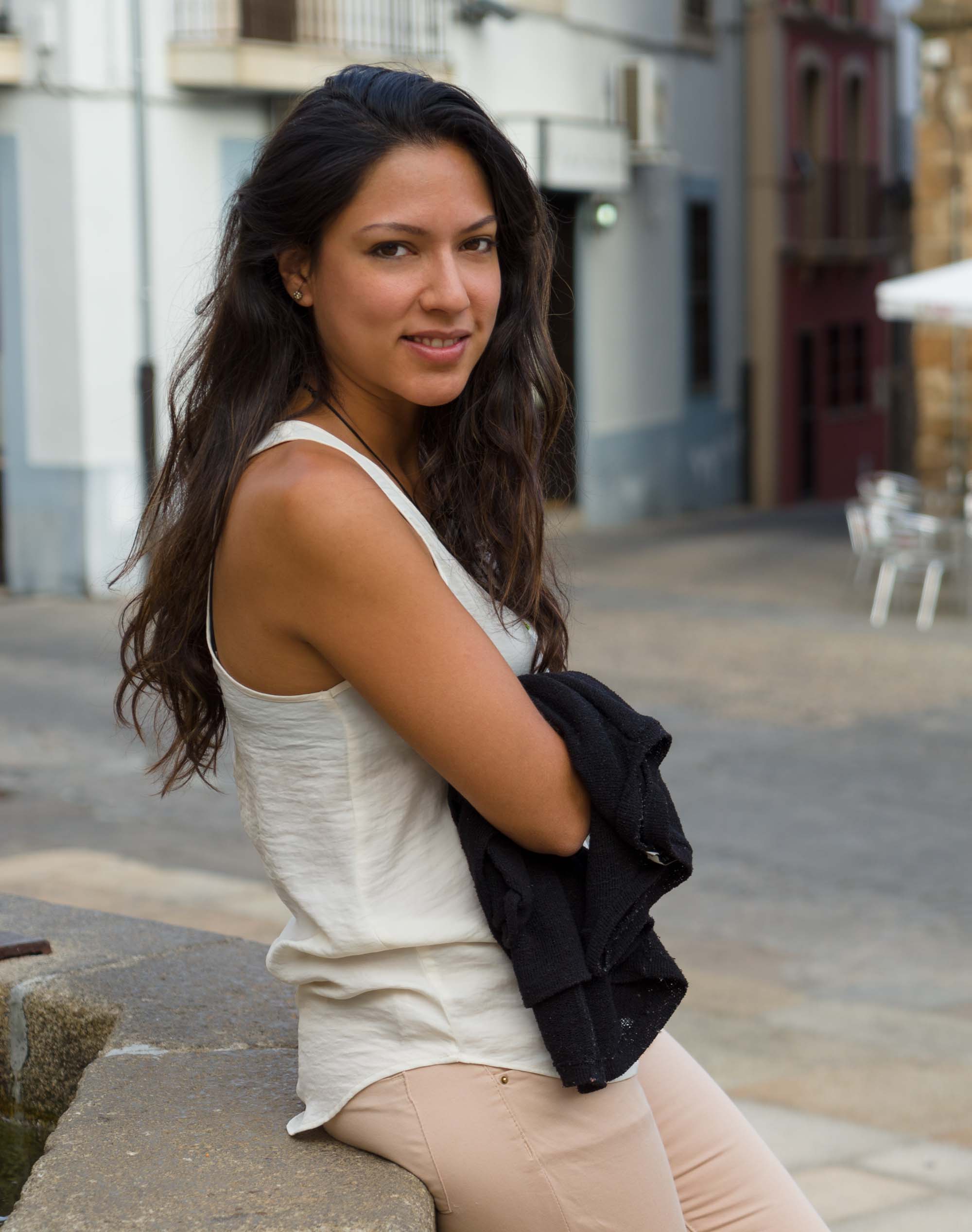 The great thing about having more pixels is that you can crop a bit more and still get plenty of detail in the final shot. Here, for example, I just cropped the sides and magically turned a landscape picture into portrait orientation (I know, I know). 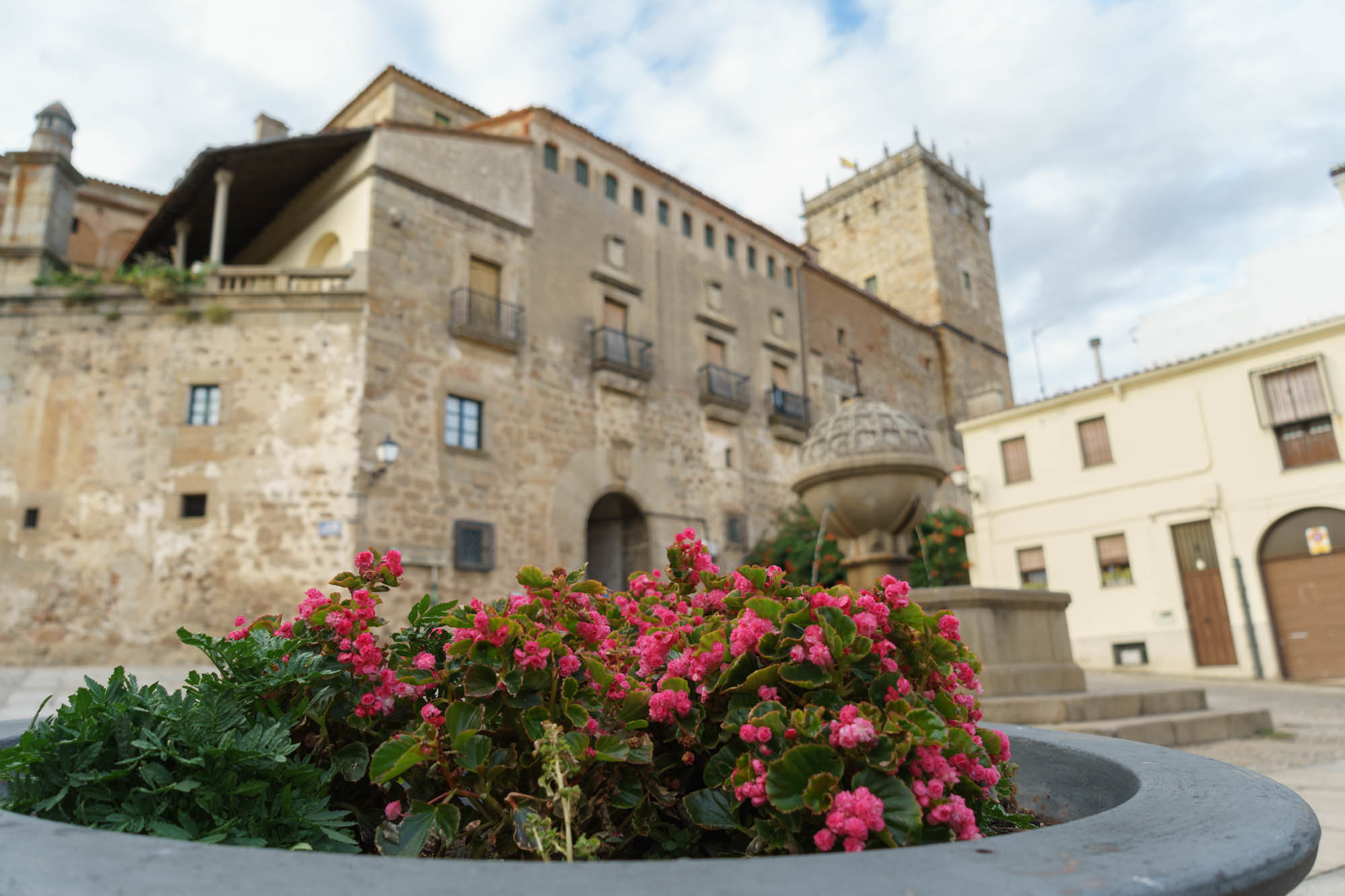 At 24mm and f/4, the possibilities for subject separation are slim to non-existent. Here I was standing close to the lens’s minimum focus distance and still didn’t manage to throw the background out of focus a great deal. Clearly I have to learn to work with the constraints of this lens, not against them. 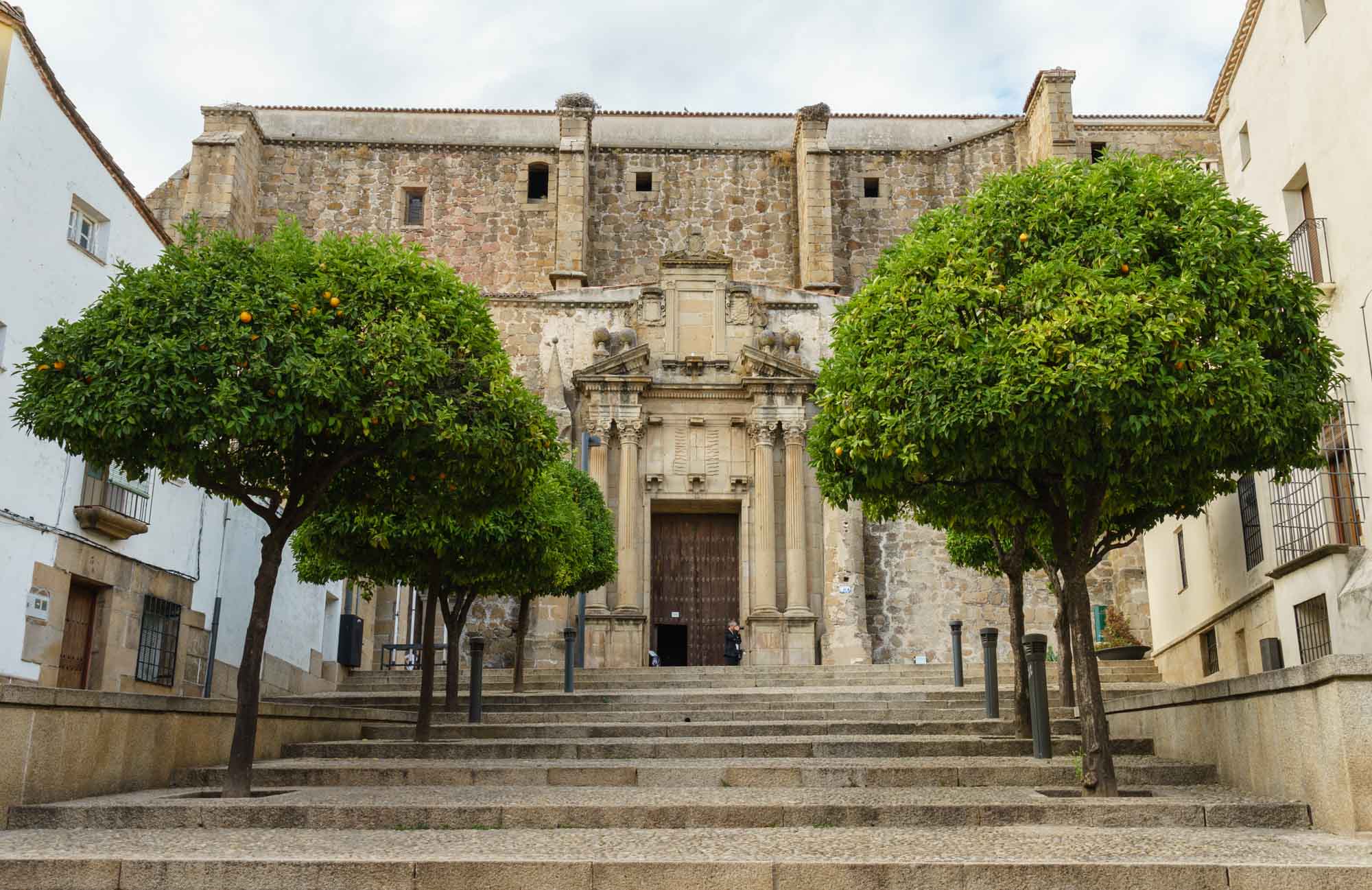 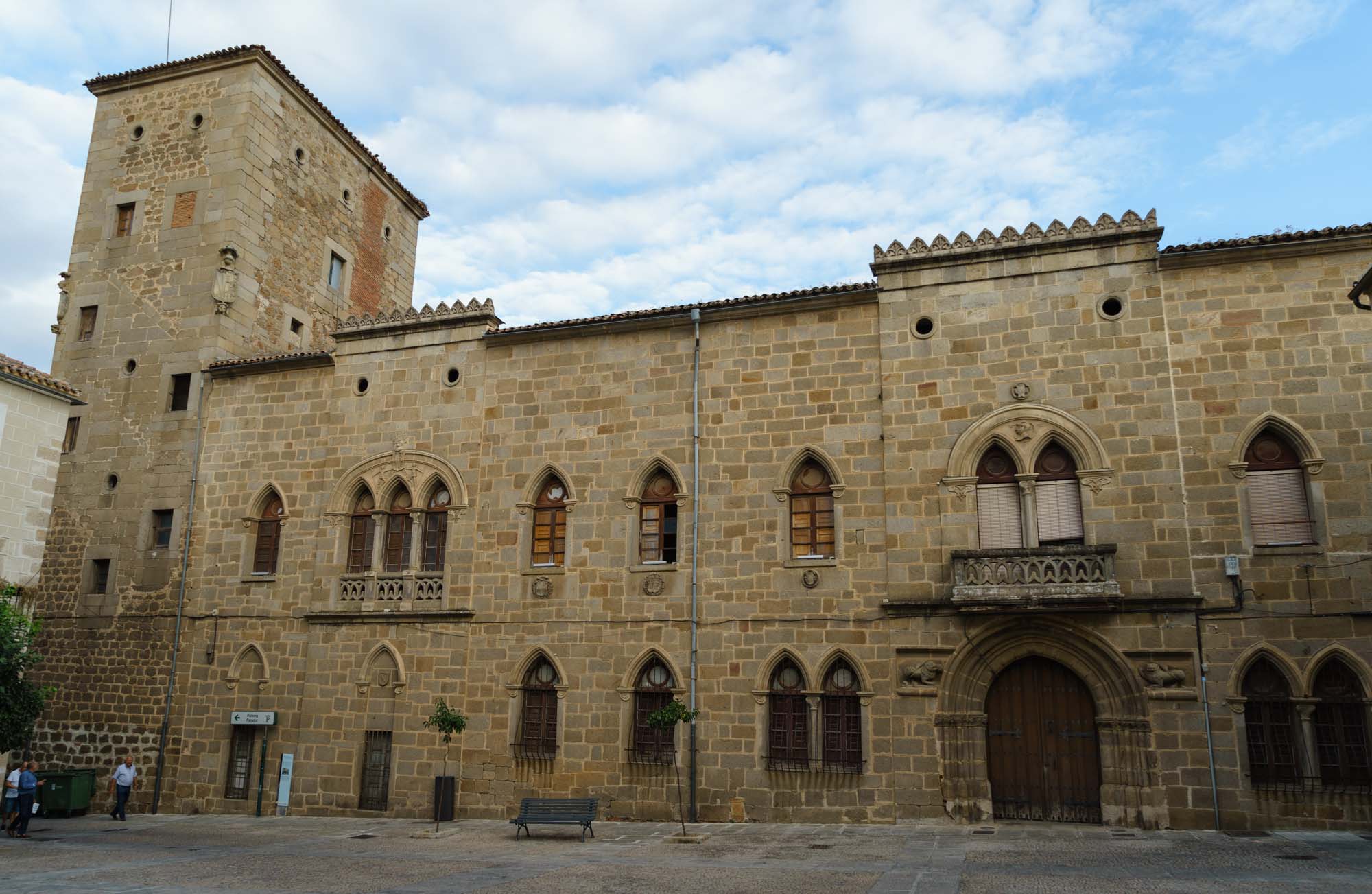 This building is officially named Palacio Monroy, but is commonly known as the House of the Two Towers. Back when it was initially built, the building featured a second tower at the right side, which was demolished in 1913. It is the oldest mansion in the city. 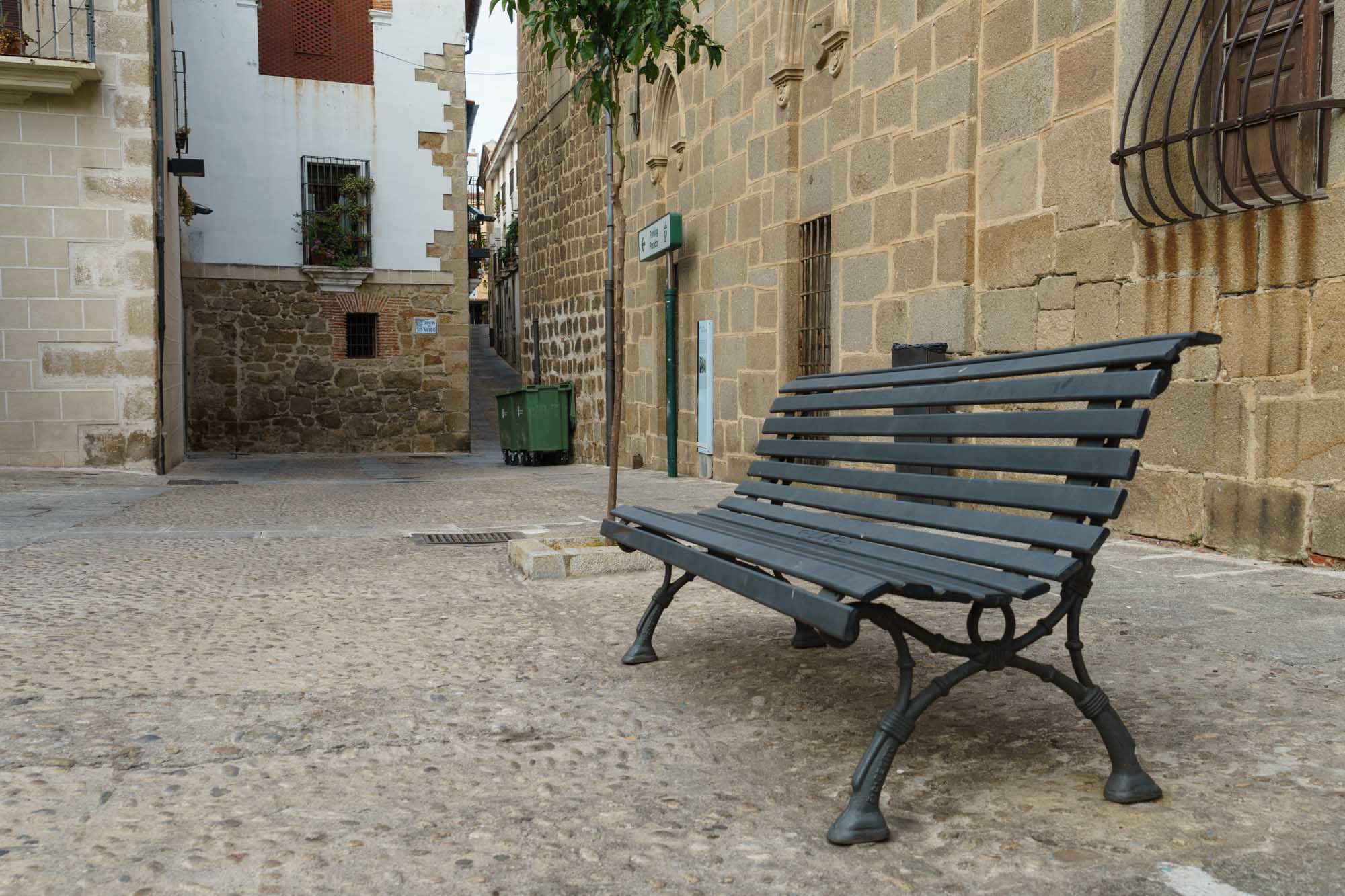 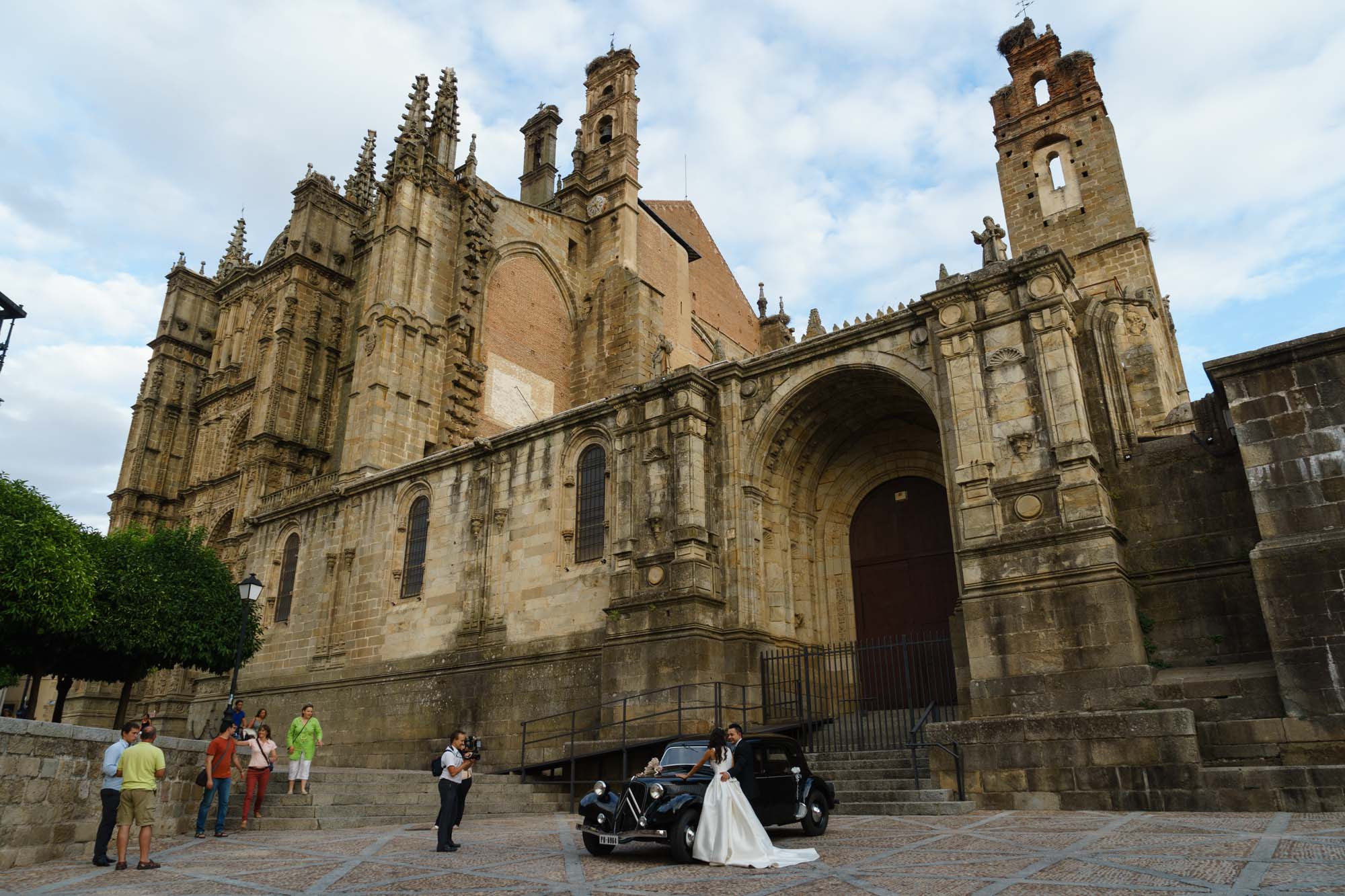 New Cathedral, 16th century. I ran into a wedding photo-shoot near the New Cathedral, which was fun to see — I actually knew the groom from high school!

Plasencia is perhaps unique in that there are two cathedrals in the city. The Old Cathedral, known as St. Mary’s, was started in the 13th century and finished in the 15th century, and represents a great example of the transition between Romanesque and Gothic architectural styles.

The New Cathedral was started in 1498 and work progressed until 1578, when construction was halted. Work on it began again during the 18th century, but it was never fully finished. This is obvious in the central area of the above picture, where the brick wall that was used to close the unfinished structure is clearly visible. 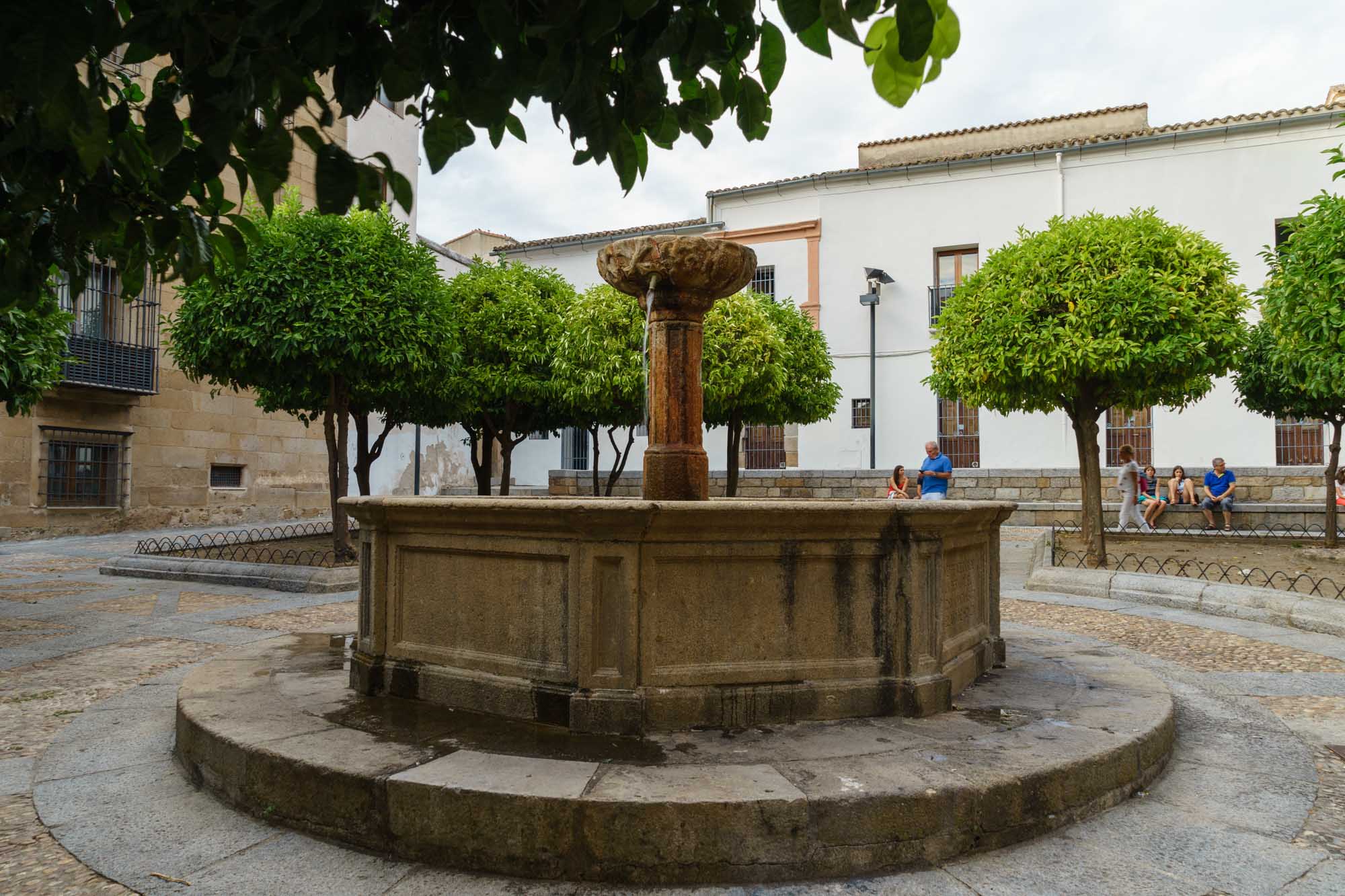 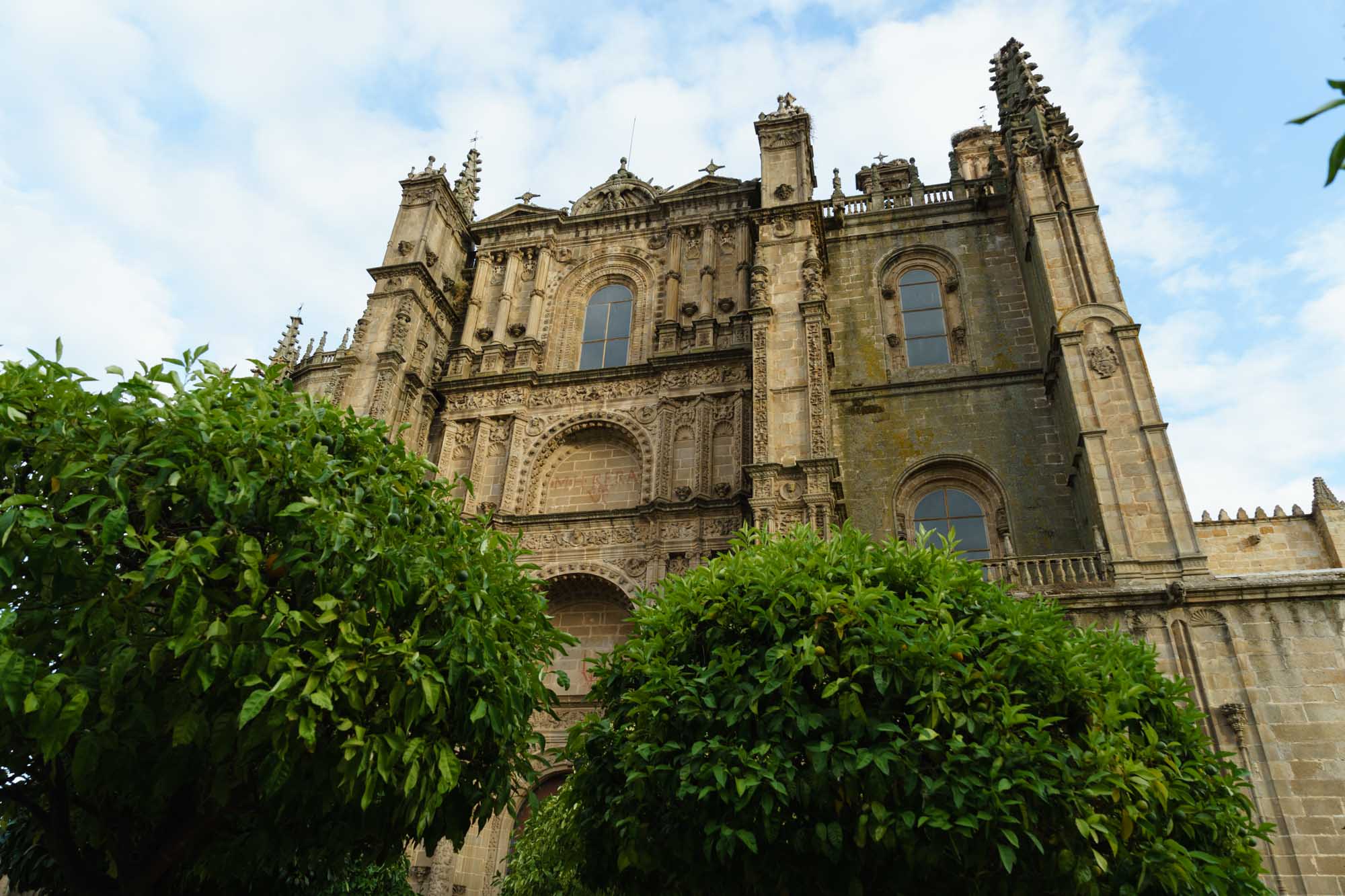 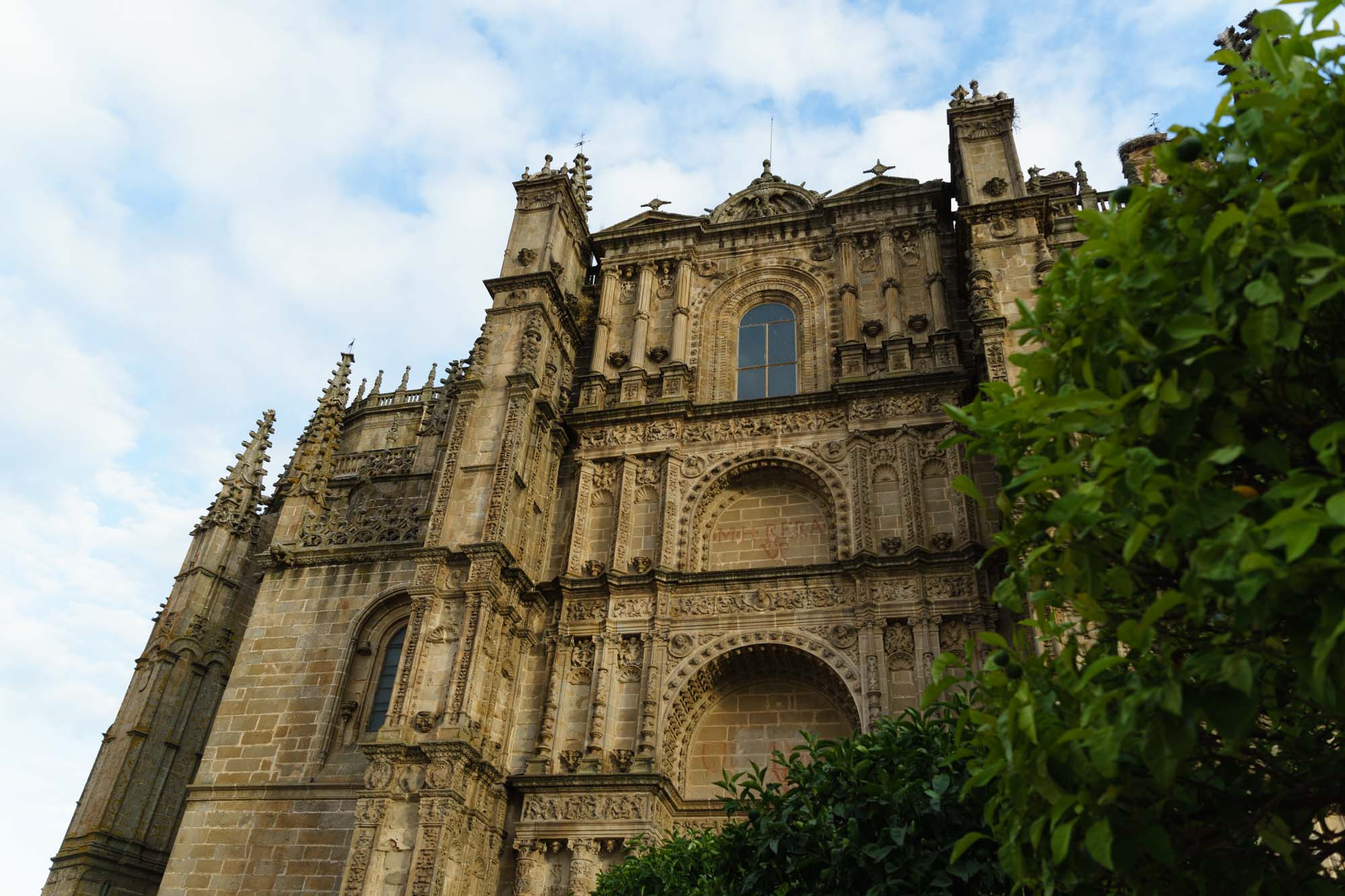 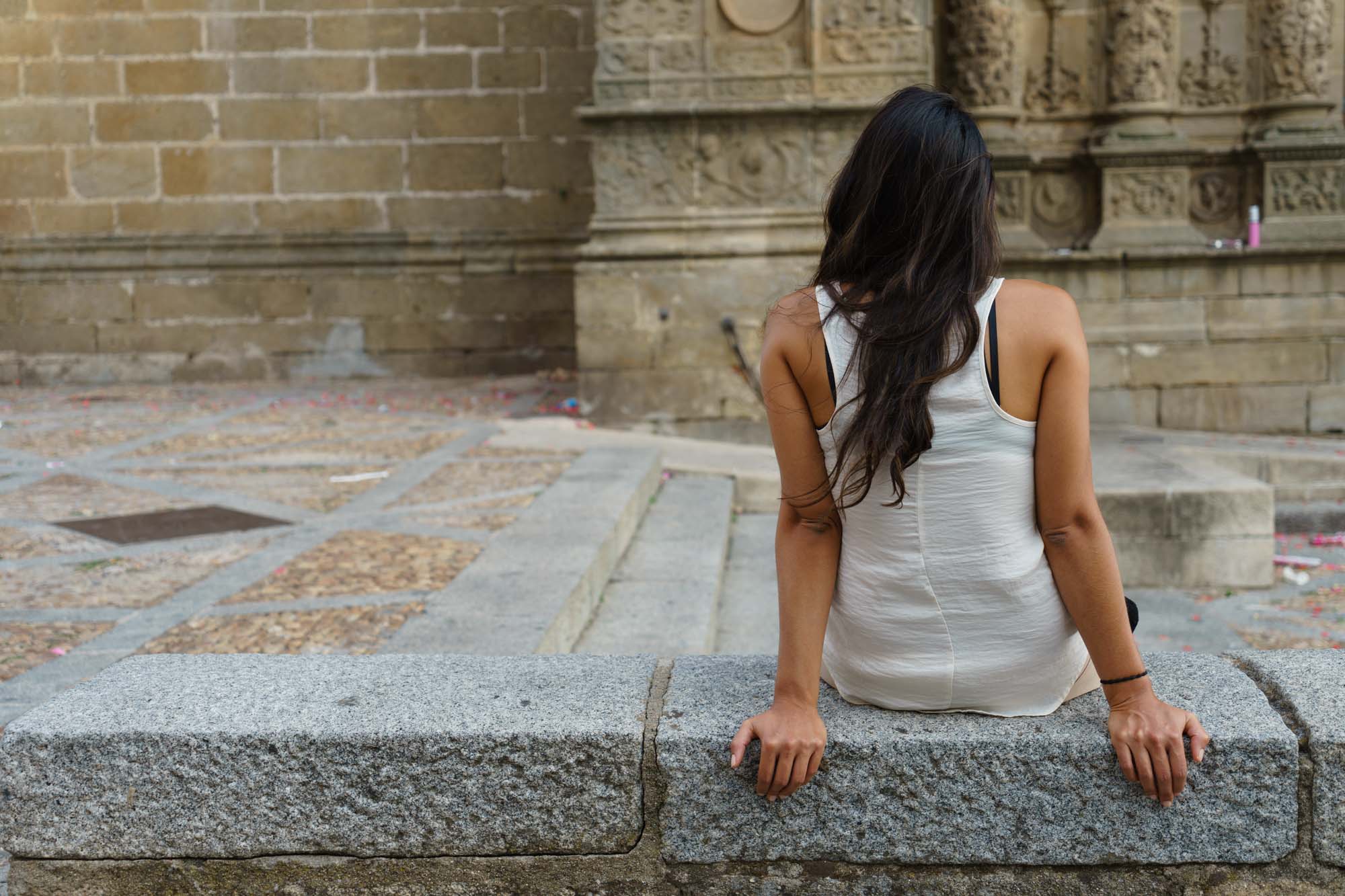 Plasencia’s food market is located right in the old town, surrounded by medieval churches and close to the city’s Plaza Mayor (main square). This makes for an interesting contrast, and it’s an example of something that makes Plasencia’s old town special: it is still mostly inhabited by long-time residents of the city, not exclusively devoted to tourism. 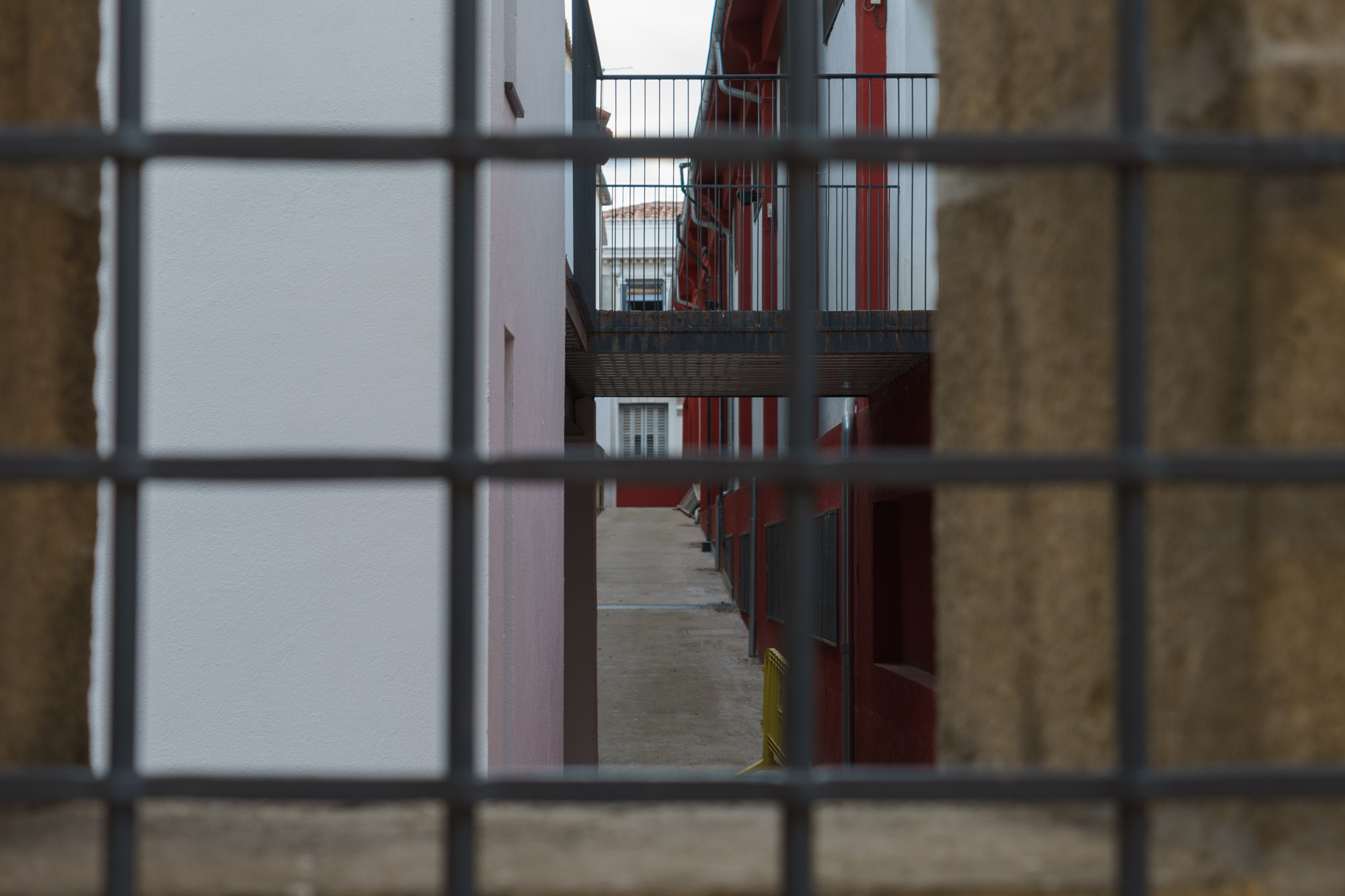 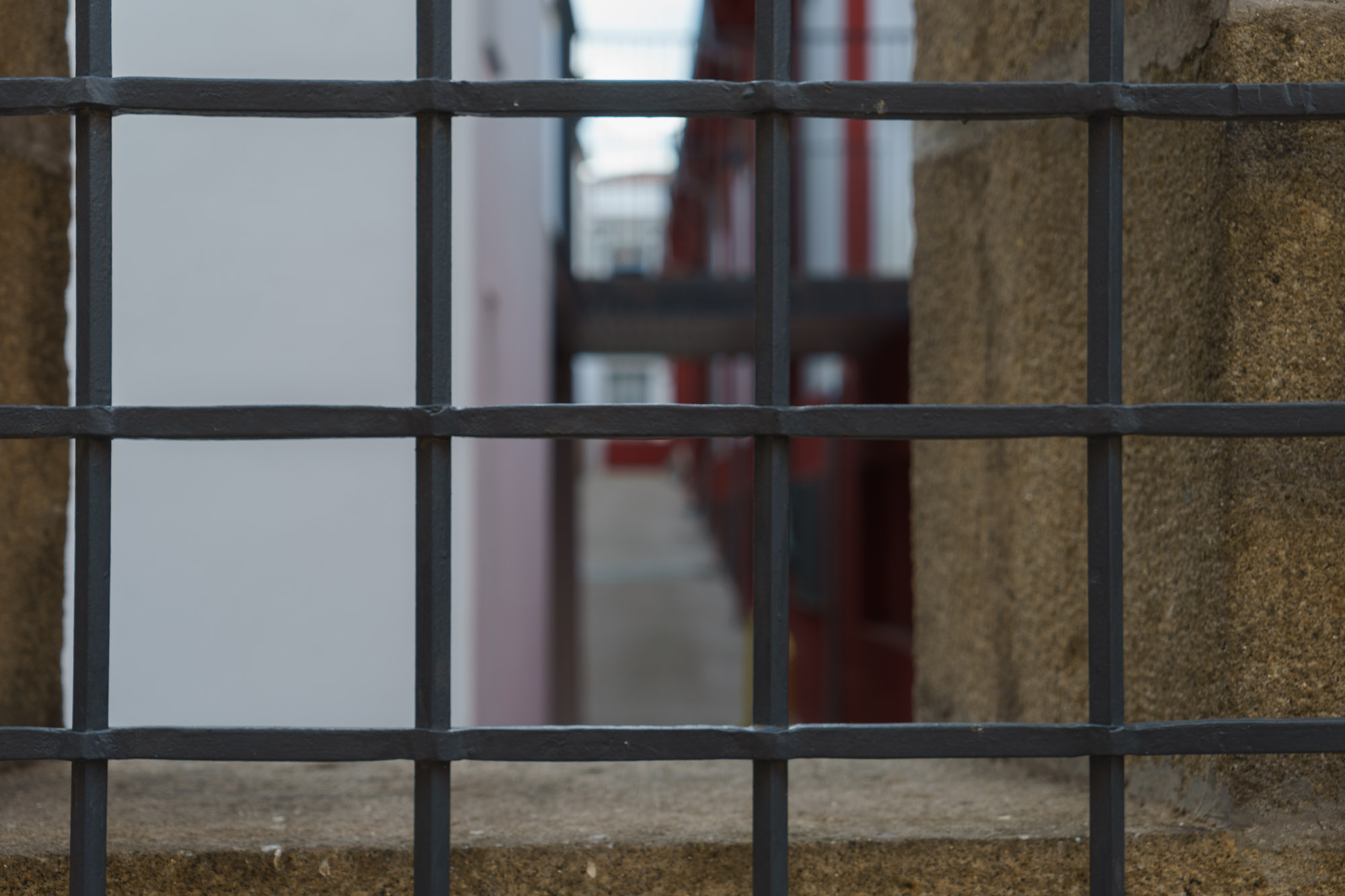 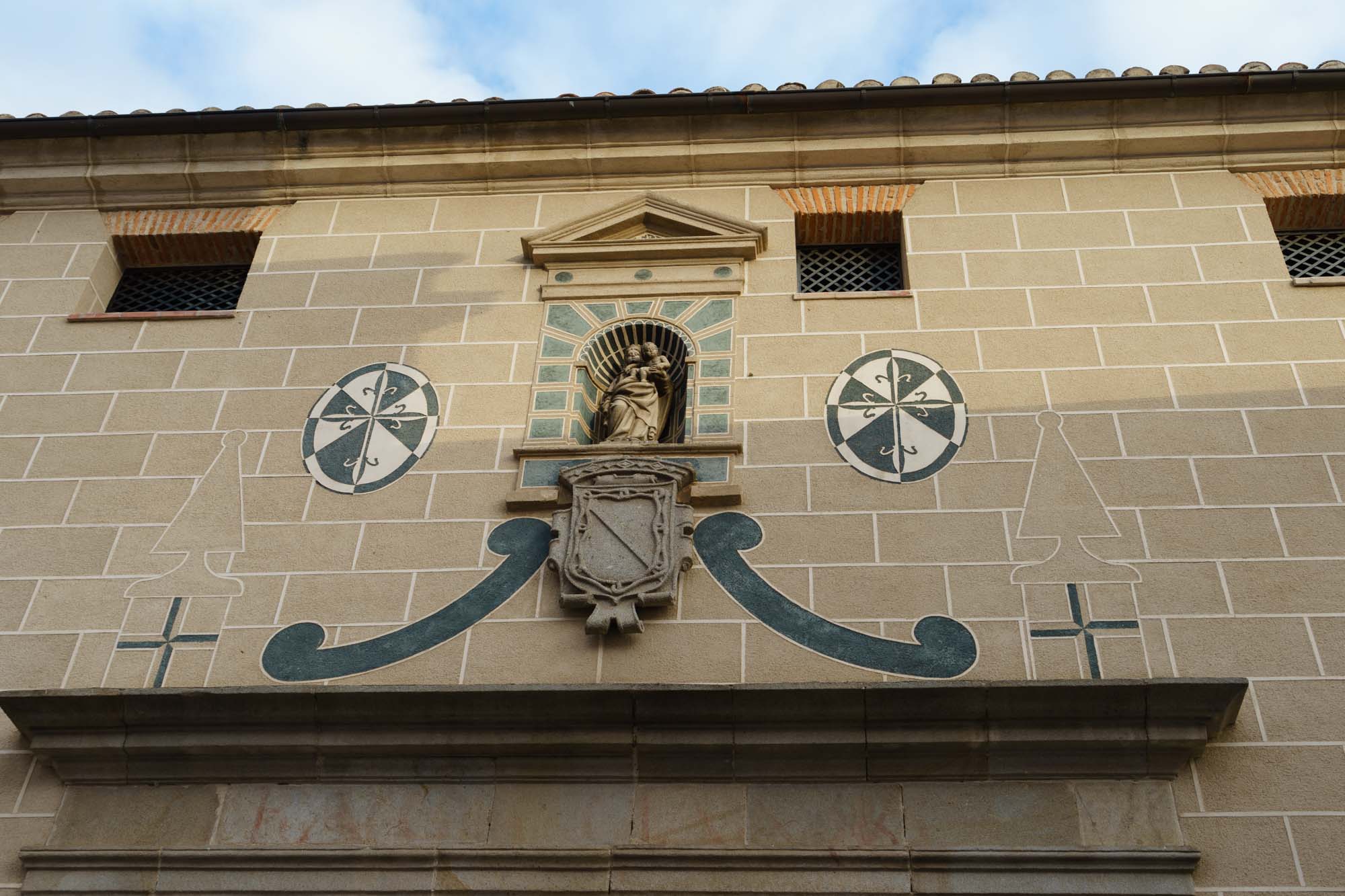 Plasencia has always been a deeply religious city, with more churches per citizen than many other cities in Spain — and the world, for that matter. Even more, beyond regular churches, there are still several enclosed religious orders active in the city. This is a picture of St. Dominic’s convent. Those small barred windows at the top represent the only contact St. Dominic’s nuns have with the outside world. 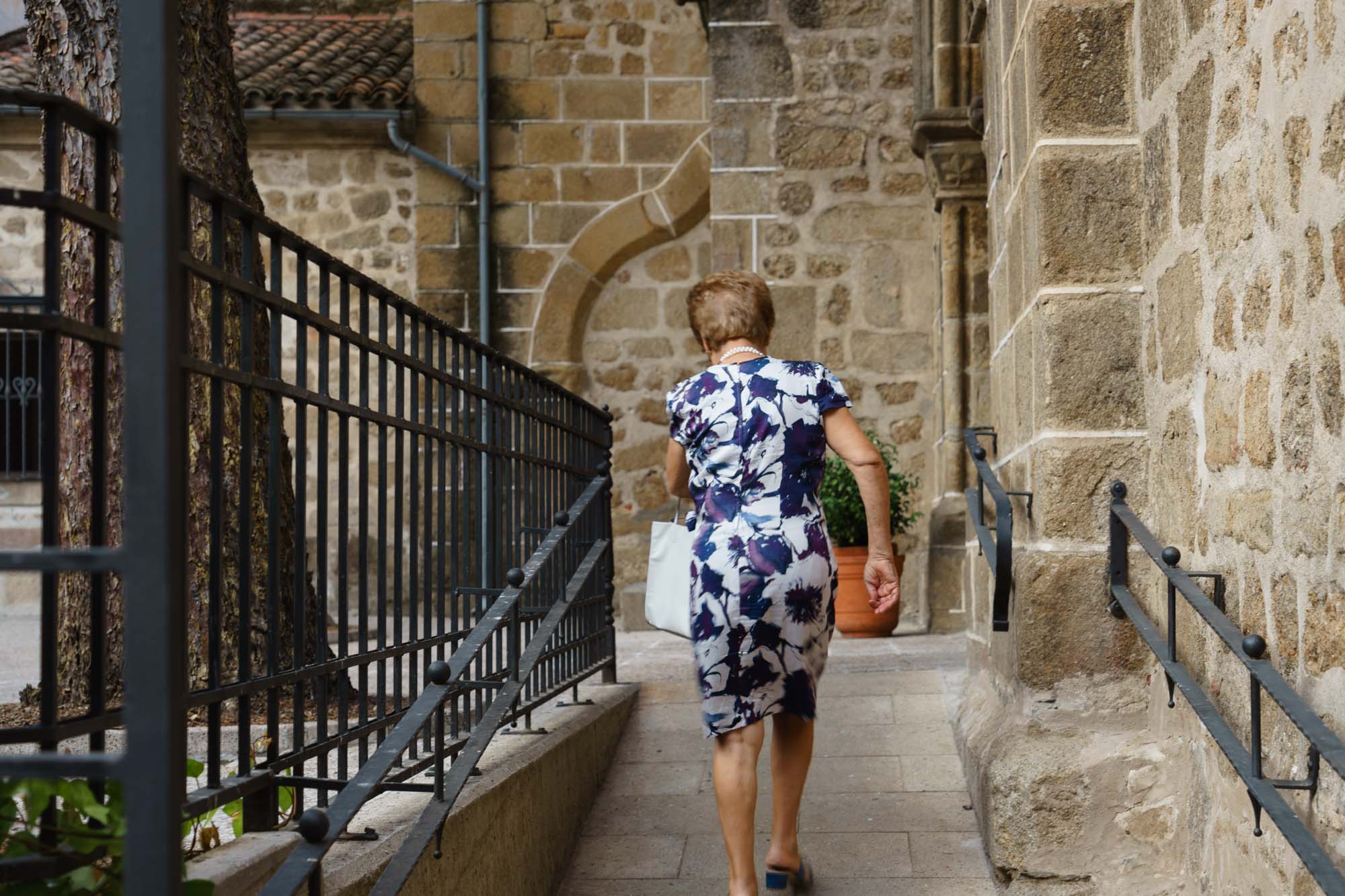 An elderly woman attending mass in the church of San Esteban, 15th century. 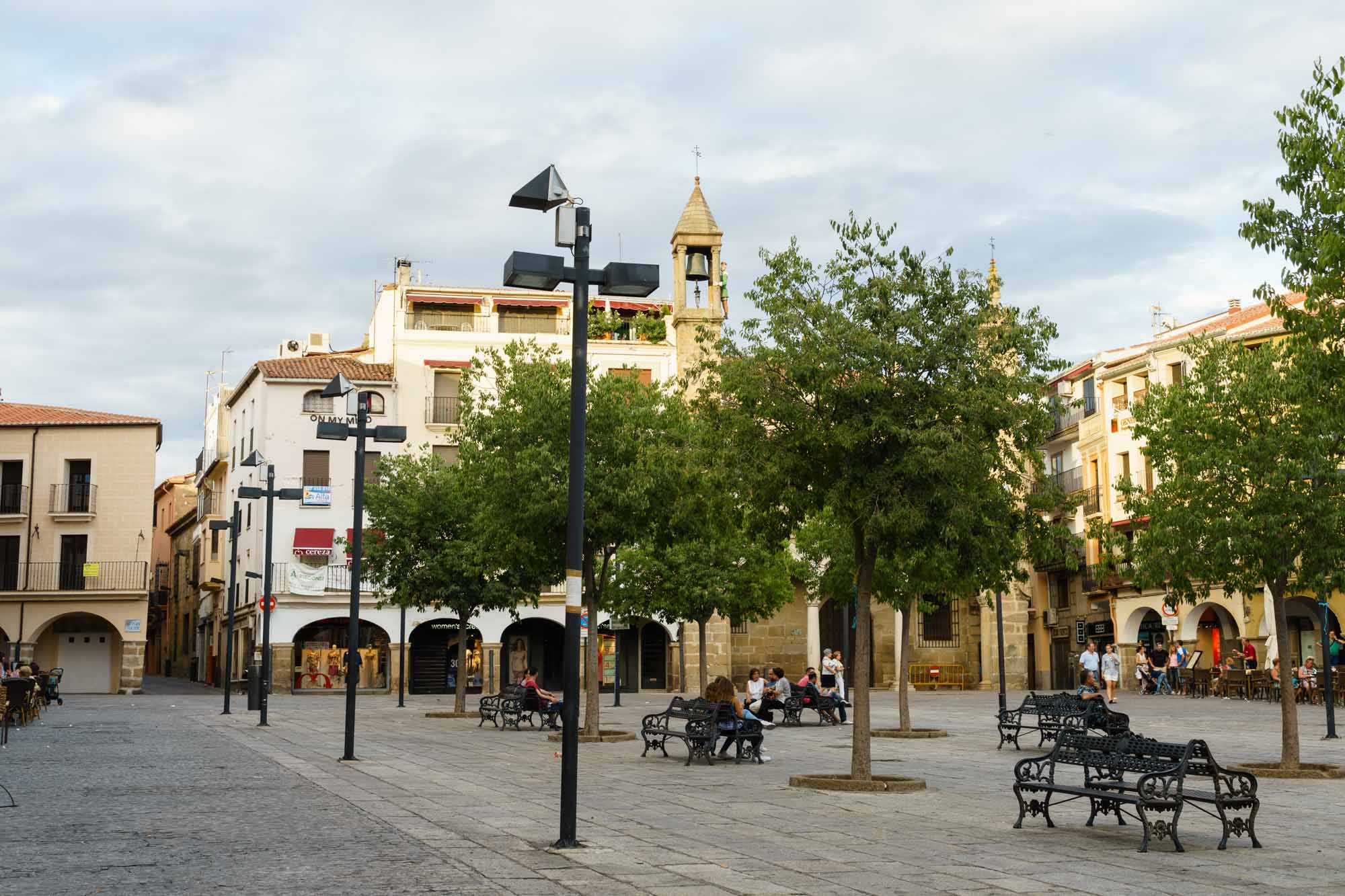 Plasencia’s City Hall is located right in the main square. The palace was built during the 20th century, but was based on the style of 16th-century architect Juan de Álava. 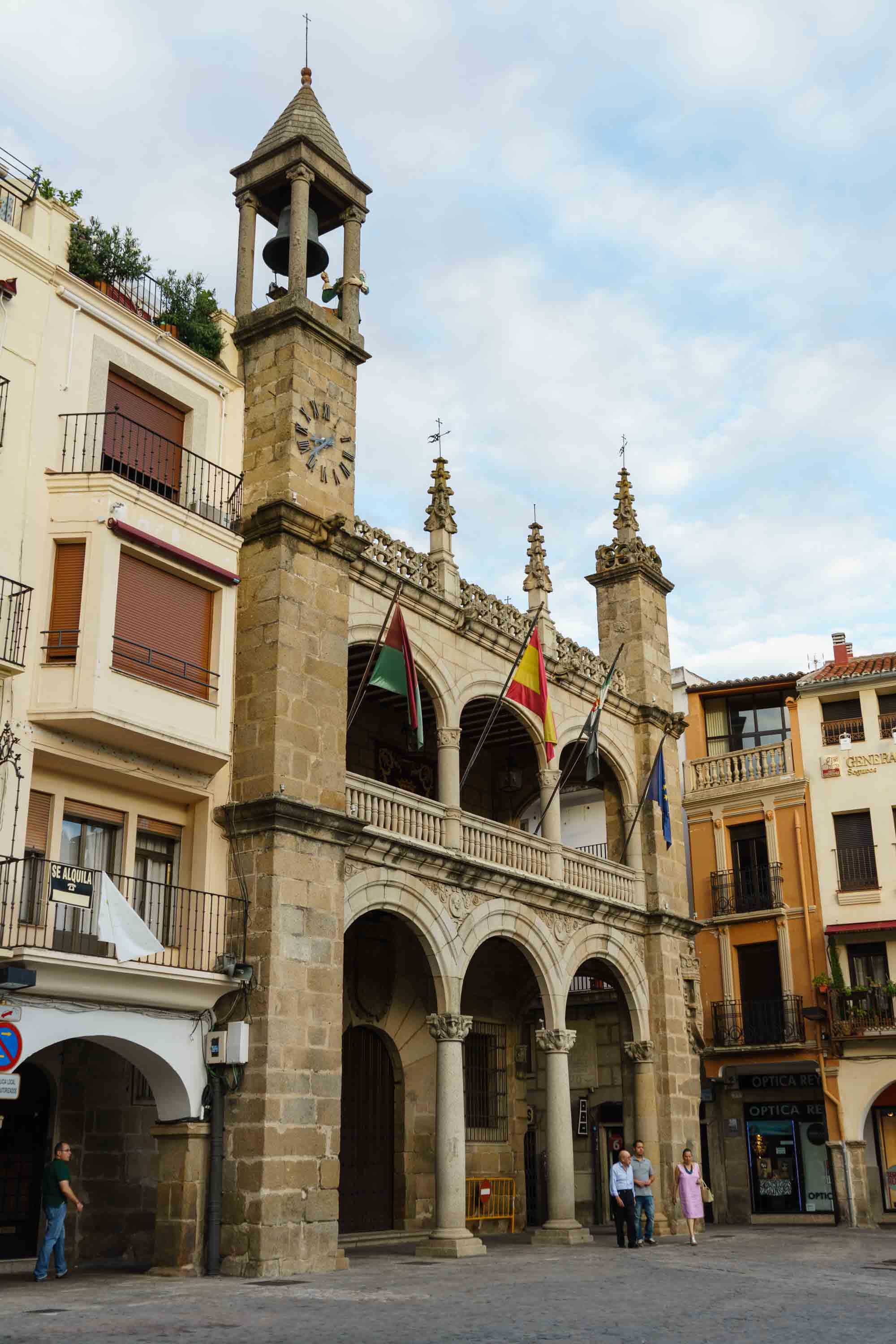 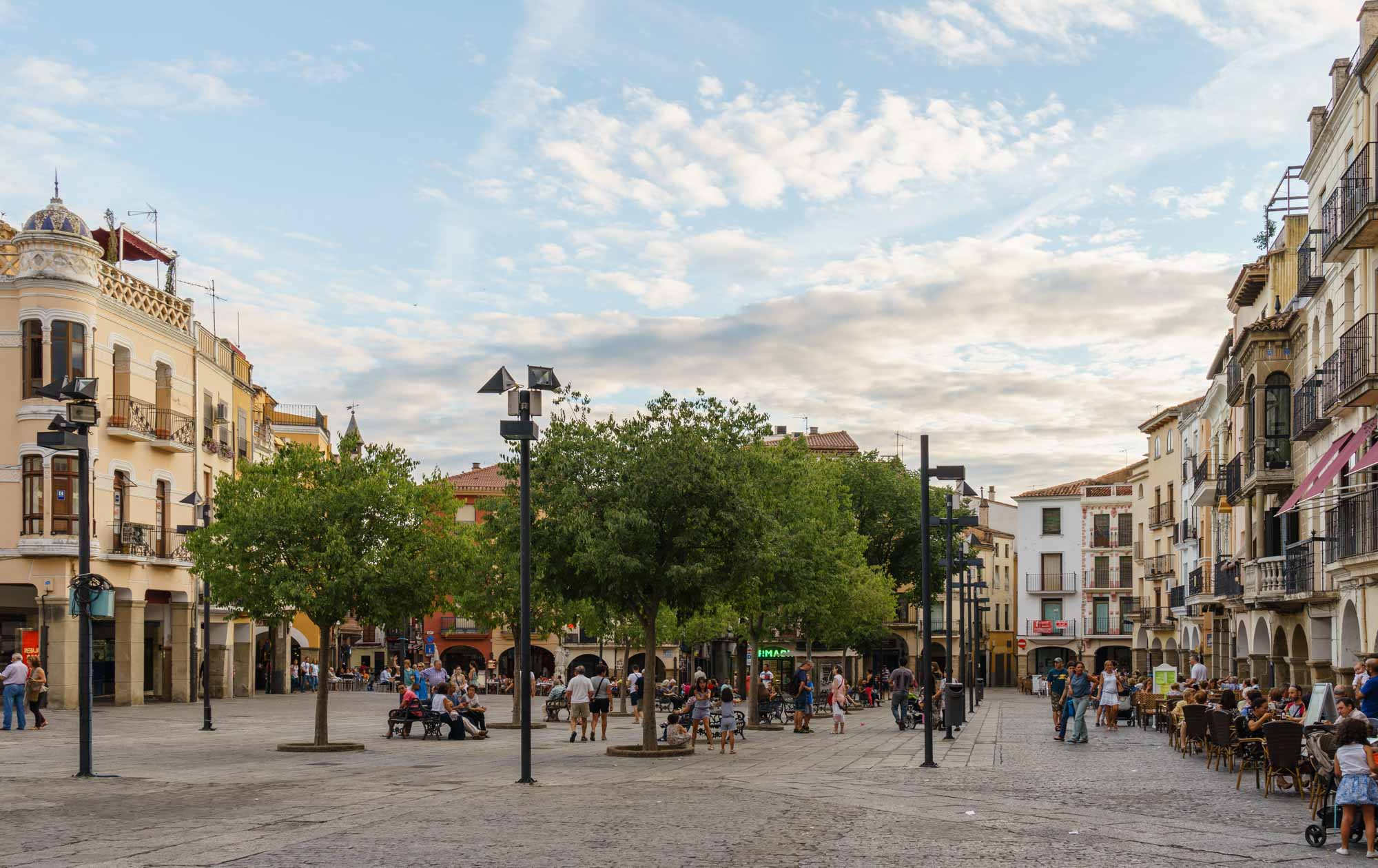 Another thing that separates Plasencia from many other Spanish cities is its main square. In most other medieval cities across Spain, the main square has been almost completely taken over by tourism-oriented businesses. Unfortunately, that means long-time residents can’t enjoy these places anymore due to artificially inflated prices. In Plasencia, however, the main square remains local territory, fiercely defended by its people. Every day you see familiar faces all around, and every bar has someone inside waiting to greet you by name.

I really love Plasencia’s Plaza Mayor and its bars. Alas, that’s a story for another day, for our walk is now reaching the end.

Afterword: first impressions on the camera and lens

All these pictures were casually taken in the scope of a couple hours, while I was still getting used to operating the camera’s basic controls. With that in mind, please excuse any technical errors you may have noticed.

I fully intend to do more walks like this in the future as I get more comfortable with the camera. For a first contact, though, I’m pretty happy with how things went. If you’d like to see the full resolution pictures, they’re available as a Flickr album. 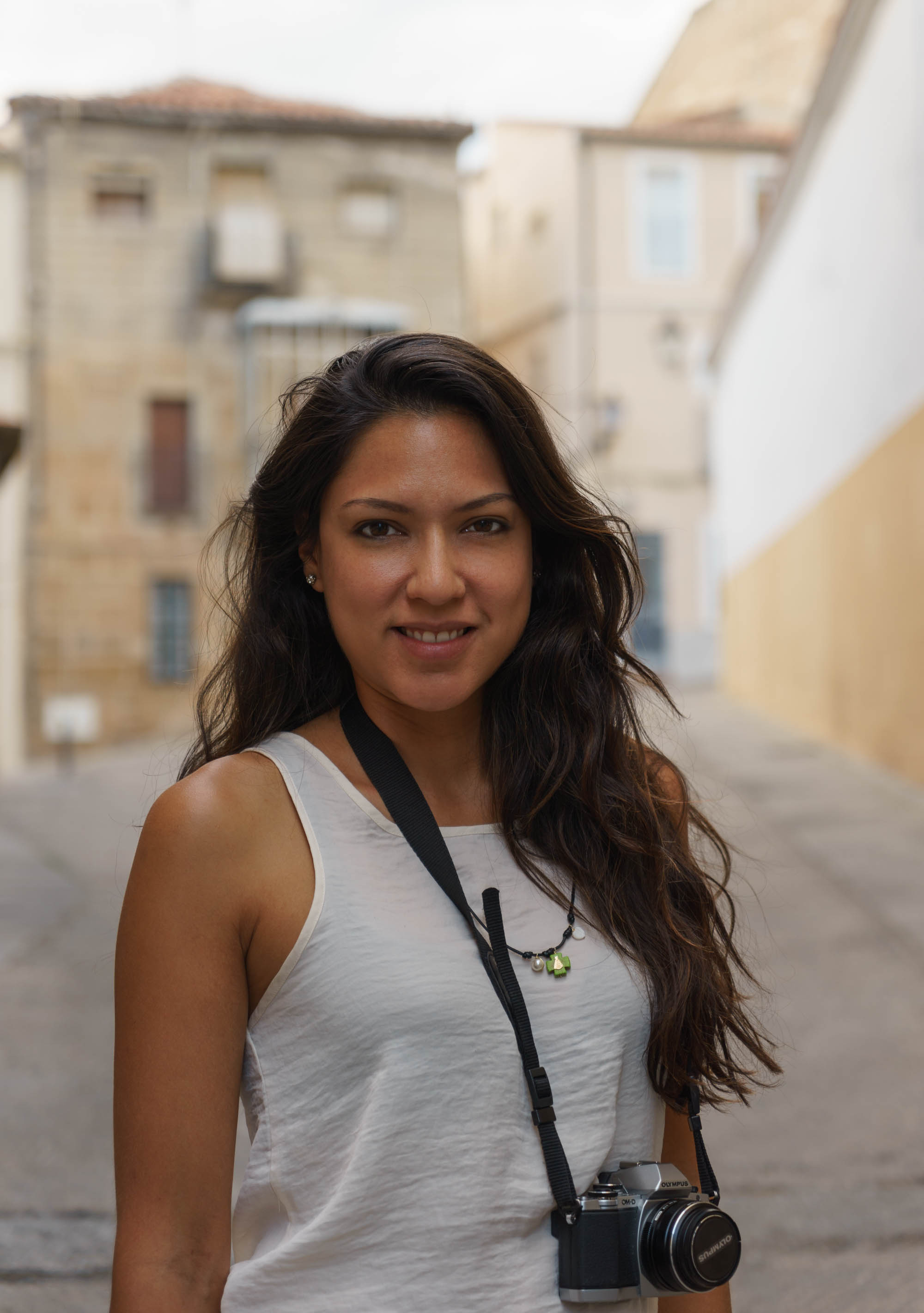 To be perfectly honest, my first impressions on the Sony A7 II could hardly be any better. After just a few hours of use, it feels like a compelling upgrade from my Olympus E-M10 in every way. It’s still early days, though, and the camera is not without its quirks. I expect to slowly get to know my way around it better in the coming weeks.

I’m similarly impressed with what I’ve seen from the Zeiss 24-70mm f/4 lens so far. The build quality is excellent, and the lens handles like a dream. In a couple quick comparison shots I’ve taken, it’s also clearly sharper than my Olympus 17mm f/1.8 prime on my E-M10, when both lenses are shot at comparable settings (17mm f/2 for the Olympus, 34mm f/4 for the Zeiss). That’s impressive performance indeed. I’ve noticed soft corners at 24mm wide open, but that’s something I’m more than happy to live with in exchange for everything else the lens has to offer. Only time will tell if it becomes an everyday shooter for me — after all, I’m a primes-first man — but for now it’s shaping up to be an excellent travel lens, at the very least.

On the not-so-great aspects I’ve noticed, I’ll say handling of the A7 II’s RAW files in Lightroom seems finicky, to put it mildly. I’ve struggled to find a camera calibration profile I like, and there are wide reports on the Internet of people being unable to replicate the colors they get with their JPEG shots when shooting RAW. This is apparently an issue that affects all A7-series cameras, by the way. That said, I don’t mean to knock Sony down over this — after all, it could very well be a Lightroom-related issue. In any case, I suspect it’ll be a matter of learning how to process the files better, but it’s a problem I never really faced with the Olympus camera, so there’s that.

Finally, I’m looking forward to spending more time with the camera and really getting to know all its features better. I feel like I’ve only scratched the surface of what this thing can do, and I’m super excited to find out what lies ahead for me. 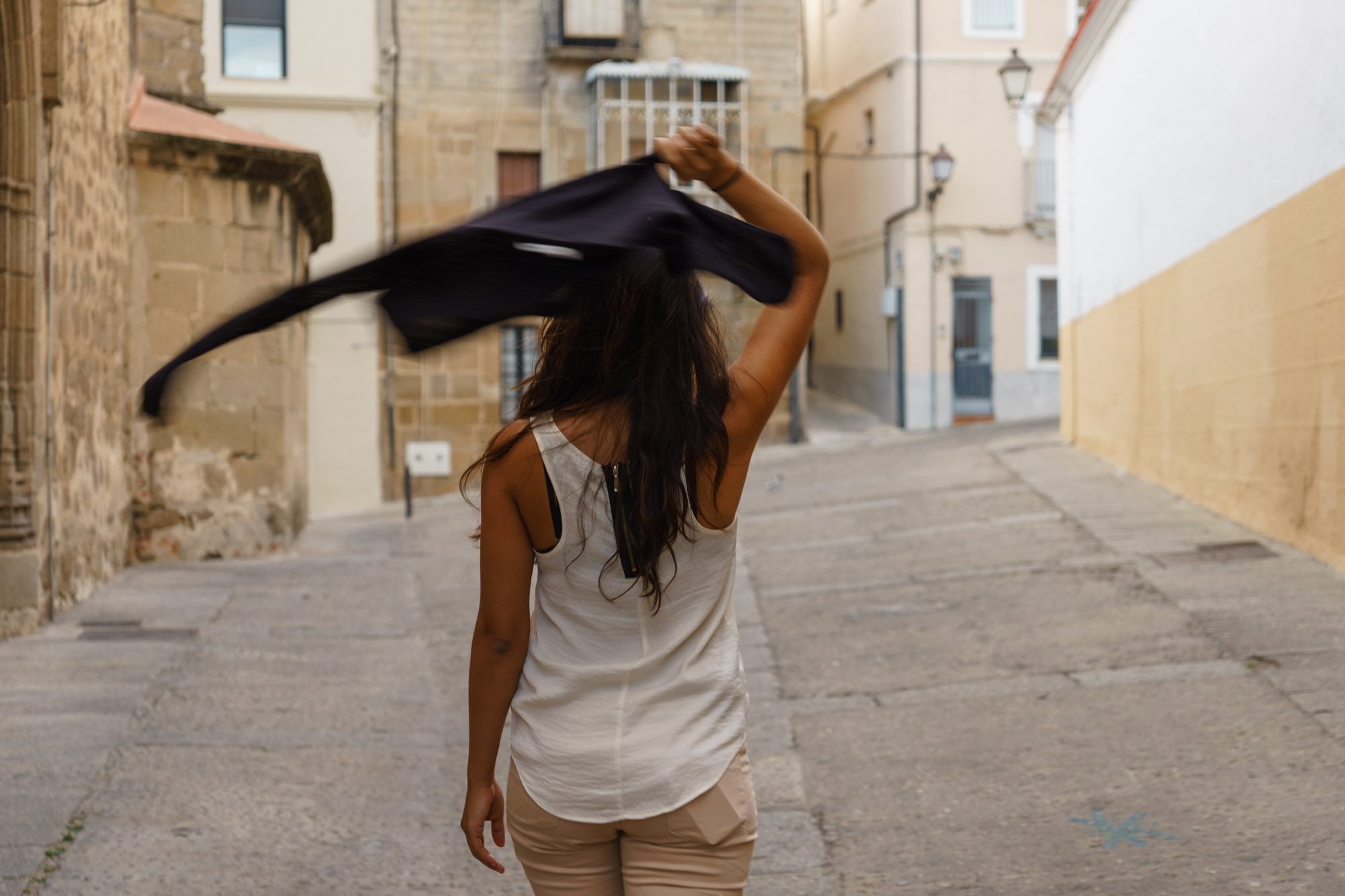