After enjoying quite a few delicious drams of The Balvenie DoubleWood Aged 12 Years, I’m starting to realize I’m a big fan of sherry-finished whiskies. The extra couple years of maturation in sherry oak casks give them a nice mellow finish that is really interesting, and I find I much prefer them to rougher single malts such as Glenfiddich 12.

This is perhaps the first real pattern I’ve come to discover in my journey of exploration so far, and it’s very encouraging. To be perfectly honest, at the beginning I was more than a bit worried I wouldn’t be able to appreciate the subtle variations between different drams but so far, I have yet to find a single malt without a well defined personality.

Now that I’ve managed to establish my love for sherry-finished whiskies, it’s time to step it up a notch and try a full sherry oak single malt, and what better way to do it than with the name that is perhaps the most coveted and recognized in the world of Scotch whisky: The Macallan.

This particular denomination, The Macallan 10 Year Old Sherry Oak, is the youngest of them all, and it used to be a staple in the company’s portfolio until it was discontinued a couple years ago. This seems to be a recurring theme, with both the 12 Year Old and 18 Year Old Sherry Oak denominations becoming harder and harder to find in recent months. 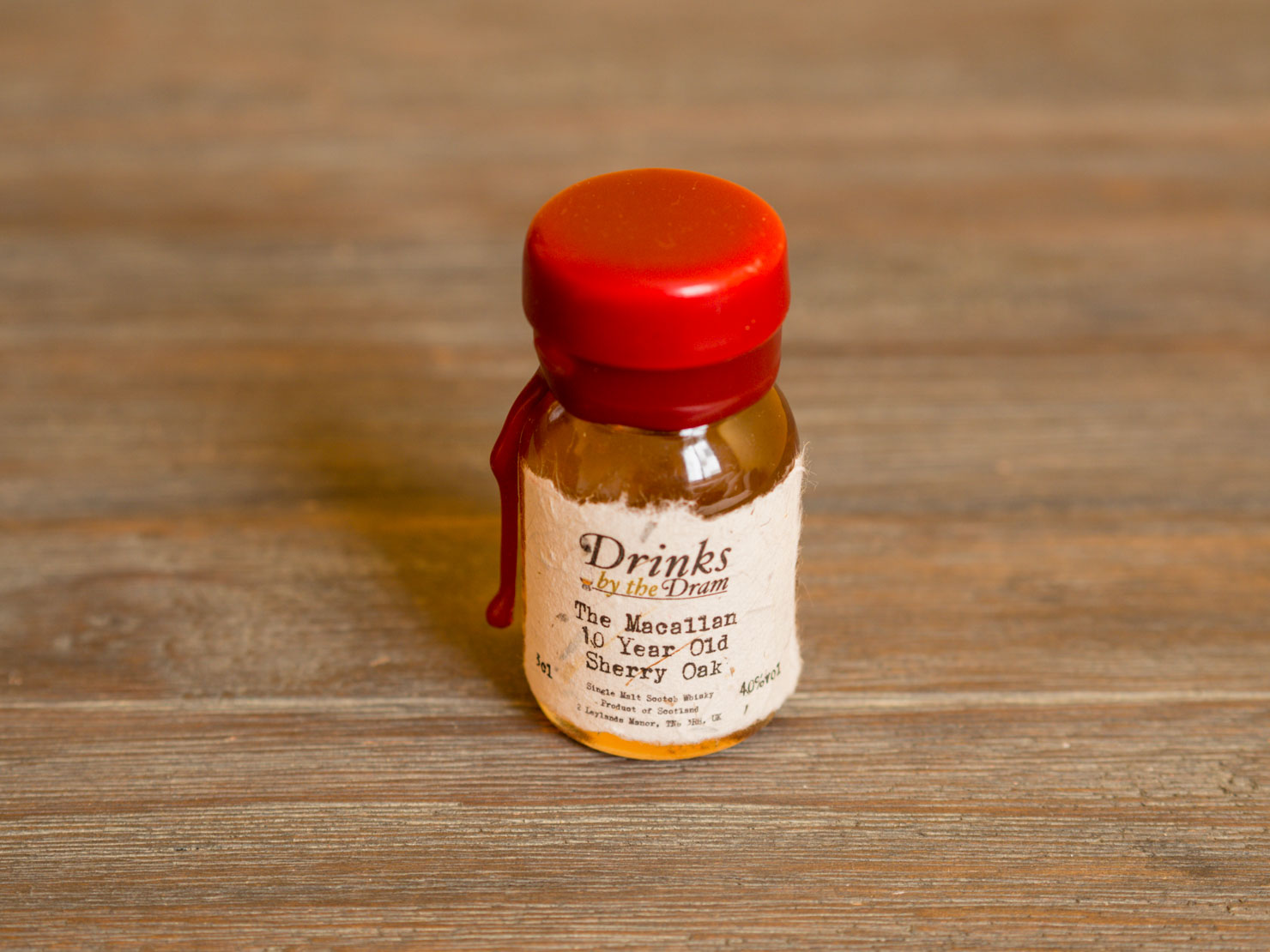 Founded in 1824 by Alexander Reid and located in the village of Craigellachie, The Macallan is one of the oldest and most renowned distilleries in Scotland. The spiritual home of the Macallan brand is the Easter Elchies House, a gorgeous Highland mansion built for Captain John Grant in 1700.

Traditionally considered a Speyside single malt, The Macallan now labels their bottles as Highland single malt whisky, following a change in regulation that stopped including Craigellachie in the Speyside region in 2009.

Later that year, The Macallan overtook Glenfiddich to become the second largest-selling single malt in the world by volume, trailing only Glenlivet. It is indeed one of the most valuable brands in the world of whisky, and it’s always enjoyed a stellar reputation among whisky connoisseurs. 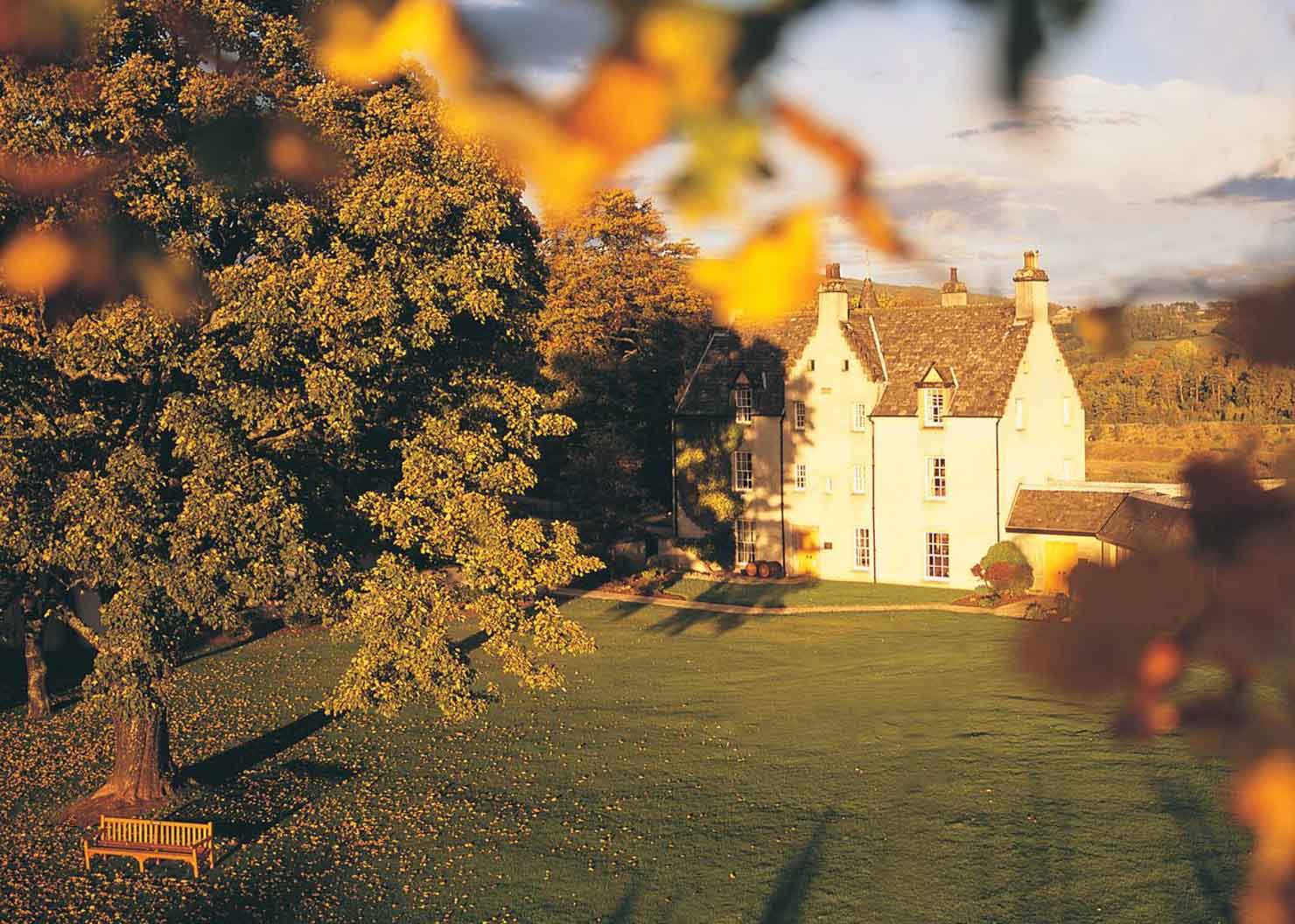 Easter Elchies House, the spiritual home of The Macallan since 1700. Photo credit: The Macallan.

According to their own website, The Macallan distillery uses “the smallest stills on Speyside”. These small stills apparently give their whisky some of those rich, fruity flavors so commonly associated with The Macallan.

The Macallan whiskies used to be exclusively matured in sherry oak casks, but in 2004 they introduced the Fine Oak series, which uses bourbon oak casks instead. The original Sherry Oak series is what gave The Macallan most of its fame, but the newer Fine Oak series has been generally well received by critics as well. Nowadays, both series have been discontinued, with the new 1824 series replacing them in most markets. 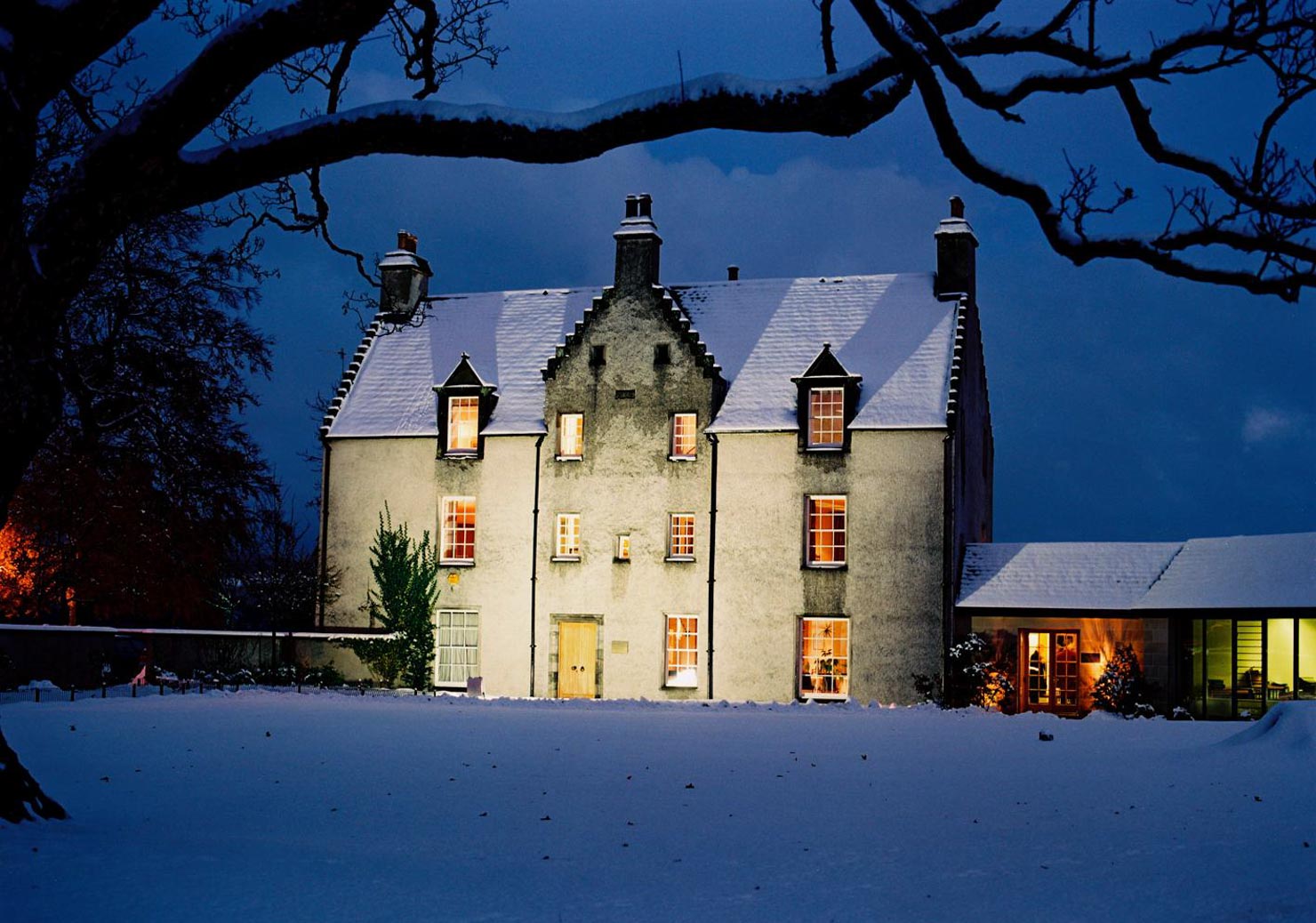 Easter Elchies House in the snow. Photo credit: The Macallan.

In general, The Macallan is moving away from having explicit age denominations in their collection, effectively leading a trend that is already becoming the new normal among some of the most established distilleries in Scotland.

Personally, I’m a fan of age denominations, although I realize there’s not much science to support this belief. By all accounts, all denominations in the new 1824 series are excellent single malts, but there’s still something about not having an explicit age denomination that rubs me the wrong way, for whatever reason.

Simply put, this is a whisky like no other I’ve tried before. It’s matured exclusively in sherry oak casks brought to Scotland all the way from Jerez, Spain, a city made famous by its sherry production. Compared to sherry-finished whiskies like the Glenmorangie Lasanta and The Balvenie DoubleWood, The Macallan is decidedly darker, and I’d rate it between a 1.6 (mahogany, henna) and a 1.7 (burnt umber) on the Whisky Magazine color chart:

The presentation is extremely elegant and classy, just like the rest of their lineup, and adds to the overall sense of luxury that the brand so effortlessly exudes. 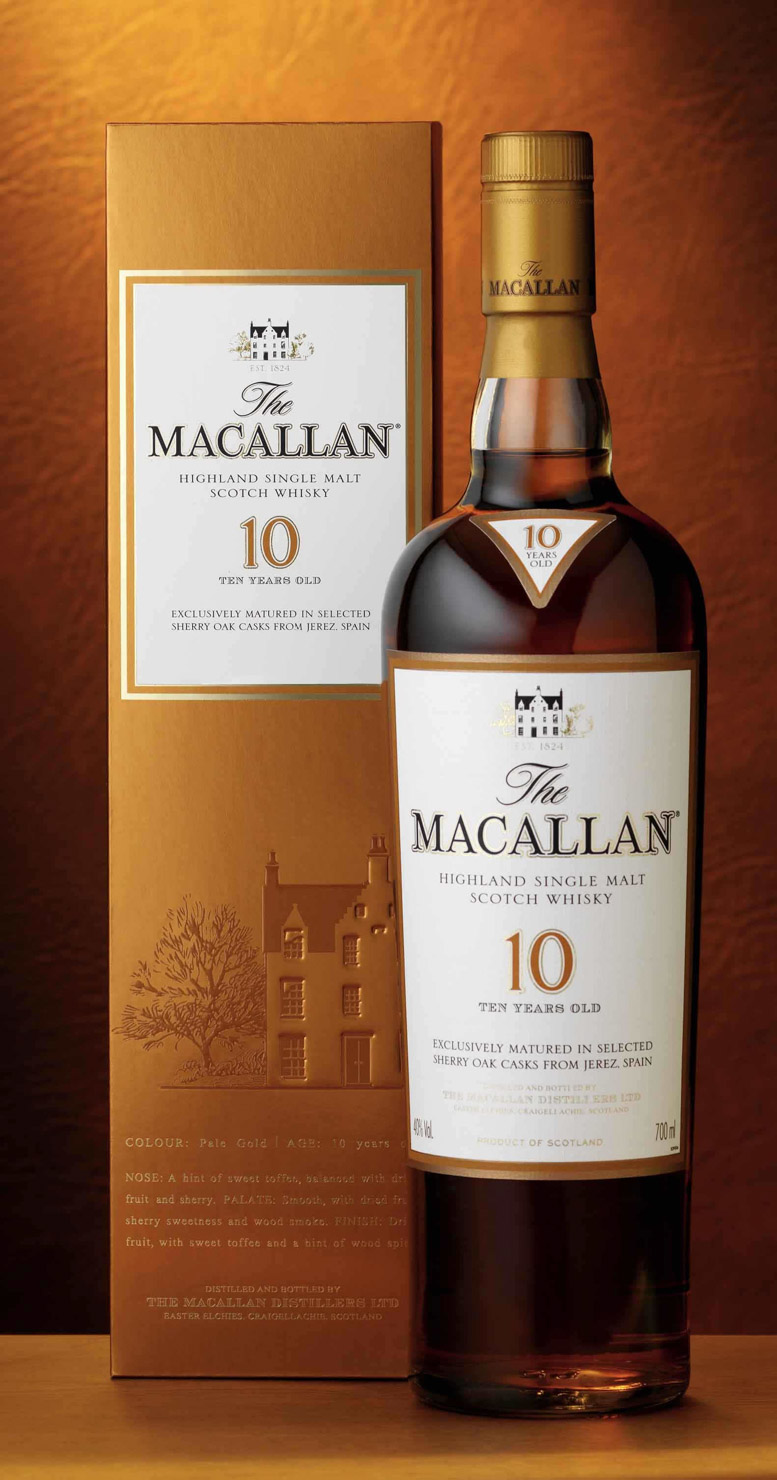 It’s just fantastic. I’ve spent 2 good hours just smelling it while typing the beginning of this article, and I just can’t get enough of it. Caramel and honey are almost impossible to miss, but there’s a good bit of complexity here, too. Fresh oranges are also in there somewhere, along with a hint of nuts. It’s incredibly well balanced and in this case, the total is way more than the sum of its parts. I love it. 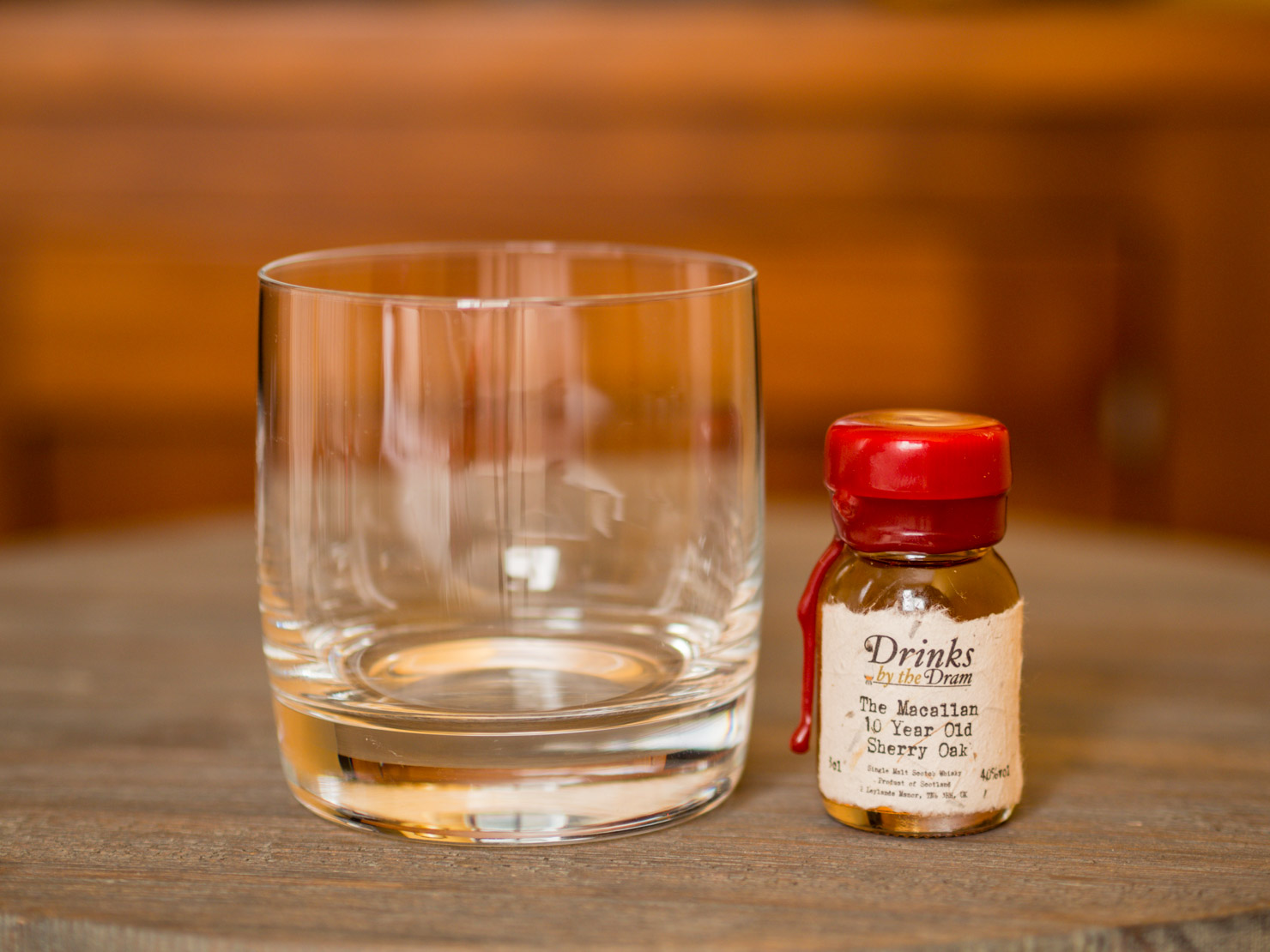 I’ve never tried a whisky as silky and smooth as this one. It just caresses you on the way down. It’s perhaps a bit less complex here than in the nose, but it retains the same charm and wonderful personality. An easy drinker, for sure.

The Macallan 10 Year Old Sherry Oak is bottled at 40%, so water should be used sparingly, if at all. I honestly don’t think adding more than a couple drops will do you any favors, and you run a significant risk of drowning it. Just take your time and enjoy it as-is. It’s well worth it. 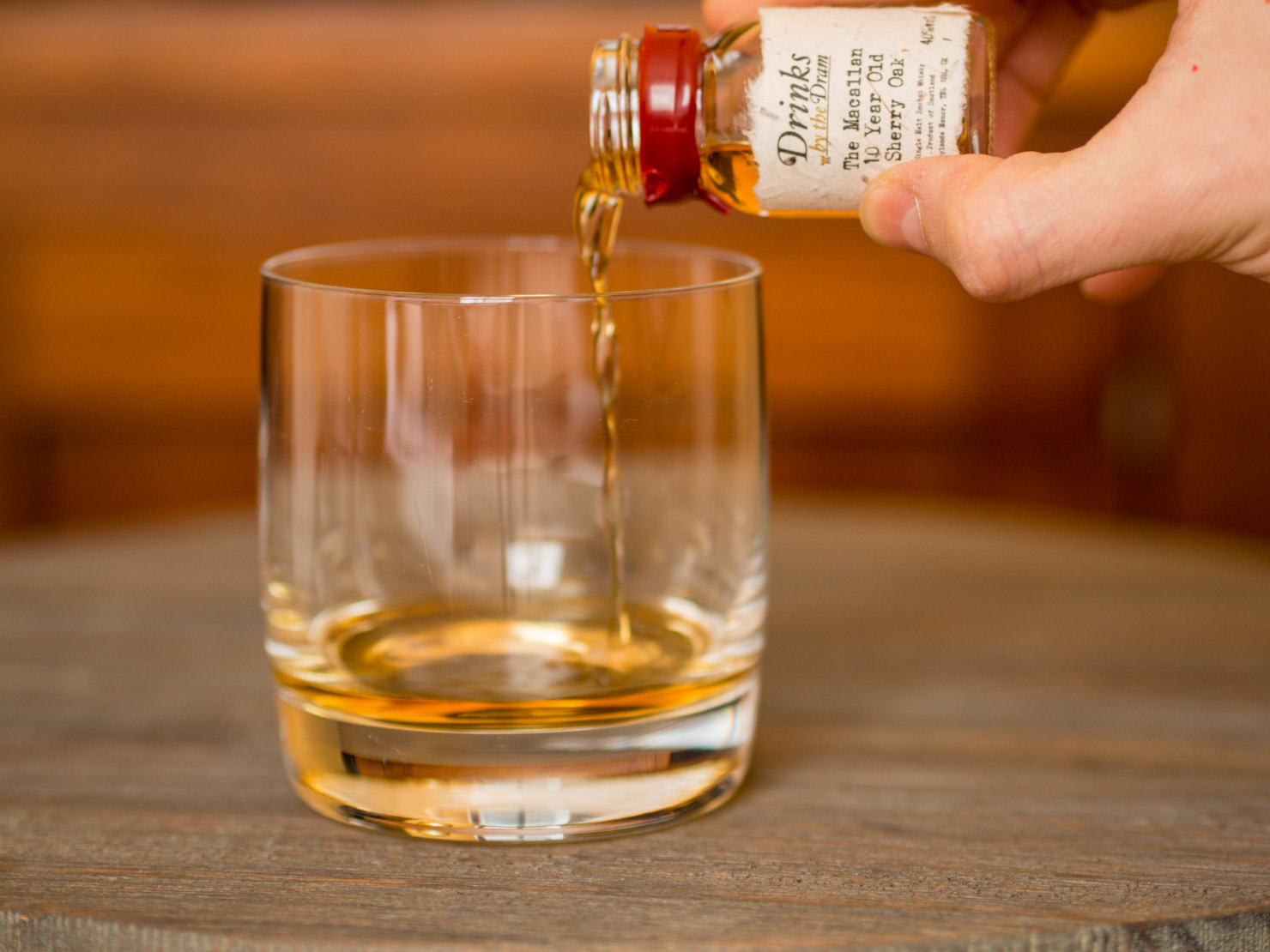 Here, the initial fruitiness is dominated by the same orange notes as in the nose, but they’re soon eclipsed by some wood and a tiny bit of spice. No trace of peat in this one, at least not that I could see.

I couldn’t find an “official” review, since this particular denomination has been discontinued, but the folks at Master of Malt say that “there are notes of walnut and salty melted butter. Hints of fudge and crème anglaise.” I don’t know about crème anglaise — my culinary culture is not that refined, I’m afraid — but I’d say the rest of it sounds about right. Butter is definitely not the first thing I would have mentioned, but I suppose I can see it if I try really hard. Anyway, choose whatever descriptive terms you see fit, but know that at the end of the day, this is a mighty fine whisky. 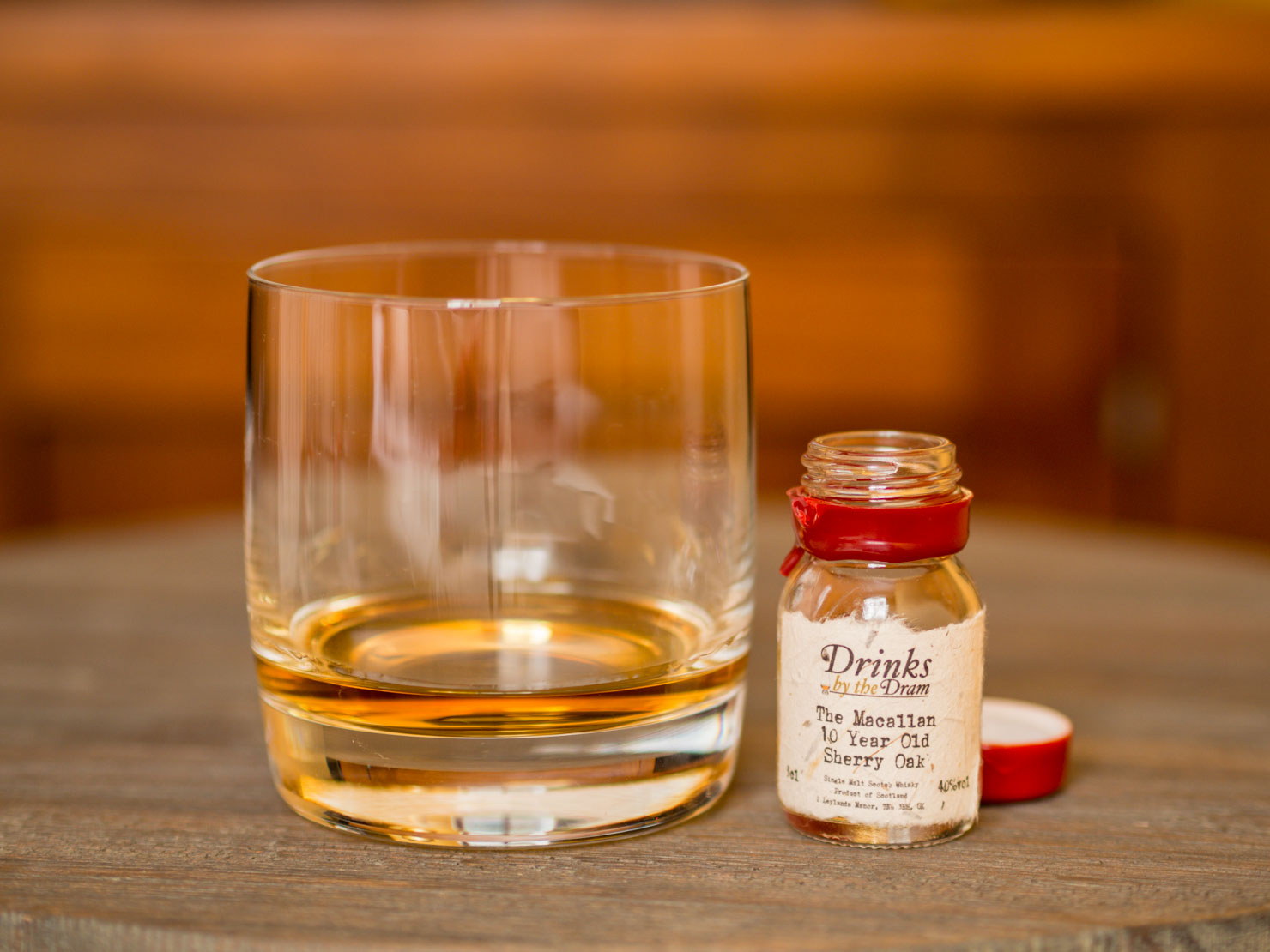 It’s very pleasant, but a bit shorter than I’d like. The same wonderful honey accents I noticed in the nose — but were conspicuously absent in the palate — reappear here, and stay at the back of my throat for a little while. However, as nice and mellow as the finish is, my eagerness to take another sip is always stronger than my desire to enjoy the aftertaste. Is that a bad thing? Not in my book. 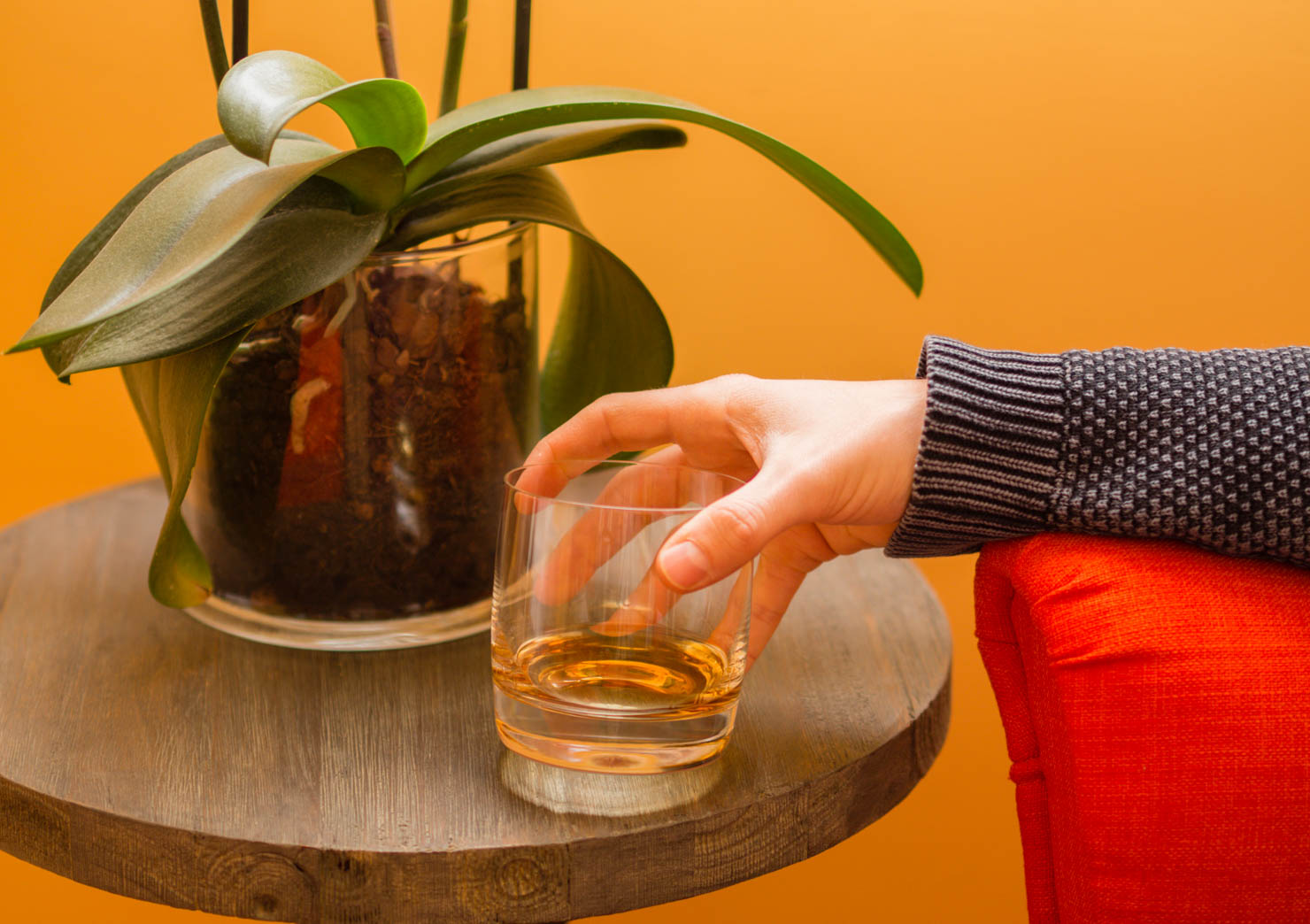 It really is too bad Macallan decided to discontinue the 10 Year Old Sherry Oak, because this wonderful single malt punches well above its weight. Normally, younger whiskies like this one are preferred in socially relaxed atmospheres like pubs, but The Macallan follows its own set of rules. This single malt would feel right at home in the most select venues, be it in the Casino in Monte Carlo or in Piazza San Marco in Venice, but it also makes for the perfect evening sipper on a nice spring day in your local watering hole. Perhaps that’s the key to The Macallan’s success: attainable luxury with impeccable credentials and flawless execution for the discerning customer. Sounds like a winner to me. 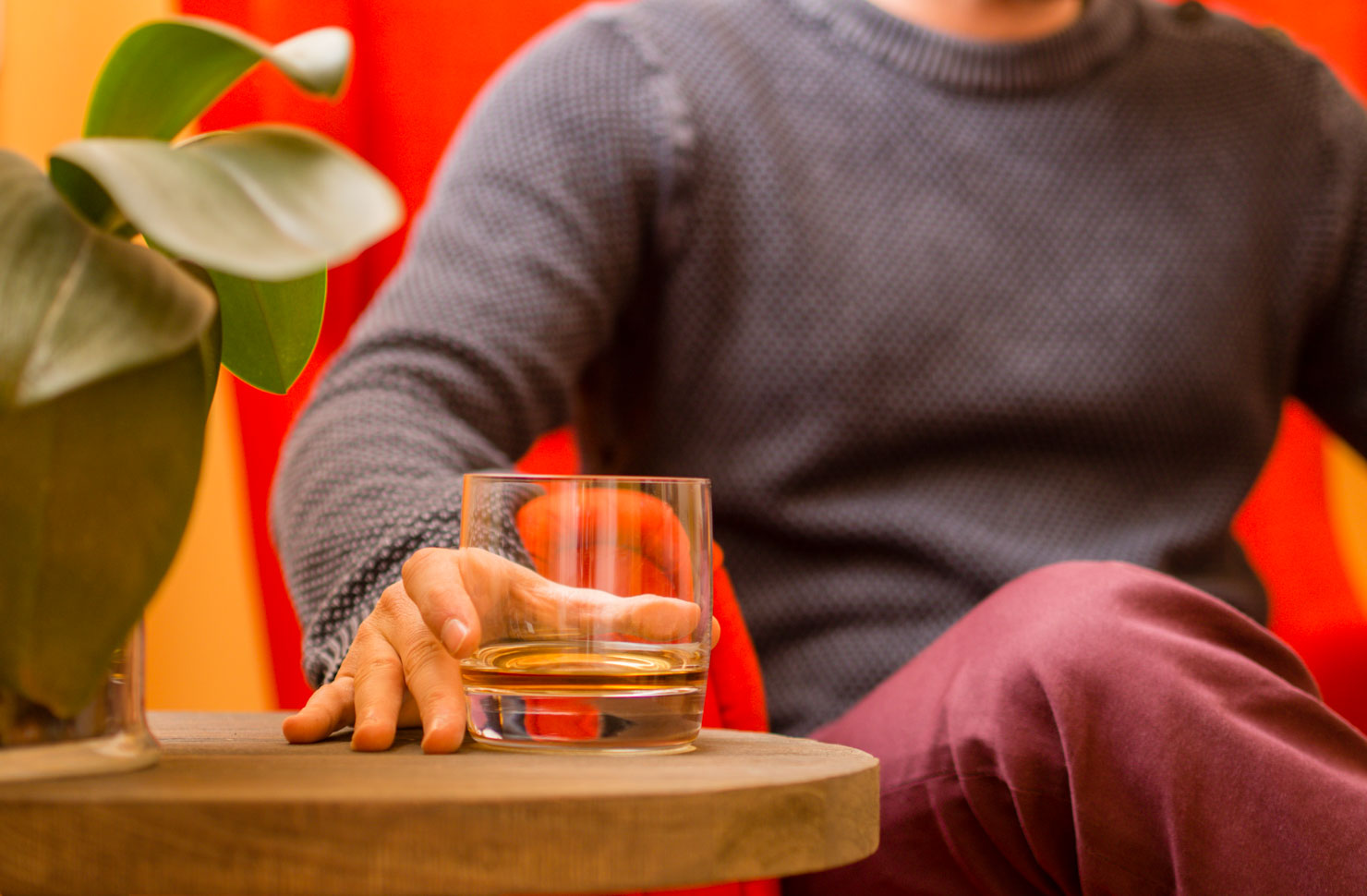 The Macallan 10 Year Old Sherry Oak used to be the perfect entry into the single malt world because its price vs. quality ratio was simply unmatched by anything else in the industry. Back in the day, bottles of this whisky used to go for about $40 a piece but now that it’s discontinued, prices have gone up considerably. If you can get ahold of a bottle at a reasonable price, just go for it. You won’t regret it.

If this single malt was still widely available, it could very well challenge The Balvenie DoubleWood as my social drink of choice. Unfortunately though, the chances of finding it in the wild today are pretty much nonexistent, so you’ll have to look elsewhere for your social enjoyment.

Disappointingly, the current Macallan Amber, which also claims to be matured exclusively in sherry oak casks, is nowhere near as mellow and well-wounded as the 10 Year Old Sherry Oak. I find it to be a lot rougher around the edges, and not to my taste at all. Therefore and until I find a proper replacement, The Balvenie DoubleWood Aged 12 Years will continue to be my go-to single malt for late night drinking and socializing with friends.

The worse thing about this whisky is that after trying it, I’m just incredibly curious about The Macallan 18 Year Old Sherry Oak, the crown jewel and the most iconic denomination in The Macallan’s range. But I’m getting way ahead of myself here.

The Macallan 18 Year Old is big game, and I must finish my journey through the rest of the younger single malts first. Patience is key but rest assured, dear reader, we’ll get there soon enough.