After a brief introduction to single malt Scotch whisky, this is where the fun begins. For my first ever single malt tasting, I have selected none other than the best-selling single malt in the world: Glenfiddich 12 Year Old.

Before I begin, though, I’d like to say a quick word about Master of Malt. When I decided to embark upon this journey, I knew I would need a way to procure several whiskies that are pretty difficult to find here in Madrid. Furthermore, since they were only for tasting purposes, I wanted to be able to buy them in small quantities. Scotch whisky can get pretty expensive surprisingly quickly, and I wasn’t exactly looking forward to investing hundreds of dollars in bottles I’m not yet able to appreciate anyway.

Luckily, the fine folks at Master of Malt solved all of these issues with ease. They sell drinks by the dram, which are beautifully bottled in miniature, 3 cl bottles and then sealed with wax. They’re pretty affordable too, with a typical dram going for about 4-6 bucks, so I ordered every whisky on my tasting list from them. All in all, I ordered eleven premium drams and my order still came in at less than $100, shipping included. Talk about a no-brainer.

I received my order in only two working days, neatly packaged in three separate cardboard containers: 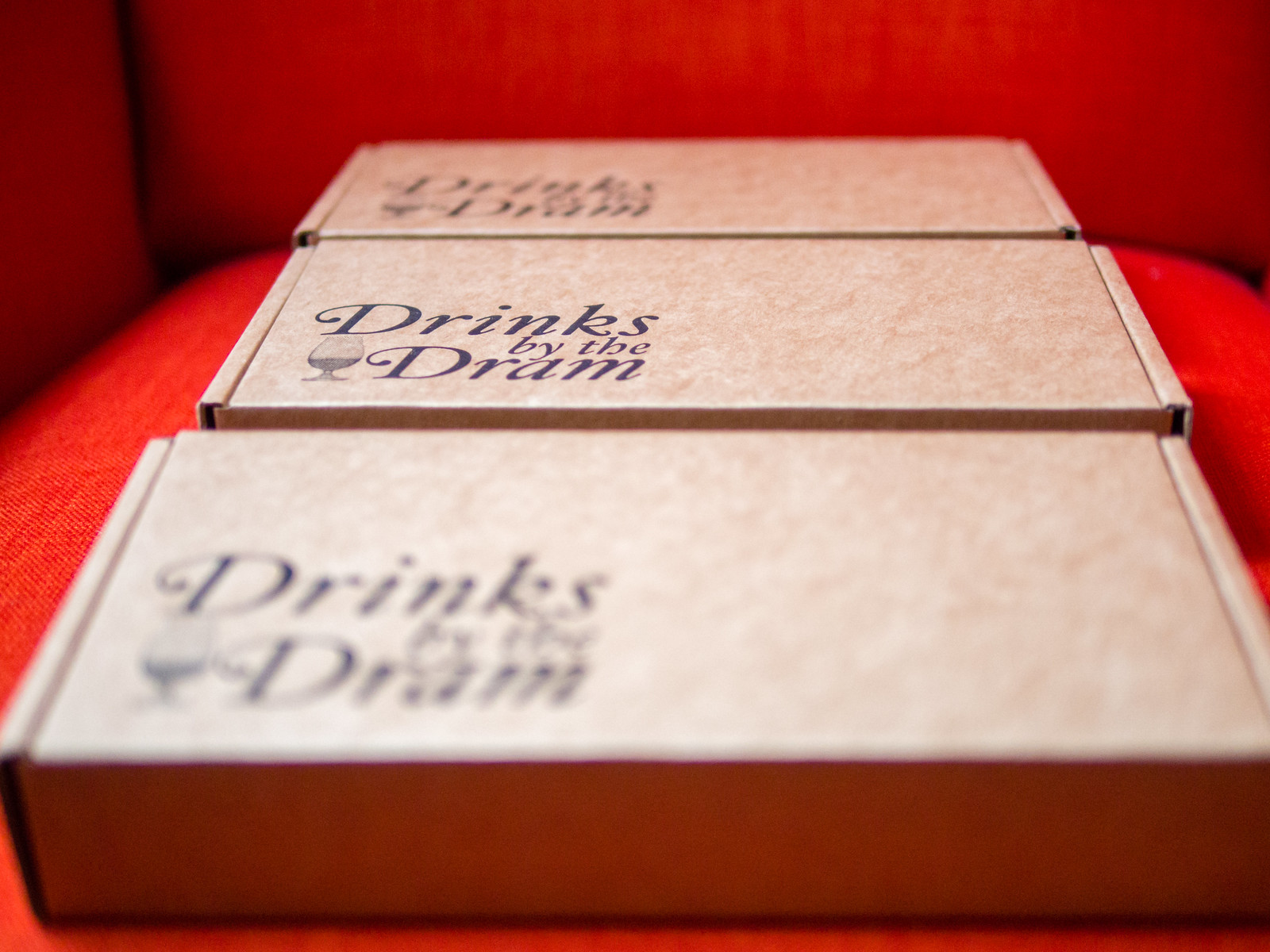 Inside each container there’s room for up to five drams. Since I had ordered eleven drams, they came divided in groups of four, four and three. 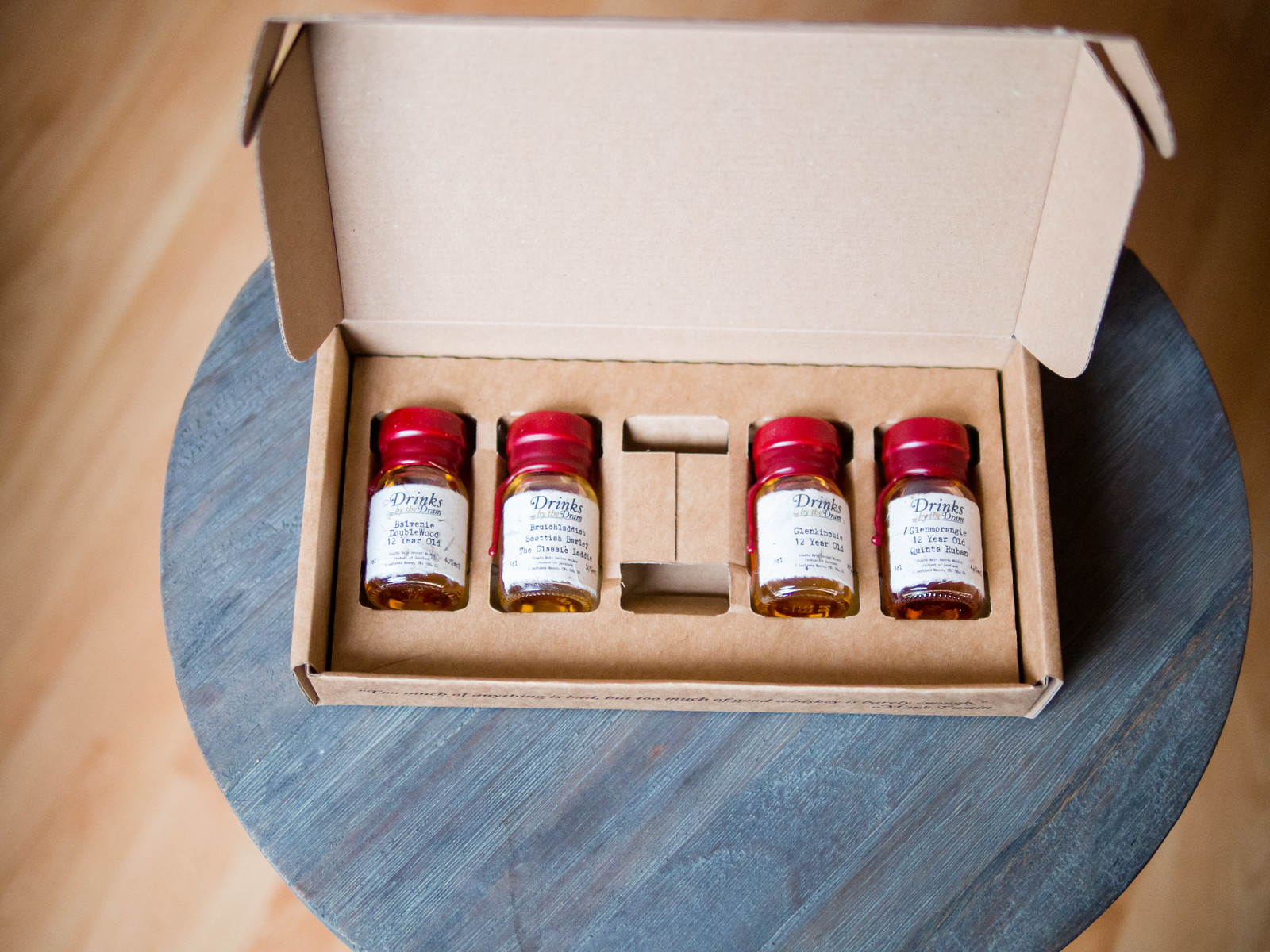 I love the wax seals, they add a touch of luxury while preserving the full aroma of the whisky. This is attention to detail where it matters, not just for show, and it’s great. 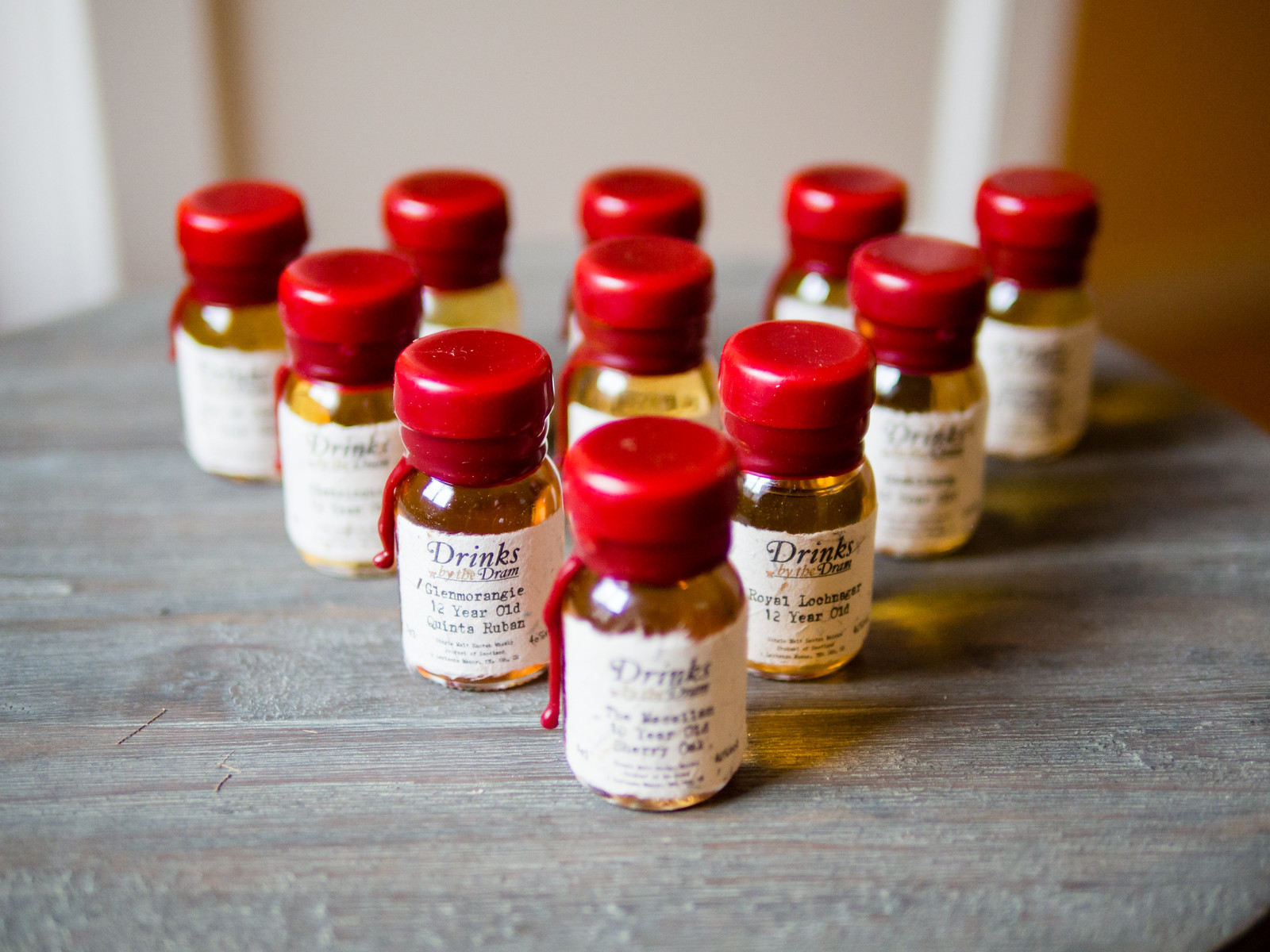 Besides, each dram is identified with a beautifully designed label that contains all the necessary information, including the name of the whisky and its alcoholic content. 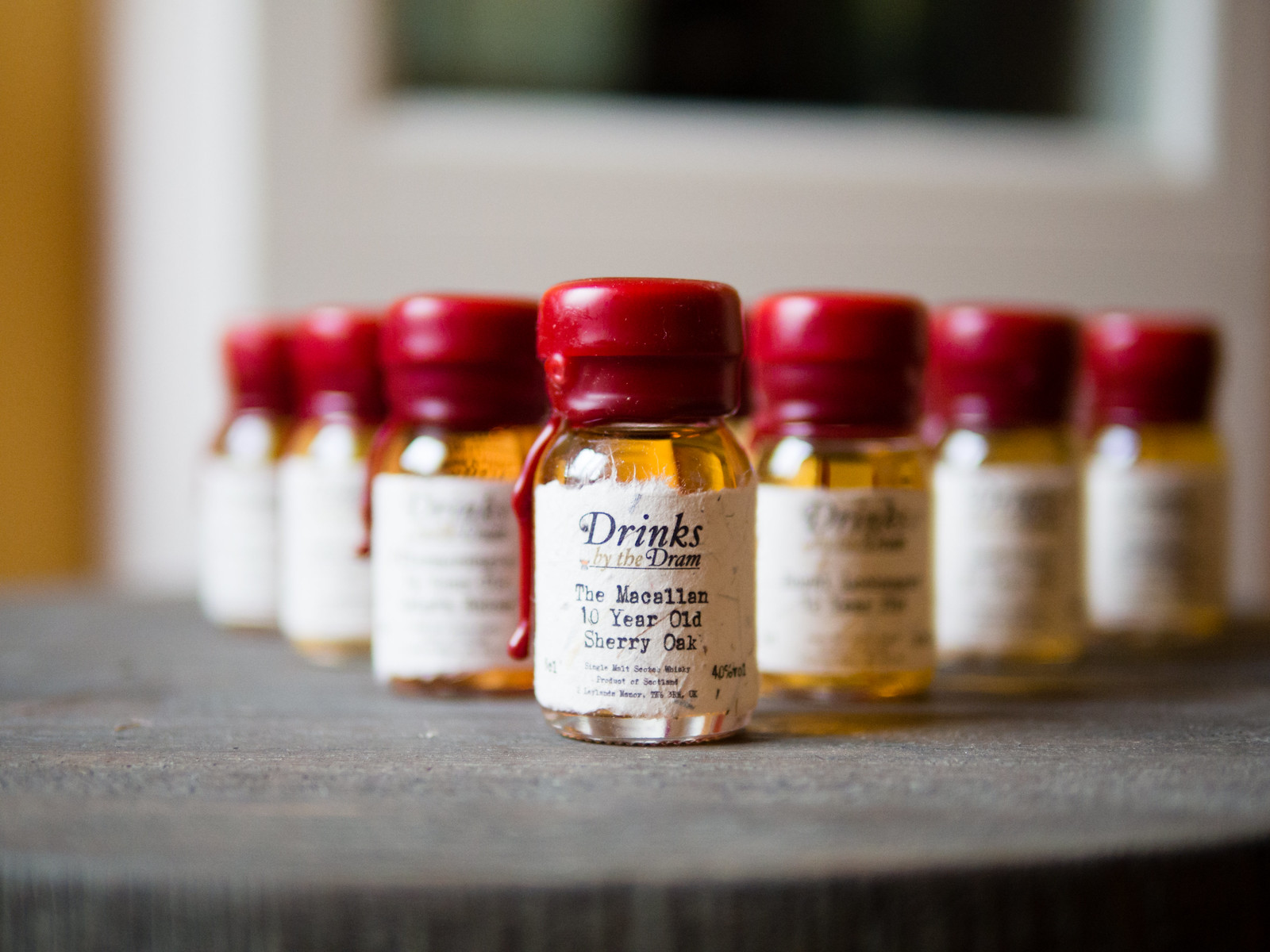 All this to say, I’m extremely happy with Master of Malt. Their impressive selection and fast, reliable shipping will allow me to explore the world of single malt whisky for years to come, all without breaking the bank in the process. I really couldn’t have asked for a better solution. 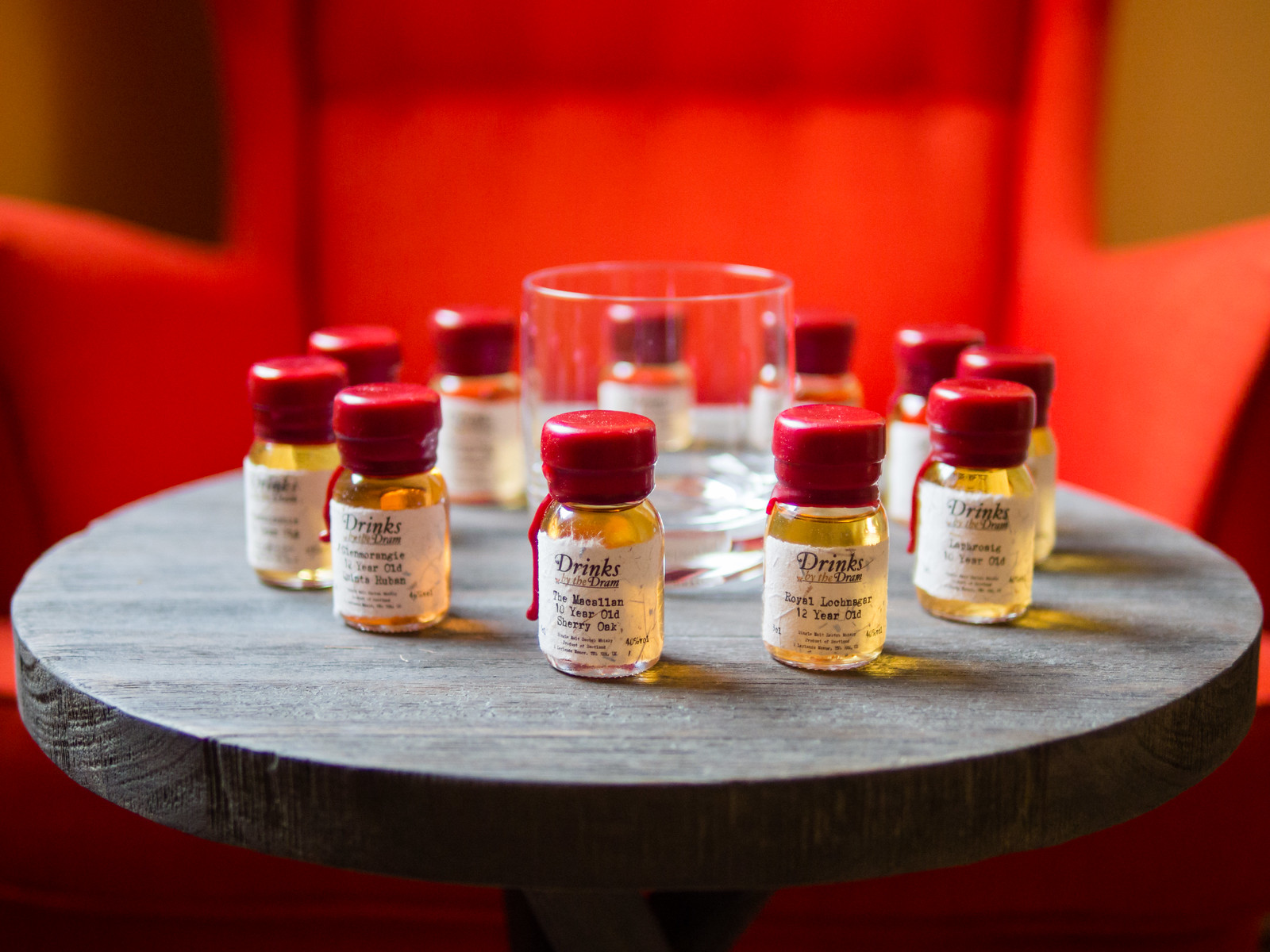 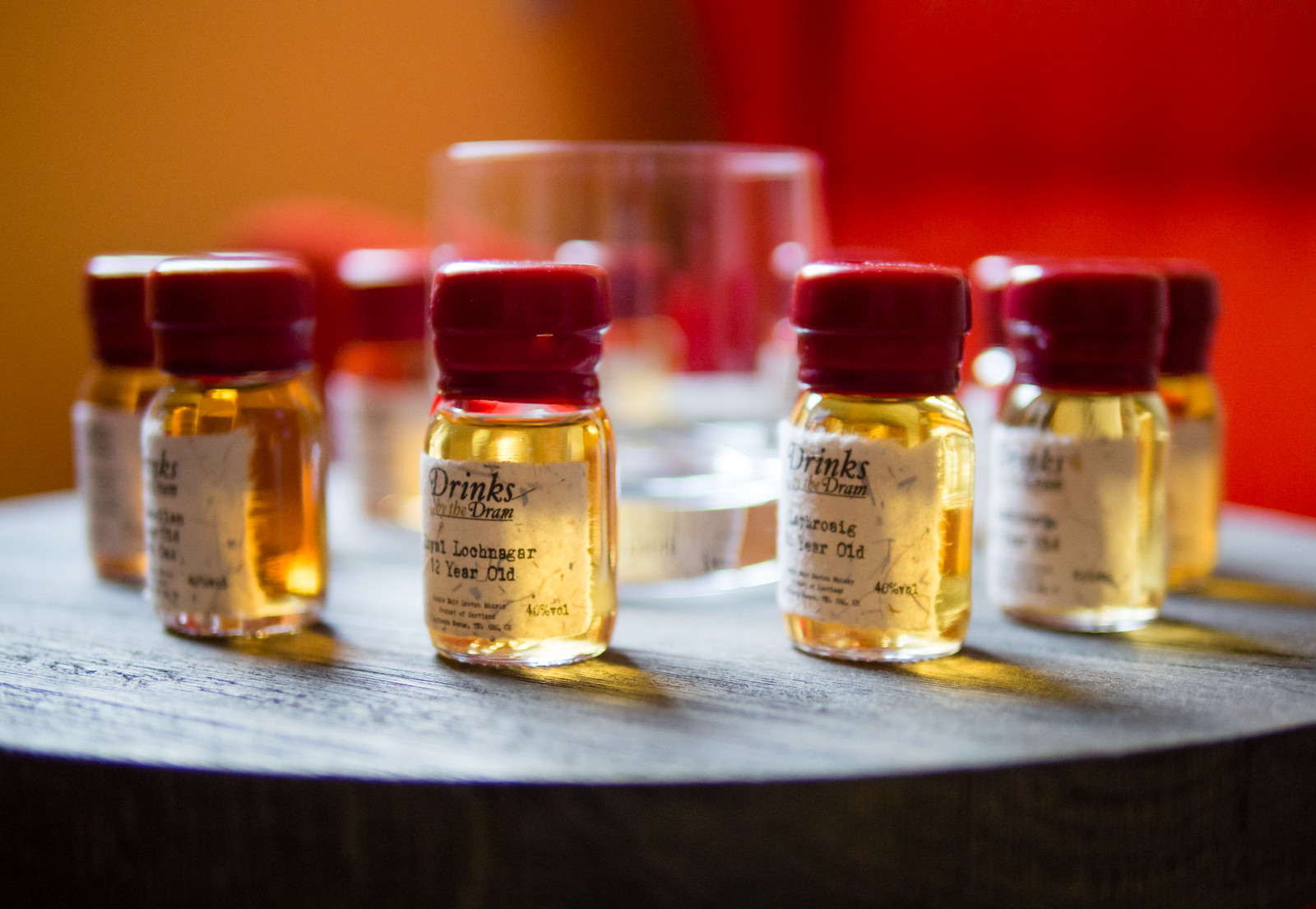 And now without further ado, let’s get down to business.

The Glenfiddich distillery was founded by William Grant in 1886 and is still one of the very few privately owned distilleries in all of Scotland. It is currently managed by the fifth generation of William Grant’s descendants. Glenfiddich means “Valley of the Deer” in Gaelic, where the distillery has been located since its foundation. 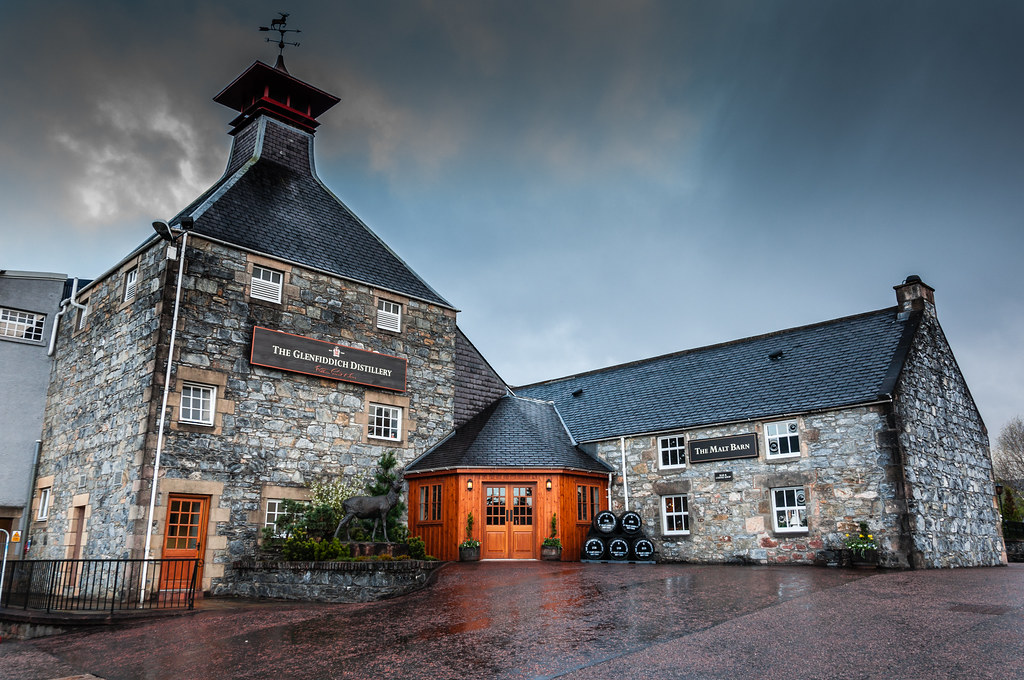 The iconic triangular bottle, designed by Hans Schleger, has been associated with the Glenfiddich brand ever since its introduction in 1957. 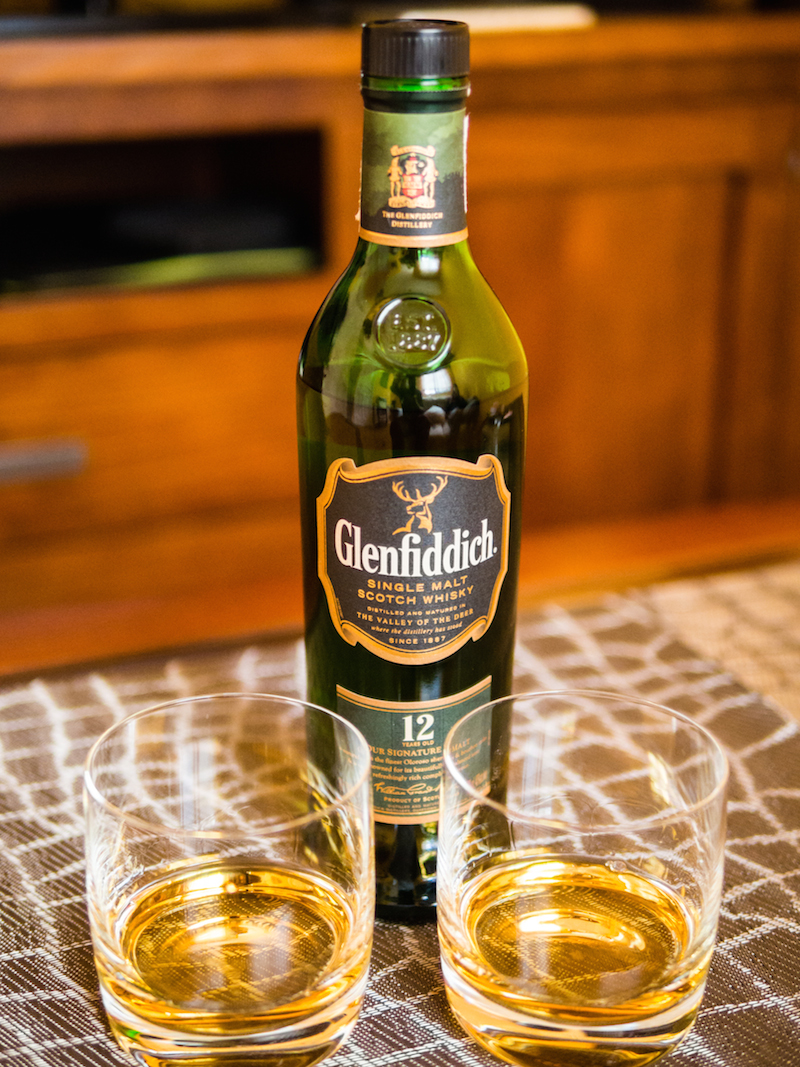 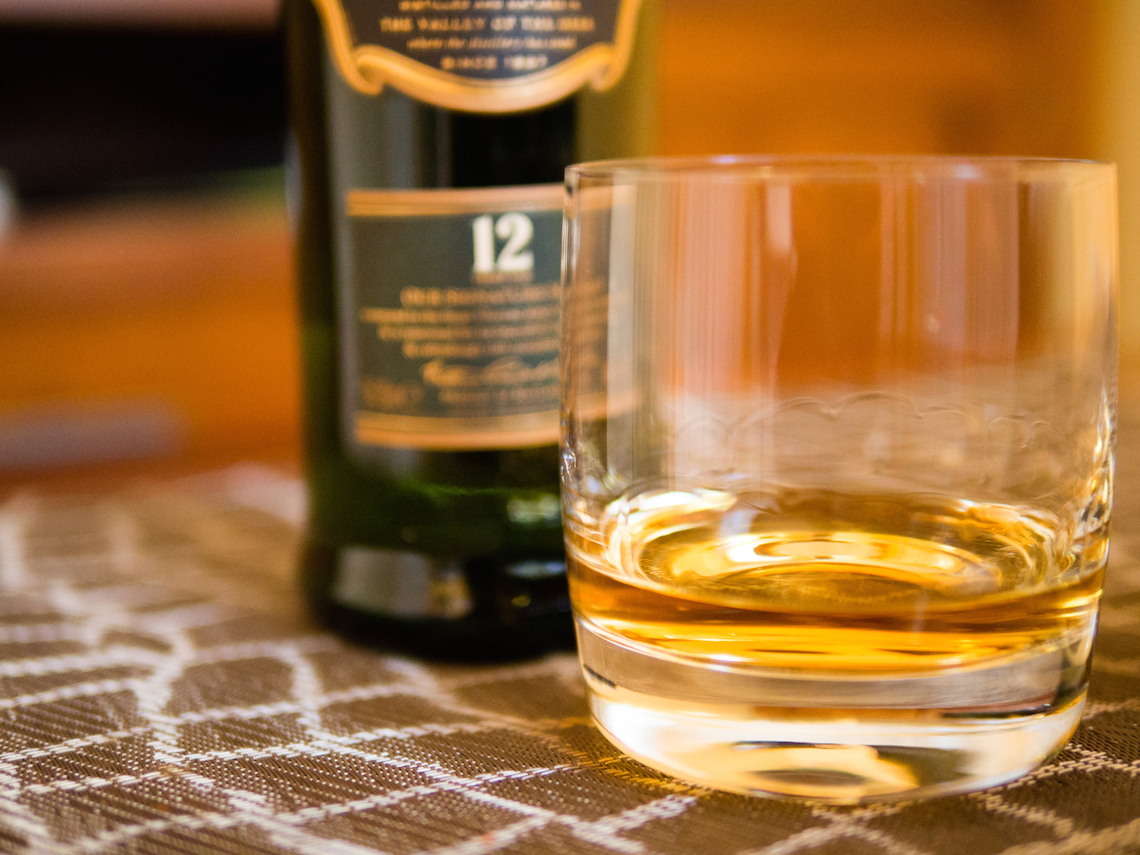 I would describe this whisky’s color as yellow, with golden tones shining through. On the official product website, it is described as “golden”. Using this color chart from Whisky Magazine, I would say that Glenfiddich 12 lies somewhere between 0.6 (old gold) and 0.8 (deep gold). Click on the image to view it full-size. 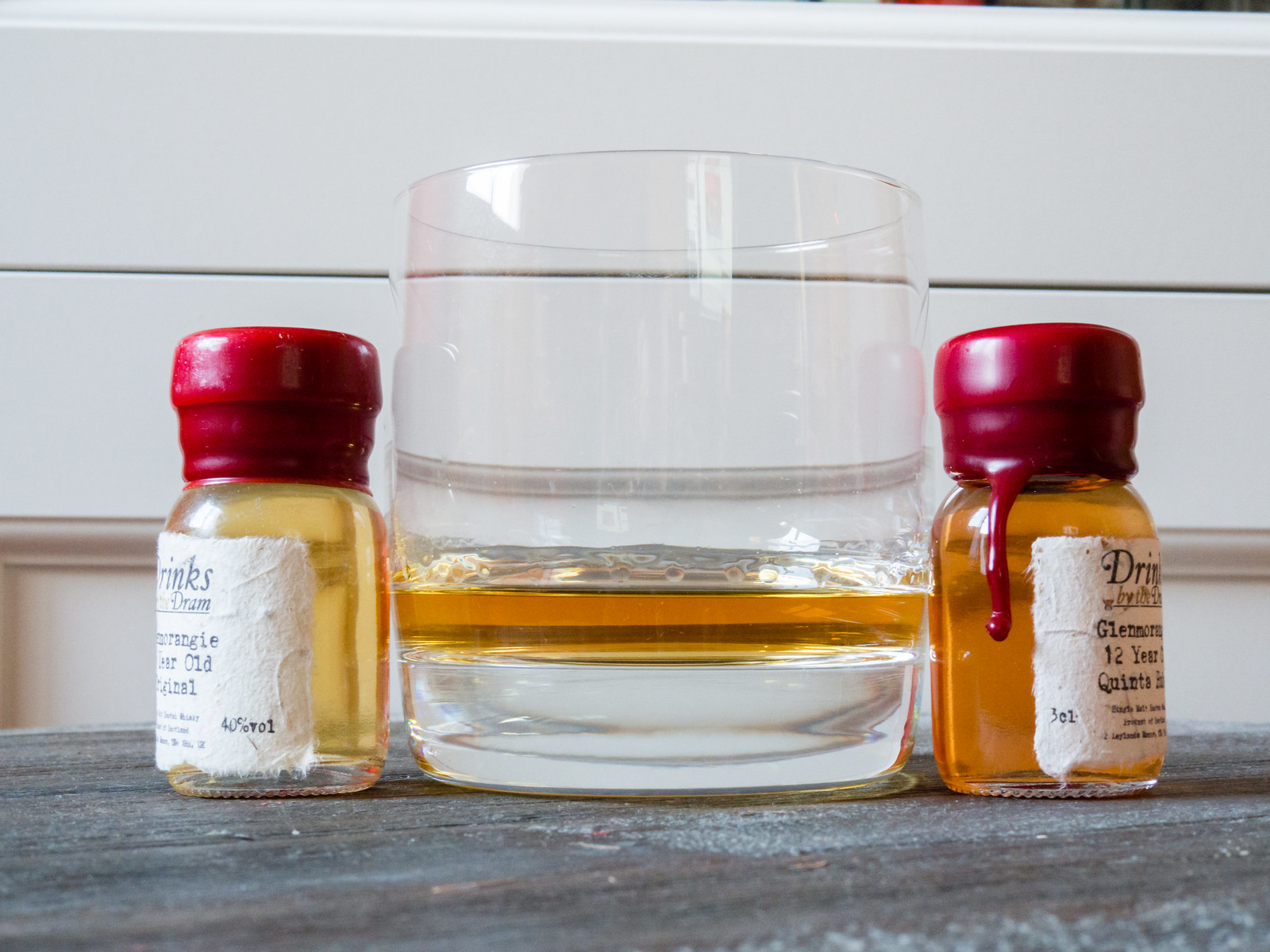 Under normal circumstances, there is much to be learned about a whisky from its color alone. The type of casks used, the length of maturation and many other interesting details all manage to show up in its final appearance. Unfortunately, many houses today use caramel coloring (E150) to tweak the color of their whisky, including Glenfiddich. As such, there’s not much more I can say about it without incurring in wild speculation.

There’s a fair amount of controversy in the industry about whether common practices like chill-filtering or coloring affect the final taste of the whisky in a meaningful way. Some blind tasting experiments suggest that they do not, but the matter is far from settled.

For a company like Glenfiddich, that ships millions of bottles a year, these are necessary evils to guarantee the consistency of their brand. From that perspective, smaller distilleries can afford to be more respectful of the traditional process, with small variations across different bottlings serving as proof of their uniqueness. These smaller houses have found great success within the purist community, and are becoming more entrenched in their ways as they find a viable business. At the end of the day, though, these are different markets and it’s normal to have different companies using different approaches to market their products. 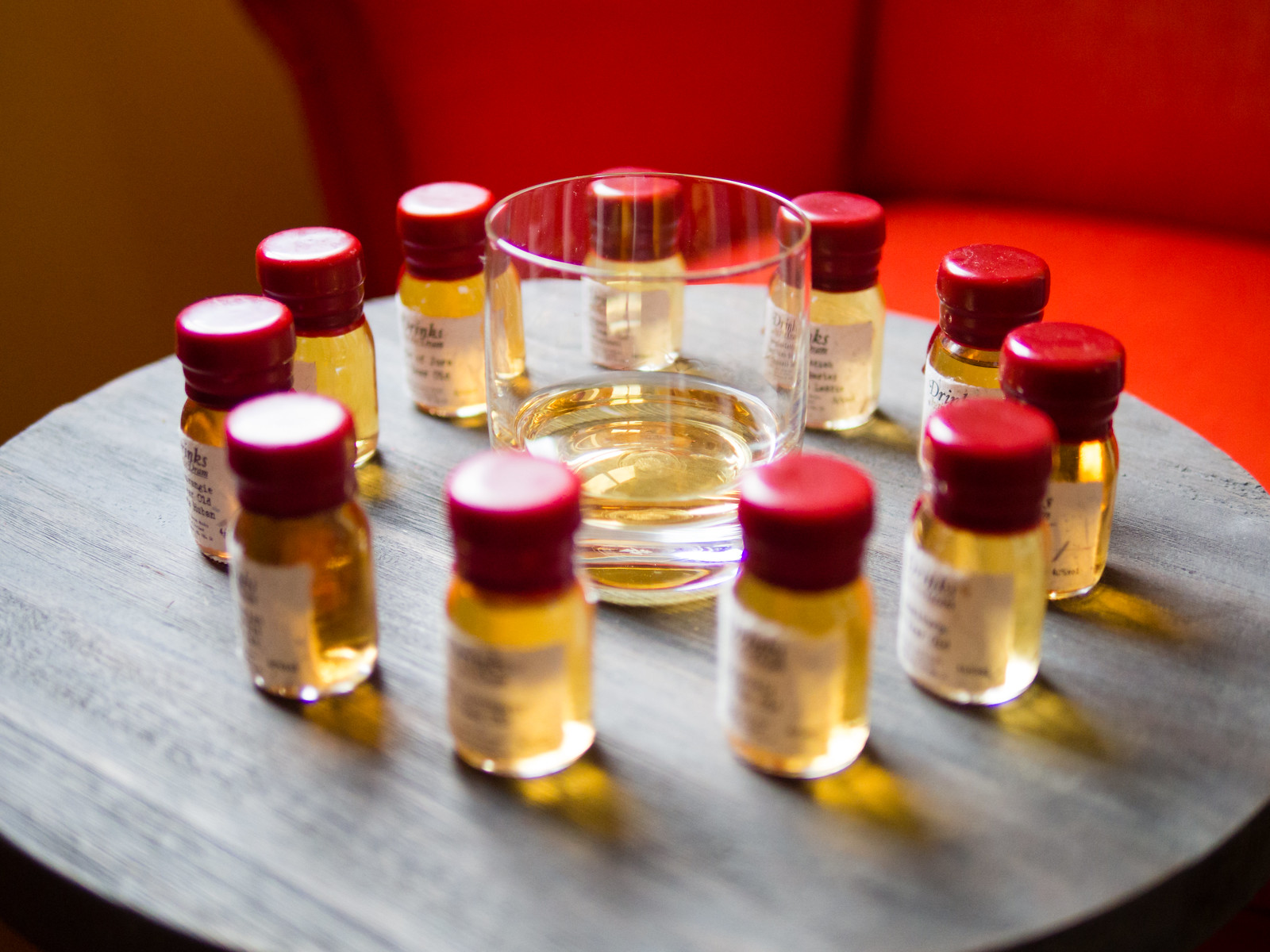 According to All Things Whisky, the nose of the Glenfiddich 12 can be described as gentle:

You can safely stick your beak right into the glass without eyes watering, and pull in a deep breath. The rewards are sweet fruit and light spice. Apple and chunky pear. Perhaps vanilla. Something refreshing there as well.

I most certainly agree. It’s easy on the nose, not nearly as overpowering as other whiskies I’ve tried. Though I’m not picking up nearly as many details, the pear is quite evident, and I can also identify some vanilla undertones. However, this is not a whisky that grabs your attention and doesn’t let go. Quite the contrary, in fact. While it doesn’t send you on a trip down memory lane, it is perfectly pleasant. I would characterize it as well-rounded, and balanced. Adding a few drops of water opens it up quite a bit and makes it much more enjoyable, in my opinion.

The simplicity of development is the biggest charm here, I believe. Arrival is sweet and fruity. A little bit of spice and creamy vanilla. A little woody. This isn’t one that unravels slowly and allows you to pull strands of flavor out individually, instead it is a nicely layered whisky that gives it all to you at once. I have read of others picking out hints of peat and nut, but…not really seeing it. The finish is pleasantly long, and the aftertaste mild.

This is a straightforward drink that doesn’t play games. While it does get easier on my tongue towards the bottom of the glass, its taste doesn’t evolve beyond that initial impression at any point. Perhaps that’s why it didn’t really sweep me off my feet, despite having been drinking it for the better part of a week.

I’ll give them this, though: its consistency is remarkable. I’ve tried several different bottles; I’ve tried it early in the evening, late at night and even one morning that I was feeling particularly brave, and it was always exactly the same. In a way, Glenfiddich 12 is like that old friend we all have: you may not have seen him in a long time but when you do, all it takes is five minutes with him to send you right back.

I could see myself coming back to this whisky every now and then, whenever I feel nostalgic and want a familiar taste. That’s well within my character, and I imagine I’m not alone.

I would say it’s medium, or medium-long. It stays with you effortlessly between sips, just long enough for a relaxed drinking session. It will not linger on for hours after you’re done, though. 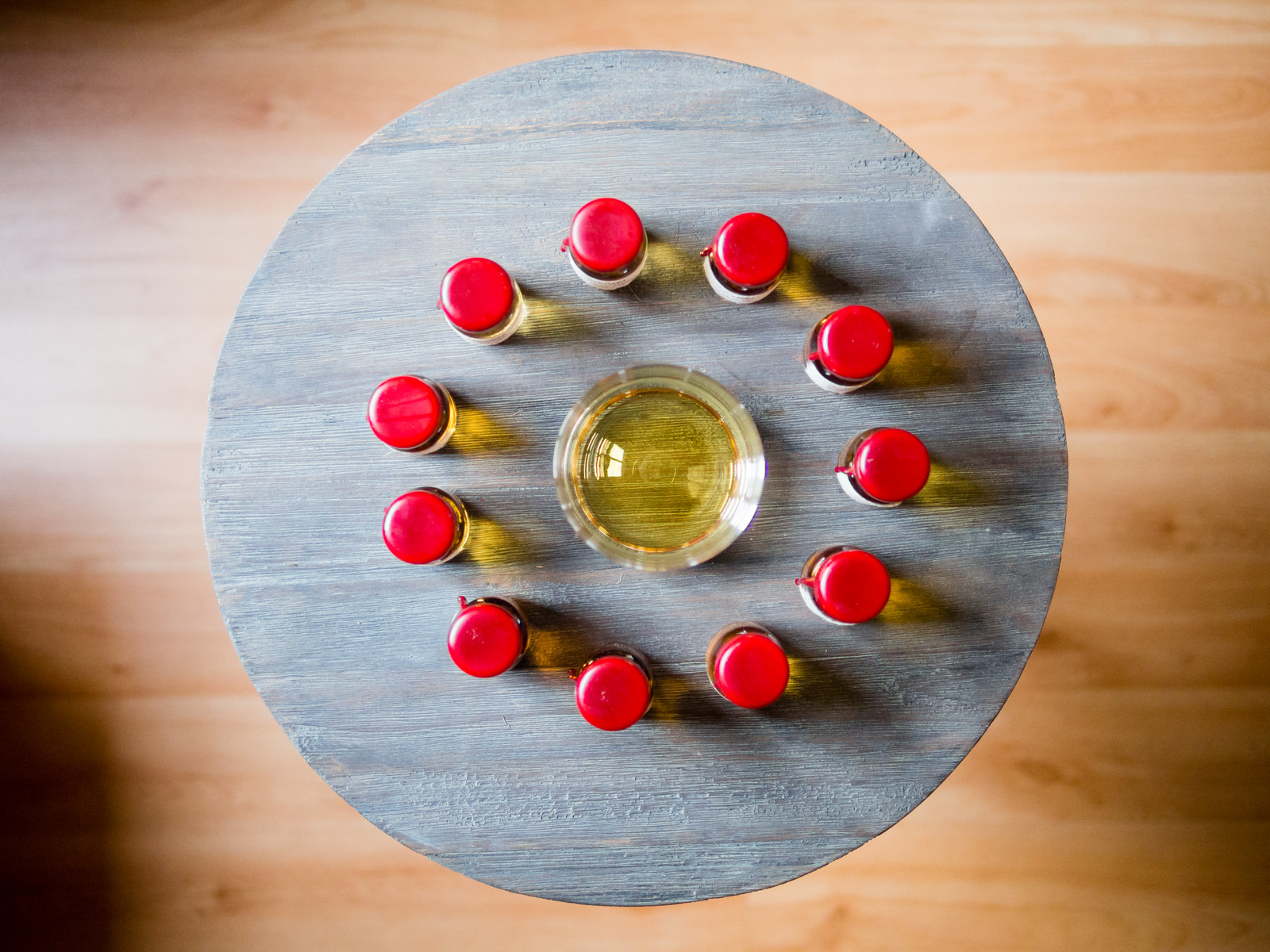 Any and all situations where the drink is not the focus of your attention. If you’re watching an episode of Mad Men after a long day, pour yourself a glass and sit closer to the TV. If you’re having drinks with your friends, this is something that won’t distract you from an interesting conversation, but also won’t diminish your enjoyment of it in any way.

There’s another situation where this whisky excels. Glenfiddich 12 is almost the perfect drink to order when you’re on a trip far away from home:1 it never fails, and if they only stock one single malt at a bar, chances are it’s going to be this one. Think of it as a landmark that can give you a sense of firm ground when you’re surrounded by the unknown. An anchor. I know I’ve needed that sometimes. 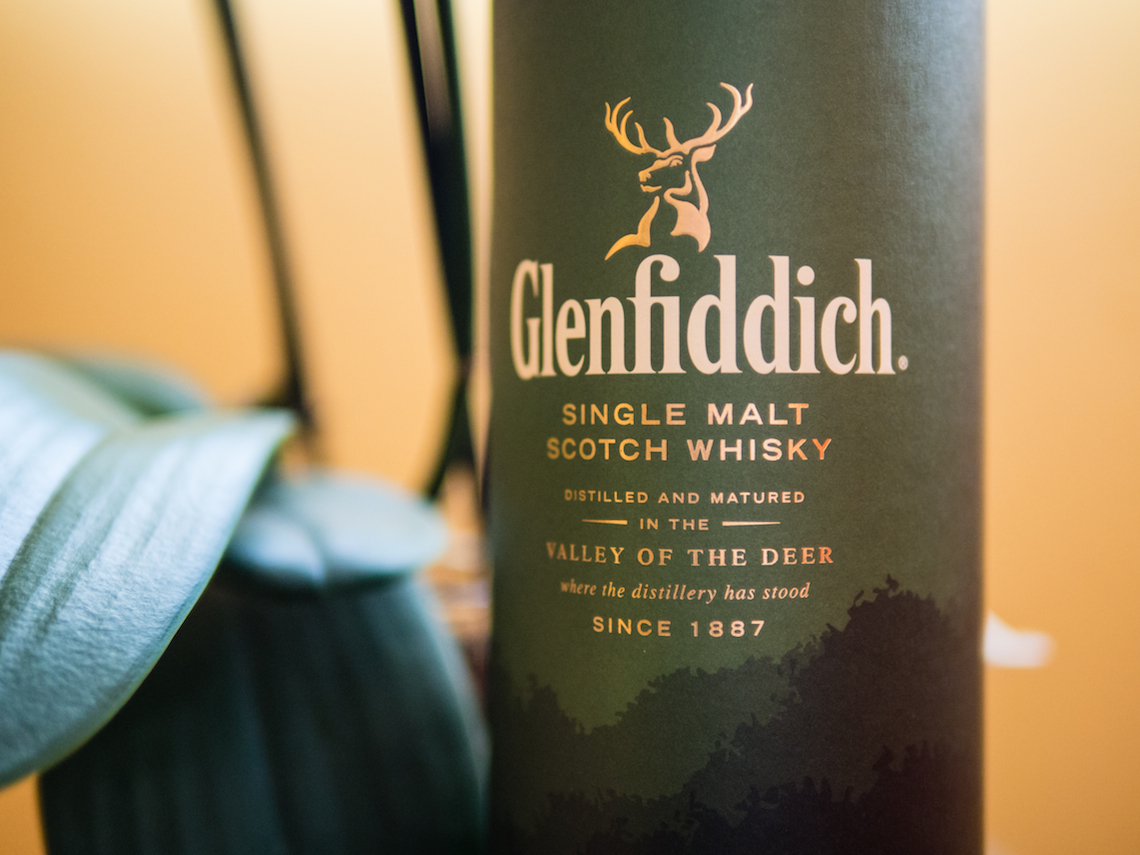 This impressive consistency is why I’m considering using the Glenfiddich 12 as a sort of benchmarking tool: whenever I have doubts about a certain whisky, I will go back to this one — or one of its older brothers — and reassess my perception of the two.

I have a pretty long journey ahead of me, but something tells me that as a stepping stone, Glenfiddich 12 was probably the perfect choice. Beyond that though, I’ll be honest: I suspect this is not a dram I’ll be excitedly drinking ten years from now. It’s perfectly good, just not terribly interesting. And I’ve always been a fan of interesting characters.