Over the weekend, Kevin Wammer posted a great inspirational video based on a famous series of comments made by American radio and television presenter Ira Glass a few years ago. The video is very reminiscent of Apple’s own “Designed by Apple” video and though I liked it a lot, I prefer this one where you can see Ira Glass himself, making the same observations in their original context.

It’s hard to argue with the message being conveyed here by Mr. Glass, and I definitely recommend watching the entire session (it’s a 4-part video) for even more context on the whole thing.

The gist of it though, is that beginners in any creative discipline usually lack the ability to produce great output, but not the taste to recognize it. This is a great point and I’d like to elaborate on it a bit more using my own creative struggles as an example.

It’s true that people who do creative work usually have great taste, and that can lead them to be too hard on themselves. When all we see are our own shortcomings it’s pretty difficult to get anything done, and that’s a recipe for disaster. In those cases, as Mr. Glass so deftly put it, the only way to close the gap between our creative ambition and our current skill is to do a lot of work and just push through that stage.

However, our taste also evolves as we grow, shifting our perspective and inching the finish line ever so slightly farther away from our reach. How then, can we ever feel creatively satisfied with our own work?

It’s all about putting things in perspective.

Whenever I look back on my own work, I invariably get a sense of profound discontent, quickly followed by a splash of shame and a stern conversation with myself along the lines of “wait a second, how in the world did I publish this terrible piece? What the hell was I thinking?” If you do creative work of any kind, this will be a very familiar conversation.

In that moment it’s easy to be discouraged from ever publishing anything again, but the key thing to remember is that this is a good thing, a sign of healthy progress. We should always feel embarrassed of our previous work, because it means we’ve moved on since then. It means we’re capable of greater things now. Looking back, we should get a very clear sense of improvement which ought to be a source of encouragement, not shame.

John Siracusa made a very similar observation during episode 95 of ATP (about one hour and 14 minutes in), when they were talking about Casey Liss removing Fast Text from the App Store because he didn’t want people to associate his name with something he isn’t proud of anymore:

Exactly. Programming is very much a creative field, after all, and the same rules apply just as well.

Another such field is photography. It’s been an area of intense interest to me over the past few months, and a good chunk of my personal time every day is invested in trying to learn new things. Every time I go out with a camera, I try to experiment and force myself out of my comfort zone. I keep questioning what I think I already know and trying to find different ways to do things. It’s fascinating, and also a ton of fun.

Lately I’ve been really getting into film photography, and the other day I published the first part of what I hope will be a long series of articles called Adventures in Film Photography. Now, I’m reasonably happy with how the article and the pictures turned out, but I can definitely see there’s room for improvement. All those pictures will probably look like crap to me in just a few months, but that’s ok. I’m giving myself permission to suck here because it’s the only way I’m ever going to learn.1 And I’m forcing myself to publish my efforts because it’s a great way to keep me honest and reliably measure my progress.

To further prove my point, yesterday I scanned another roll of Kodak Tri-X film and among other things, this came out: 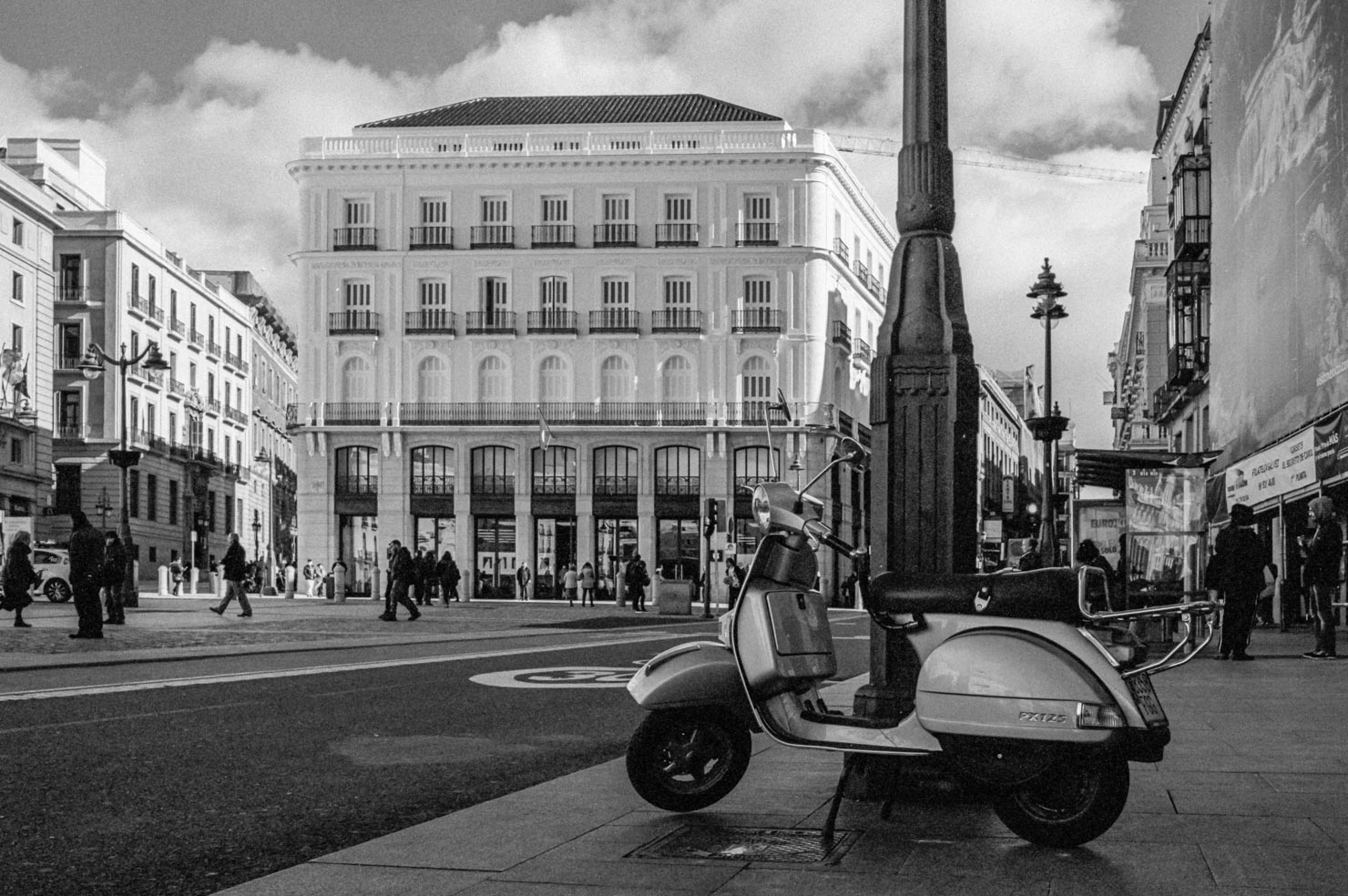 It’s a seemingly simple, almost mundane image of a Vespa motorcycle in Sol Square, Madrid. In the background you can see the brand-new Sol Apple Store, and that’s pretty much it.

It may not be much, but for some reason I really like that picture. A couple months ago I never would have though I could take an image like this with an all-mechanical film camera, but here it is. Sadly, when I look back on it six months from now I’ll probably think it looks terrible and I will regret publishing these words but so what? They’re true today and it’s important I acknowledge that.

I know I’m not a good photographer yet, but I hope to be one some day, and this is how I’ll get there. That’s why the picture is going to stay on this website: to remind me where I’m coming from, and to get me where I want to go.

Still, even though deep down I know all of this, it’s sometimes easy to miss the positive aspect and get stuck in a never-ending cycle of self-doubt. That’s when community becomes important.

Give it to me straight

Creative people rarely thrive in isolation, because our sense of taste is nurtured by our continued exposure to other people’s work. It is through them that we get inspired to do better, and we often rely on them to keep us honest about the work we do. Truly great creative work can’t be done in a vacuum.

As you’ve seen, I routinely post some of my pictures here, often accompanying articles that have little to do with photography themselves. Some other times though, photography is deeply embedded in the fabric of the article as well, which is when everything needs to work together seamlessly.

One such article was “Building a lightweight photography kit for the urban professional”, and it was one of the first serious articles I published after I started working full-time on Analog Senses. I put quite a bit of effort into it, and I distinctly remember feeling proud of it, even going as far as to cold-email Ben Brooks about it. Ben is, in my book, the one person to go to for 100% honest, no-bullshit feedback and I was genuinely curious — and downright terrified — to see what he thought about it.

It turned out, Ben liked the article enough to link to it on The Brooks Review, which was a massive confidence boost for me at a time when I really needed it. Of course, looking back at that same article now, I’m definitely happy I published it and still think it has merit, but there are also a million things I would do differently.

For example, I now cringe a little bit when I look at some of the photos. The framing, the colors, the post-processing… Everything seems slightly off, as if it wasn’t really me who took them. I suppose that’s great, because it means I’ve grown as a photographer since then. I certainly have no intention of going back to “fix it”, as I believe in letting my work be true to itself and more importantly, be a reflection of who I was at the time. Plus, if I had to fix everything I don’t like about my past work I would never get anything done. 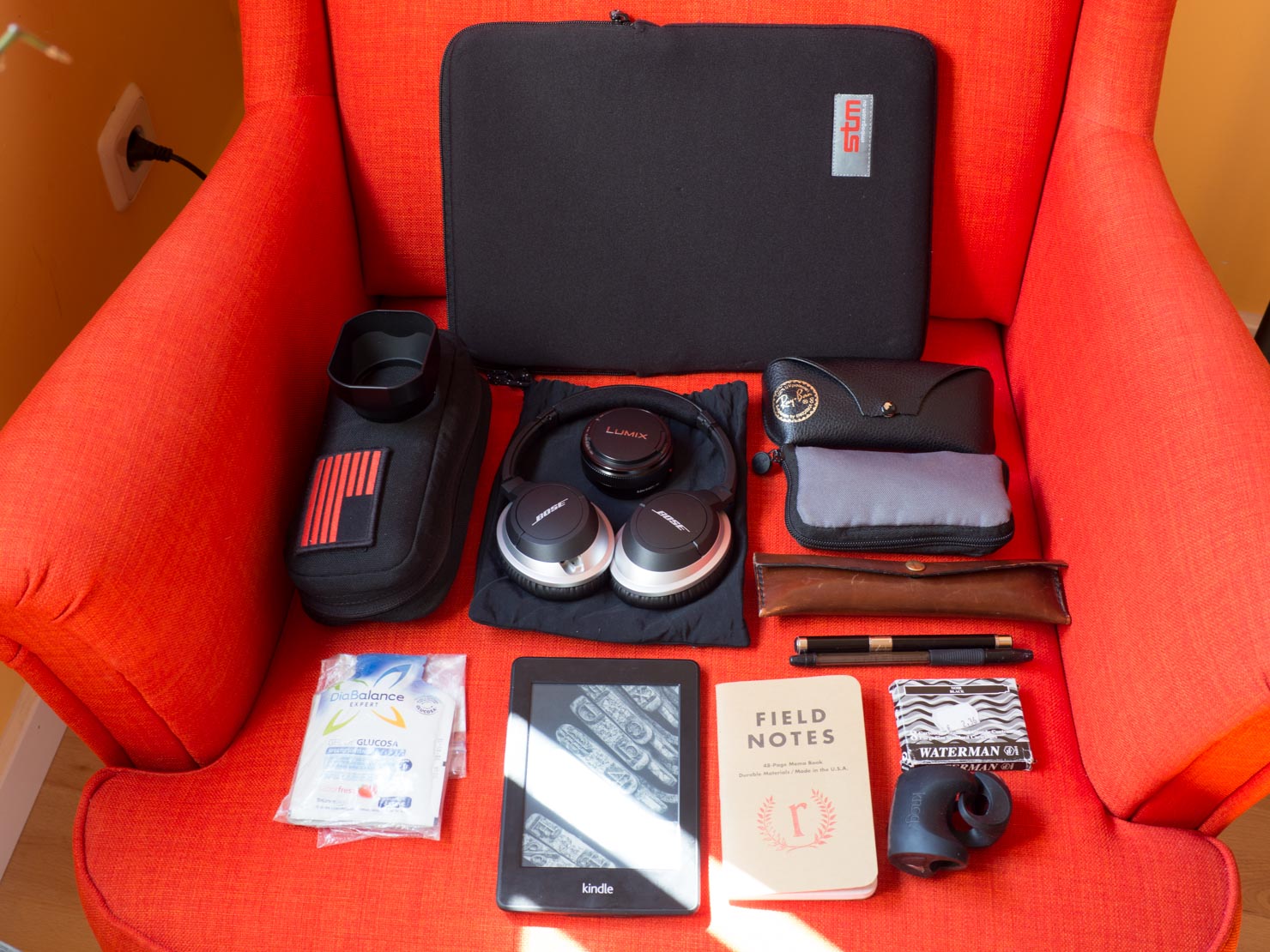 I don’t know what I like better, if the cord plugged into the wall socket, the fact that the chair is not straight, the overly saturated red color of the chair which looks nothing like real life (it’s actually orange), or the sunlight entering through the window to add absolutely nothing to the overall picture.

I’m well aware of my own shortcomings, both current and past, which is why I sometimes don’t handle praise very well. Similarly, it’s sometimes hard for me to handle criticism and I tend to get defensive about things, even if I don’t always say it out loud. Both of these are boneheaded moves that actually hurt my growth as a creative person instead of helping it. They come from a place of insecurity and they’re debilitating character traits that I’m always trying to overcome.

The reality is, we could all use some more honesty on the Internet, even if it means getting our feelings hurt every now and then. It’s only through honest, constructive feedback that we get to improve upon our efforts and eventually, close the gap between our creative ambition and our creative output. Likewise, it’s only through community feedback that we get to experience the delight that comes with putting something of value out there, and we need to learn to simply enjoy those moments without second-guessing everything.

There’s no question every creative discipline presents a learning curve. Whenever we set out to do something new, there’s a fairly high probability we’re not going to be able to just wing it and suddenly become masters in our field of choice. Chances are, our first published article won’t earn us a Pulizter prize, and our first Flickr upload won’t be featured on the cover of National Geographic. In the beginning, our work is way more likely to suck than to be awesome, and there’s nothing wrong with that.

There’s also no question we all have the potential to get better at any given skill through tenacity and practice. It’s sometimes easy to attribute our current inability to produce great creative output to a lack of talent or capacity on our part, but that’s usually not the case at all. We see our work with its million imperfections and we mistakenly assume that’s the best we can do so what’s the point in even trying. This is an absolutely toxic way of looking at things, and it will lead to failure every time.

Finally, it’s true that our sense of taste is often our own worst enemy. The more insightful and discerning we are, the more unforgiving our taste is towards our own work. We really are our own worst critics. However, no matter how great or how awful our current and past efforts may seem to us, the truth is we’re probably only at the beginning of the learning curve, and we still have miles to go before hitting our talent ceiling.

Actually, I don’t even believe in such a thing as a talent ceiling. Creative disciplines are ever-changing, and the day we stop trying to get better at something is the day the ceiling is set for us, with only ourselves to blame.

The creative life is a constant quest for improvement, and if we persevere, the quest can last a lifetime. We simply need to give ourselves permission to suck along the way.