Today I read Shawn Blanc’s excellent 4,000-word review of the Retina iMac. Shawn is coming from a MacBook Air, so he’s moving from a laptop + external display rig to a desktop-only setup:

And here at my desk, it’s more than just the computer that I have going on. I use a standing desk, a clicky keyboard, and gigabit internet. There are many incentives (comforts, really) that make my home office workstation comfortable, efficient, and preferable. Honestly, I like it here.

And so I decided that I was willing to double down on my home-office setup and that my next main Mac would become a desktop machine if it meant I could get a Retina display.

Welp, that’s exactly what happened. Apple announced the new iMac with its Retina 5K Display, and I ordered one right away.

This is sound logic. If you’re spending most of your time at your desk, the Retina iMac is a no-brainer. Like Shawn, I like to use my computers for as long as I can before replacing them; I definitely recommend getting the best specs you can afford now in order to make your life easier in the future.

Unlike Shawn, however, I use an iMac + MacBook Pro setup and frankly, as much as I love my iMac and as much as I’m lusting after the Retina iMac, I just can’t see myself giving up the MacBook Pro to go desktop-only. The problem is, my iMac is already 6 and a half years old and my MacBook Pro is 4 and a half years old. Yikes. Even though both are still performing admirably for their age, it’s been long enough that upgrading either of them would clearly make a huge difference.

Having a laptop is a necessity for me, because I do most of my work away from my home office. Changing places every now and then helps me stay fresh and motivated, and I vastly prefer it to being chained to my desk at home all the time. I’m actually typing these words on my MacBook Pro while sitting in La Bicicleta Café, a Cycling Café and Workplace that I frequently use as a remote office. As a bicycle nut, this is pretty much the perfect place for me to work at. 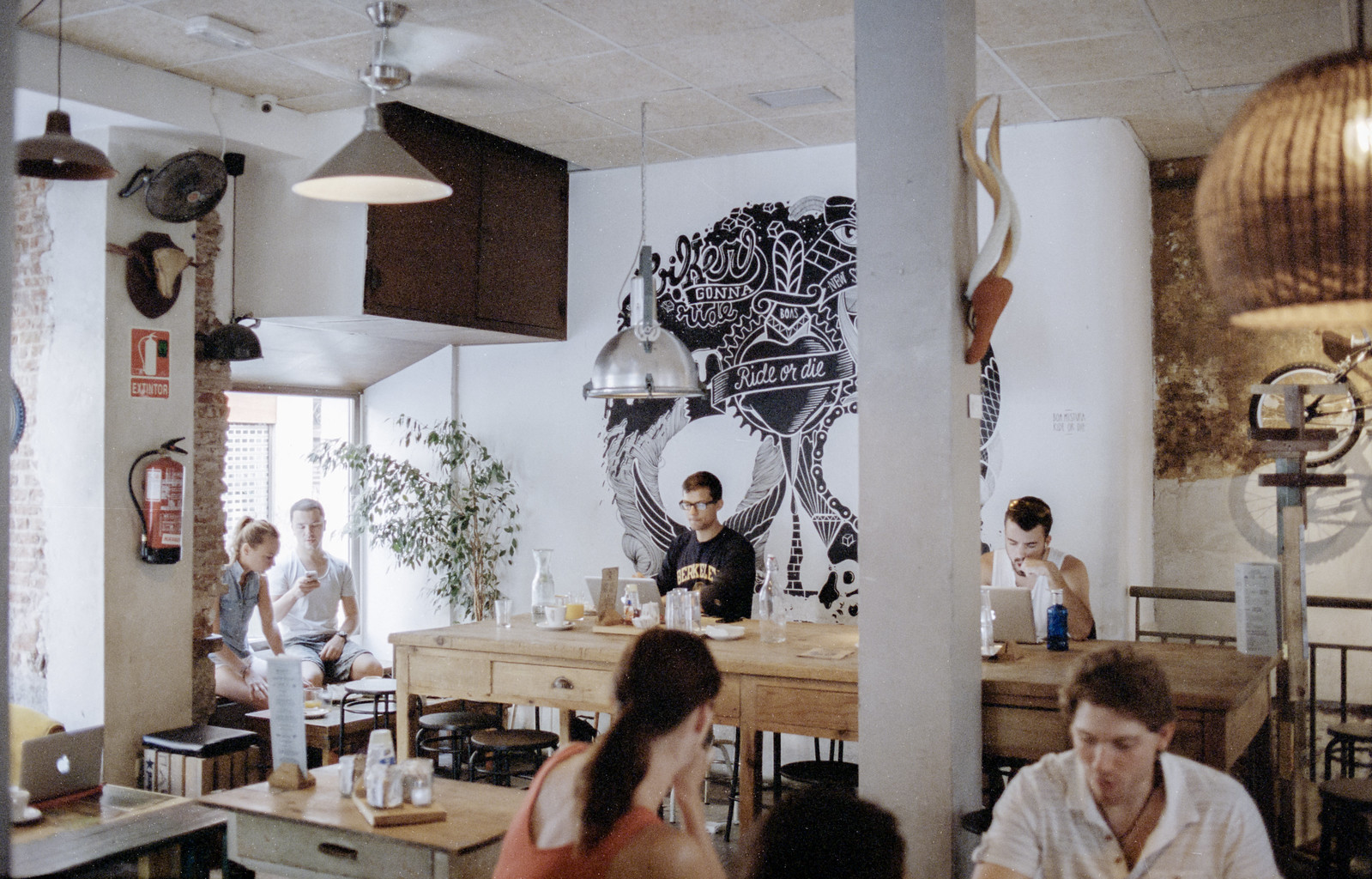 An additional consideration is that in order to fund the upgrade I must first sell part of my current setup, which means at least one of the two computers I own has to go. If going desktop-only is not an option, then what is the right way for me to go Retina? Because let’s face it, I won’t be buying a non-retina Mac ever again. I’d much rather wait until I can afford to upgrade properly, even if it takes another year.

With that in mind, I can see four distinct upgrade paths:

The first option would be the ideal, of course. Unfortunately, I’m not swimming in cash just yet so I can’t really afford it.

Realistically, the most sensible upgrade path would be the second one. Being the one I use the most, I think I’d rather have Retina on my laptop first, and thanks to the SSD upgrade, I could live with my aging iMac for a while longer. Then, at some point in the future, I would finally upgrade my desktop and get the Retina iMac, with the added benefit of possibly getting a second-generation model. This would ensure Apple has had enough time to iron out any kinks or bugs that may affect the first-gen Retina iMac. There don’t appear to be any significant ones for now, but we’re still in the early days, so you never know.

A more aggressive upgrade path, however, would be to sell both computers and just get the top-of-the-line 15-inch Retina MacBook Pro plus an external display. Effectively, this would be the opposite of what Shawn just did. If Apple could make an external 5K Retina Display, I would do this without hesitation. Unfortunately, since that’s not the case — and won’t be for a while — I remain undecided. I currently use my iMac as a media hub for my Apple TV, and if I were to switch to a laptop-only setup, having all my external hard drives permanently connected to the display via Thunderbolt would be a great feature. That way, there would only be one cable to unplug every time I wanted to switch from desktop to laptop mode. Using a non-Apple display would eliminate this very convenient feature, which sucks.

What I’ll probably end up doing, however, is the final option. I would love to get a Retina Mac, but if I’m being completely honest with myself, now is not exactly a good time to upgrade. It’s easy enough to justify the expense because the benefits are many — and profound — but at the end of the day, the truth is both my current Macs are still perfectly capable of fulfilling my needs, and there are several other, more important things I need to figure out in my life first.

The point I’m trying to make is that there’s not a universally-agreed-upon best way to go Retina on the Mac. It all depends on your particular situation and preferences and, as cool and impressive as the Retina iMac is, it’s perfectly OK to realize that it may not be the best choice for your needs. These machines are amazing, but they’re also pretty expensive; you should probably take the time to carefully evaluate your options before deciding which one is best for you, even if that means doing nothing at all — which, ironically, is the most difficult thing to do.

It’s not purely about the money, mind you. Even if you can easily afford to upgrade, does it really make sense? Is it a reasonable purchase or just a spur-of-the-moment bout of desire? Will you get the most of what the new thing has to offer or will those features be largely wasted on you? Ultimately, is it for you? These are meaningful questions.

I honestly believe being responsible consumers is important. There’s just too much senseless buying going on around us all the time; at some point we have to start taking responsibility as individuals, and start making sensible choices in our lives. Every decision has a hidden cost. Sometimes that affects us — the same dollar can’t be spent twice — and sometimes it affects others. This shouldn’t be simply shrugged off without consideration. Upgrading just for the sake of fancy is often tempting, just not particularly smart or advisable.

That said, I also believe in investing in quality items and tools, and in their potential to enrich our lives. If you genuinely need a Retina iMac, by all means go for it, get the very best model you can afford and use it thoroughly and responsibly for as long as you can. It will surely prove to be one of the smartest buying decisions of your life.