A couple months ago I started noticing some weird floating things in the corner of my left eye. I became somewhat concerned, especially because once I noticed them, it became really difficult to stop noticing them all the time. I even started to obsessively check my corner vision every few minutes to see if they were still there and whether they changed position/size. As you can imagine, believing there may be something wrong with your eyes is not a particularly fun experience.

Luckily, today Laughing Squid pointed me towards this excellent TED-Ed animation, in which the nature of such phenomena is explained. It turns out, these things are commonly known as “floaters”, and they’re usually safe. They’re caused by tiny particles floating in the liquid vitreous humor inside the eye and casting shadows on the retina.

So, while in some extreme cases floaters may be the result of a more serious condition, their presence in small quantities is a very common occurrence and is usually no cause for concern. That said, if you’re experiencing similar symptoms and are still unsure as to what it could be, the best course of action is always to check with your doctor.

Update (01/07/2017): Check out this comprehensive guide to floaters at Laser Eye Surgery Hub for more information.

Ok, this is admittedly silly, but it’s just too funny to not link it.

The three-bladed lightsaber that appears in the teaser trailer for ‘Star Wars Episode VII: The Force Awakens’ has proven to be an incredibly controversial topic on Twitter, with people arguing ad nauseam over the feasibility of such an exotic design.

Thankfully, the other day Stephen Colbert took it upon himself to settle the discussion once and for all:

[The little beams] don’t start where the little metal hilt ends, OK? They’re attached to the other beam inside. The metal hilts are just casings around the little beams to protect your hand. Even if someone slices through the metal they’re gonna hit the beam right there. Any Padawan knows that! That’s science!

UPDATE: Unfortunately, the YouTube video that was embedded in the original version of this post has since been removed due to a copyright claim. Follow the title link to watch it on Comedy Central’s official website (Flash-based, alas).

I’m currently working on a new time lapse project. Not a sort-of-time-lapse. But a true one. To put it short: I’ve had an SLR camera in my window at the same spot for one year. Snapping an image every half hour. Resulting in some pretty nice time lapse videos I’ll post here in a couple of days. But first a still image. 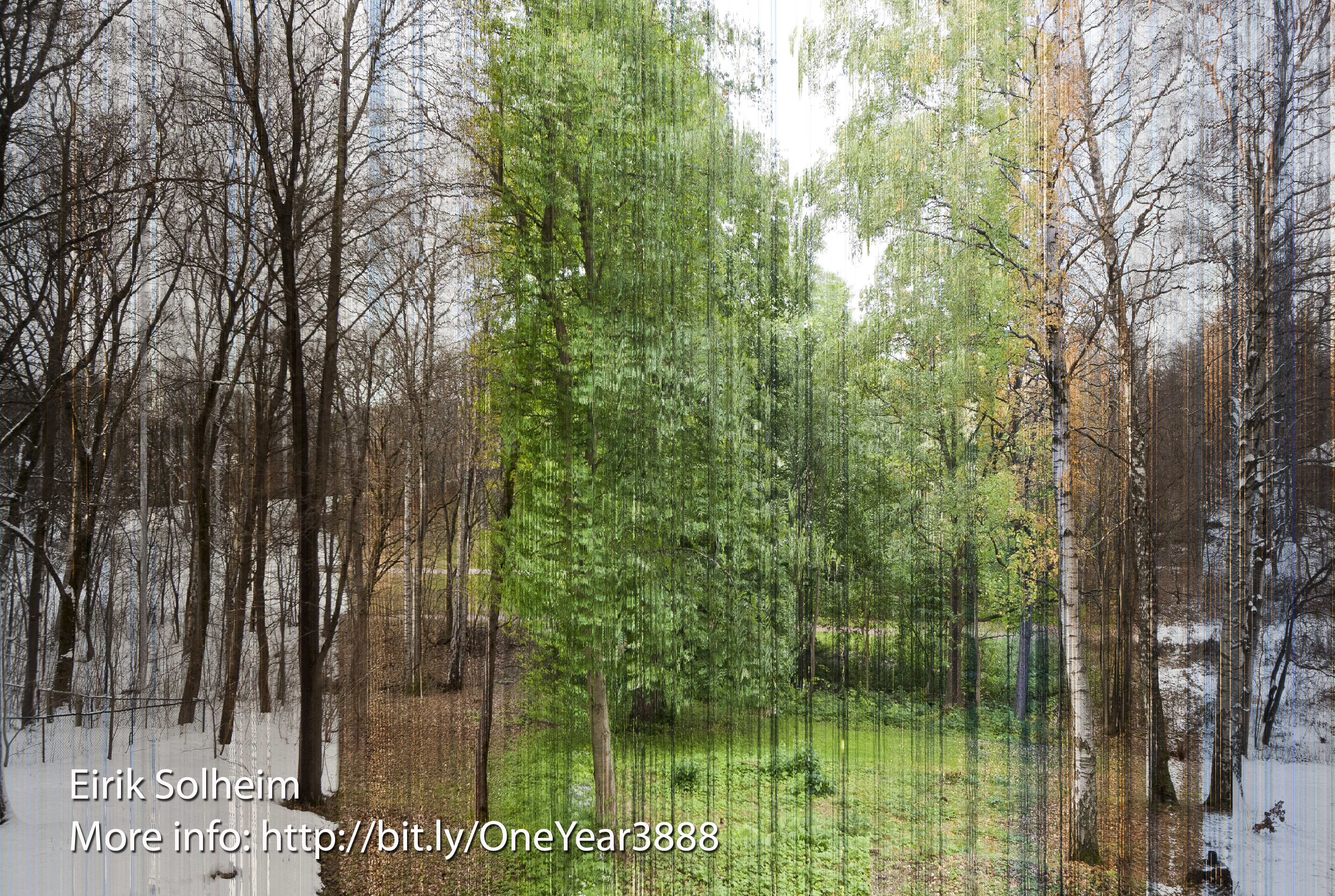 It shows one whole year. January at the left and December to the right. You can clearly see that we have a pretty long winter and a decent summer here in Oslo, Norway.

This is easily one of the most amazing images I’ve ever seen.

Next fall, BitTorrent will distribute its first original Web series, Children of the Machine. The series is helmed by Marco Weber (producer of Igby Goes Down and The Thirteenth Floor) and takes place in the year 2031, in a futuristic society where androids take over and force humans to band together to survive. And, if you’re interested, the only place to get it is to download it via a BitTorrent Bundle, a service that allows artists to release content directly to consumers.

“This is a science fiction show catered to the typical tech-savvy, male-dominated audience,” Weber said. “We’re not trying to launch a romantic comedy, so the concept of this show moved us toward BitTorrent.”

The pilot and an ad-supported version of Children of the Machine will be made available for free download, but those who want to skip ads can pay $4.95 for the eight-episode season or $9.95 for bonus content.

Good luck with that.

Freedom of speech is not, and has never been the same as freedom to be heard. Censorship is an organized effort of a governing body to silence something they don’t like, and it can be done by a government or a corporation alike. Individuals choosing who they do not wish to hear, and collaboratively tuning them out is within their rights by any legal framework. If Twitter, or any other service, were bound to force users to see replies from any Tom, Dick, or Harassing Harry on their service, it would be akin to Fox News having the legal right to pre-empt you watching CNN on your TV. (And that analogy works if you flip the networks around.)

If the XL1 was equipped with an 18 gallon fuel tank, and you did all highway driving, you could fill it up with an oil change and when the next change was due you could change the oil and keep driving without filling up for and additional 2,400 miles. But it comes with a much smaller fuel tank, because if it could go that long on a single tank chances are the fuel would foul before it got used. The tank is only 2.6 gallons to prevent fuel age related problems from happening. So fill ups are cheap.

That’s impressive. But why wouldn’t such an efficient car be allowed on American roads?

The answer is obvious. Simply for the sake of raking in huge profits from $4 a gallon gas, getting guzzled at 10X the rate it should be, the corporations have via campaign contributions and other types of pay outs succeeded in getting the FED to legislate the best cars off the road for irrelevant trumped up reasons. The XL1 will not meet American emission standards NOT because it is not clean enough, it will not meet them simply because inefficient parts that are mandated by the EPA are not part of the XL1′s power train.

UPDATE: Apparently, the conspiracy claims implied in this article may not be entirely reliable. Here’s the flip side of the story:

First of all, it’s not true that the XL1 has “been denied a tour of America because it is too efficient for the American public to be made widely aware of.” Existing safety and traffic regulations do limit where the current XL1 models can be legally driven in public roads in the U.S., but Volkswagen has taken at least three of the vehicles on tour around the U.S., and the staff of Jalopnik drove one around Manhattan at the end of 2013.

Second, the primary reason the XL1 won’t be seen in the U.S. anytime soon is that Volkswagen is only producing 200 units for retail sale (not 2,000 as claimed above), all of them to be sold in Europe via some sort of selection (i.e., lottery) process.

Frankly, I’m not entirely convinced of either version, but it’s only fair to present both sides of the argument. That said, a healthy dose of skepticism is always a good habit to maintain and as ever, it’s your duty as a reader to make up your mind in light of the facts.

Thanks to Mark Bylok for the heads up!

Whoa. This is so painstakingly detailed it makes my head hurt:

At this point, you might be thinking: “Wait – why are we talking about units of measurement? Why should I, Joe or Jane Blog-Reader, care about a typographic anomaly in the measurement units of a space-based computer?”

You really should know the answer to that by now. Typography is always important.

You just know this is going to end badly.

Allen Pike, on why such an app doesn’t exist yet, and is not likely to exist anytime soon:

The next step, the final step before going all in on building this, was for me to figure out how to make it sustainable in such a niche market. I just had to do the “napkin math” to show that if we built the app, we could maintain it at a level we could be proud of. This step has proved problematic.

Unfortunately, it looks like the potential audience for an advanced, high-quality podcast recording app is not large enough to make it sustainable to develop — and more importantly, to maintain.

This is just stunning. Craftsmanship at its very best.

Via Jason Kottke. Don’t forget to check out his post for an explanation of what makes Damascus steel so special.