The Classic Laddie is described by its maker as “the definitive Bruichladdich”.

Made from 100% Scottish barley, this single malt aims to become the whisky that is synonym with the Bruichladdich name. However, that’s no easy task. Out there in the real world, The Classic Laddie has some pretty big shoes to fill. 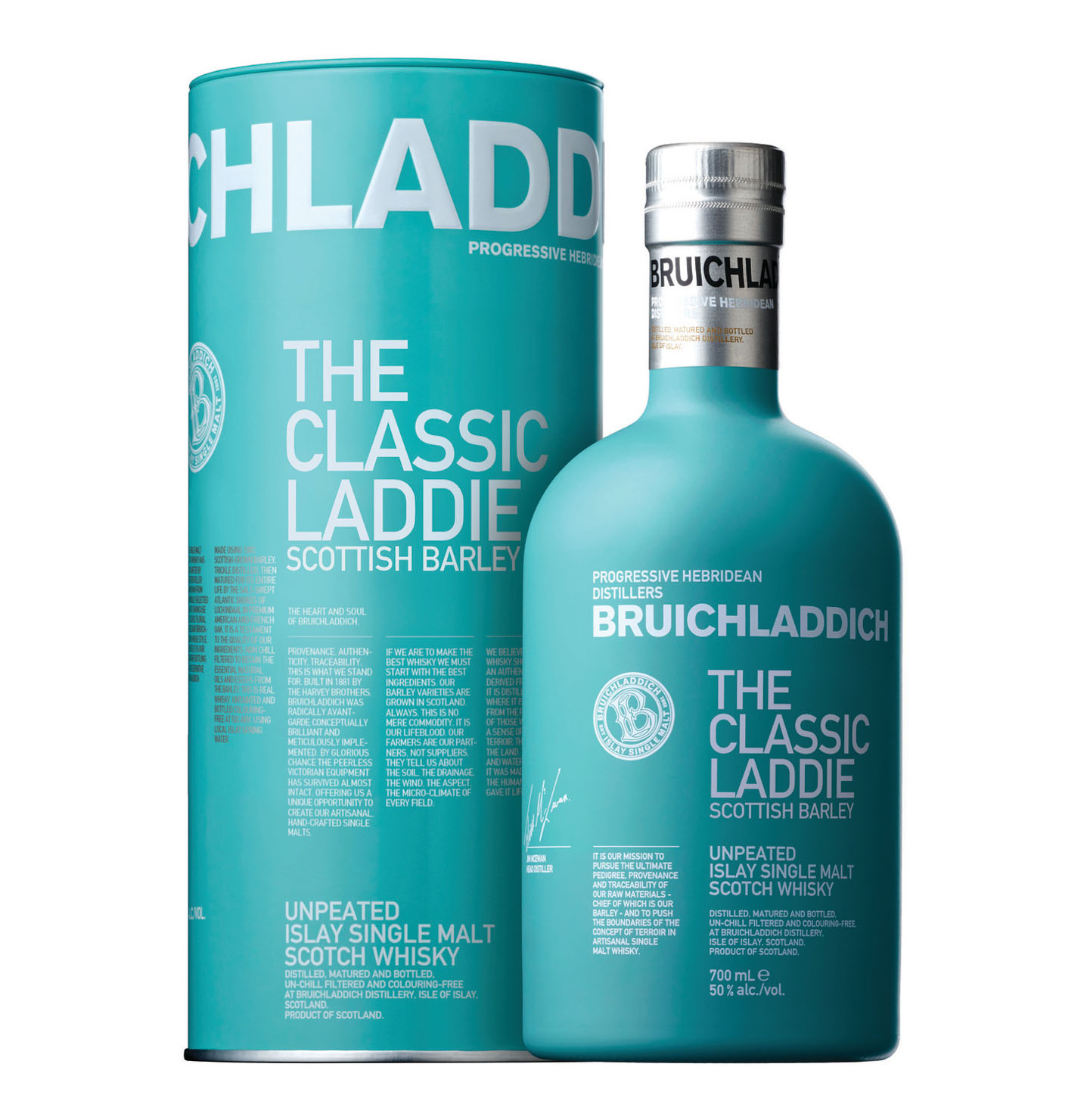 Back when I was planning my journey of discovery, Mark Bylok suggested to me that, out of the many different single malts out there, I could do a lot worse than starting out with a classic Bruichladdich.

If you have a good eye, you may have noticed there was no capital “C” in that last phrase. Indeed, the single malt Mark was referring to was an entirely different animal: The Laddie Ten.

If there’s one whisky you could blame for Bruichladdich’s current stellar reputation and healthy sales figures, it is undoubtedly The Laddie Ten. A vintage bottling from 2001, this exceptional whisky single handedly put Bruichladdich on the map for all the world to see, dramatically changing the ending of this Islay maker’s story.

Before The Laddie Ten came to be, the story of Bruichladdich was a sad one. Located on the Rinns of the isle of Islay, it was built in 1881 by the Harvey brothers, who managed it with great success until the death of William Harvey in 1936. In the following decades the distillery had several owners, but none of them were able to capitalize on its potential and in 1994, it was eventually shut down. 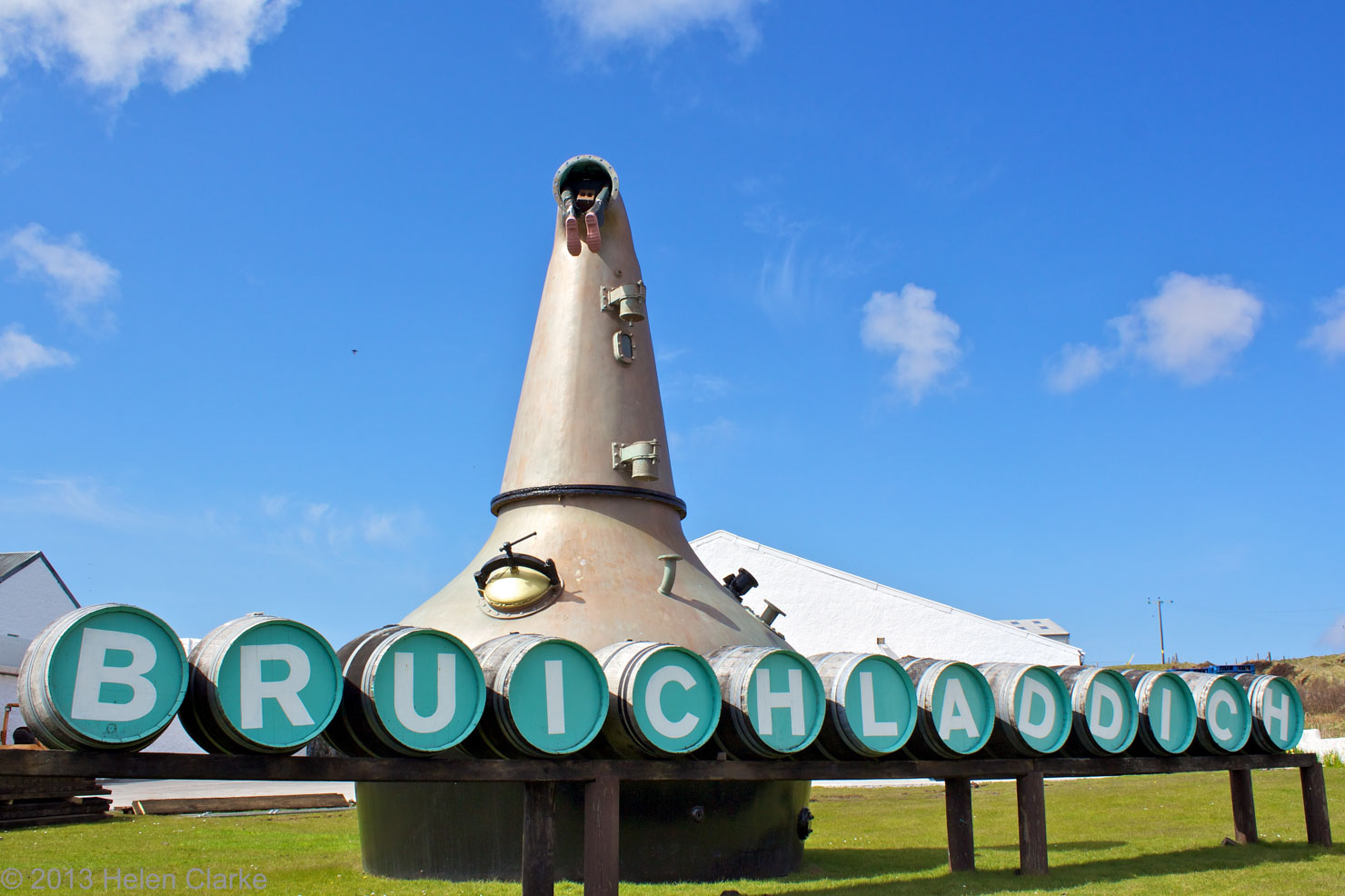 Fast forward to the year 2000, when the remains of the distillery were finally acquired by a group of investors led by Mark Reynier, the man who had been trying to purchase it for ten years. They also hired Jim McEwan as master distiller and production director. In the following couple of years, Reynier and McEwan personally oversaw the dismantling and reassembly of the entire distillery, putting special care towards preserving the original machinery used by the Harvey brothers. This machinery is still in place and being actively used today.

Unlike other modern distilleries, Bruichladdich places great importance on doing things the traditional way and as such, their entire production process is managed and controlled by hand with no use of computers. However, that care for tradition hasn’t stopped them from experimenting and in fact, they have become one of the most prolific whisky makers in recent years, releasing many different limited editions and variations of their extremely solid core range.

Today, Bruichladdich is a unique distillery in that, despite being an Islay maker, their core range features several unpeated single malts, including The Classic Laddie. Of course, they also produce a range of heavily peated and super-heavily peated whiskies, labeled Port Charlotte and Octomore respectively.

In 2012, the Bruichladdich distillery was sold to Rémy Cointreau for £58m, with Reynier stepping down as CEO shortly after the acquisition was finalized.

After its resurrection in 2001, Bruichladdich set on a ten-year journey that culminated with one of their first ten-year-old single malt releases: The Laddie Ten. This fantastic single malt was received with nearly universal praise, and strongly revitalized business for the distillery. It is not hyperbole to say that Bruichladdich literally bet their house and their business on The Laddie Ten being successful. Luckily for them, not only was it successful — and massively so — it actually created a cult following for Bruichladdich that grows bigger every year. 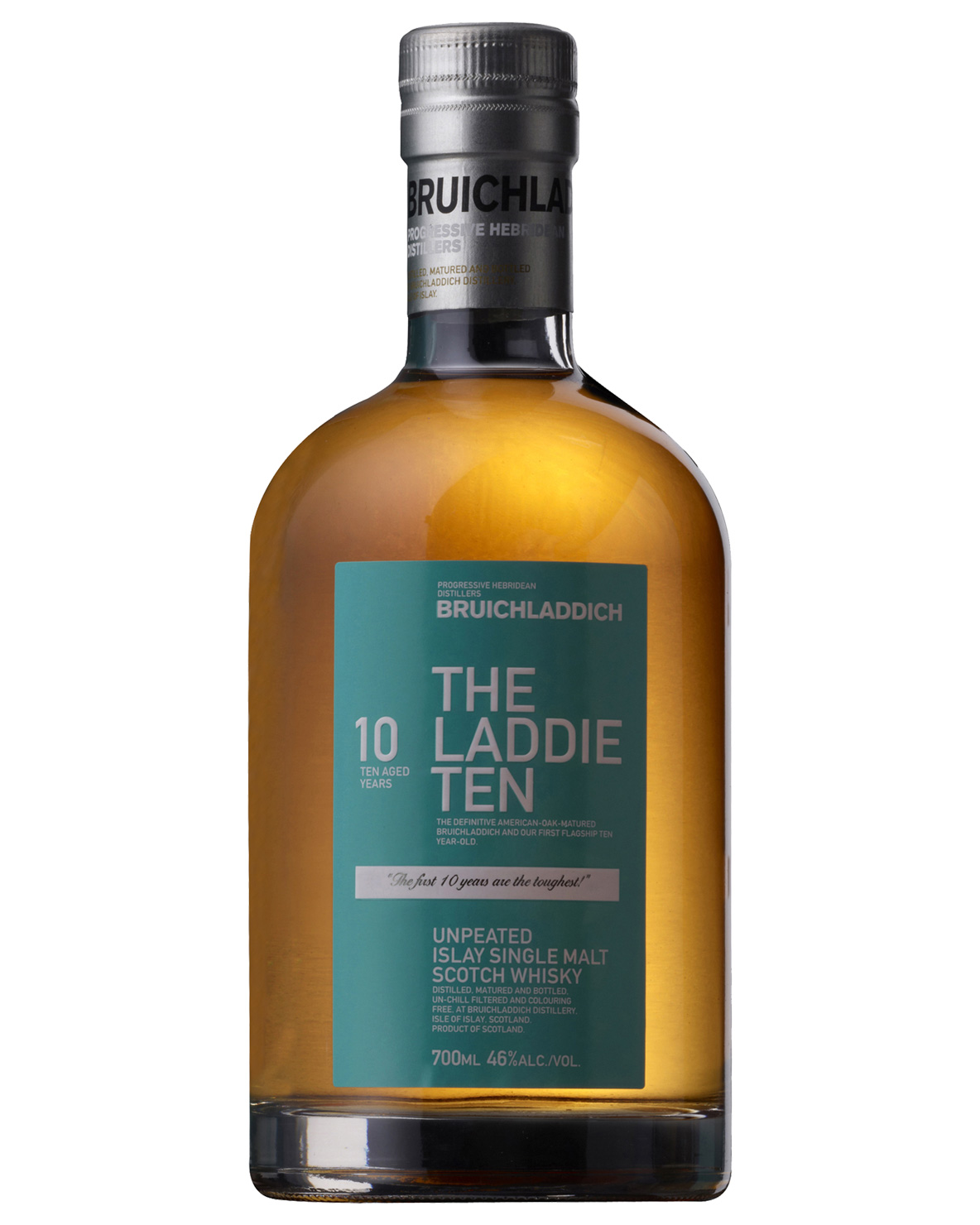 However, what made The Laddie Ten a resounding success also made it an ephemeral one. Being a vintage bottling from a single year (2001), its characteristics were made unique by that year’s weather and the properties of the barley that was used to make it. That unfortunately means that Bruichladdich themselves are unable to produce more of it and once the original bottling sells out, The Laddie Ten will forever be a part of Bruichladdich’s history.

It will then come as no surprise that, due to its extremely positive reception by the whisky world, demand quickly and significantly outstripped supply and over the course of only a couple years, The Laddie Ten became almost extinct. Today it is virtually impossible to find in many countries, and the only place where it’s still being officially stocked is at the Bruichladdich distillery shop — yes, on Islay.

So, unless you’re willing to go to Scotland to get it — which is a perfectly reasonable thing to do, by the way — it looks like you’re going to have to make do without The Laddie Ten.

Which brings us to The Classic Laddie: Scottish Barley. 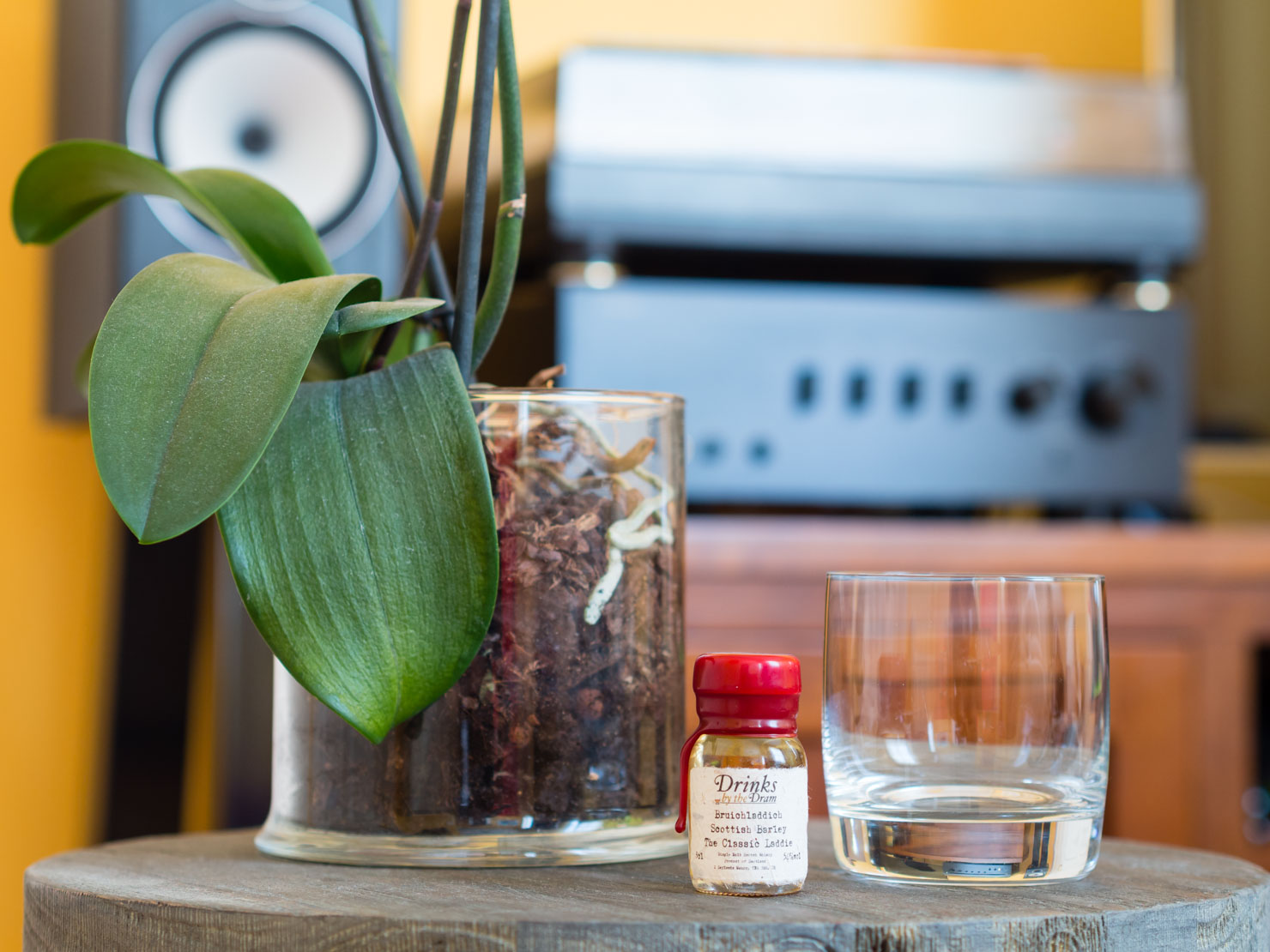 The Classic Laddie was Bruichladdich’s attempt at replacing The Laddie Ten with a similar whisky in a sustainable way. Unfortunately in order to achieve that, they made a couple decisions which may prove to be unpopular among some of the hardcore fans of the original Laddie Ten.

The first of those decisions was the removal of an age statement on the bottle. While The Laddie Ten was a ten-year-old whisky, there is no such statement to be found about The Classic Laddie, which includes several whiskies of different ages in its formulation. This keeps in line with the current trend away from age statements that some of the industry leaders — including most famously, The Macallan — have adopted recently.

The second, and probably most important one is that, being created from several ages, The Classic Laddie will never be the same as The Laddie Ten — nor should it try to be. In fact, this excellent single malt has tremendous legs of its own, which we’ll see more about in a minute. But if you’re looking for a modern version of The Laddie Ten, this isn’t it. 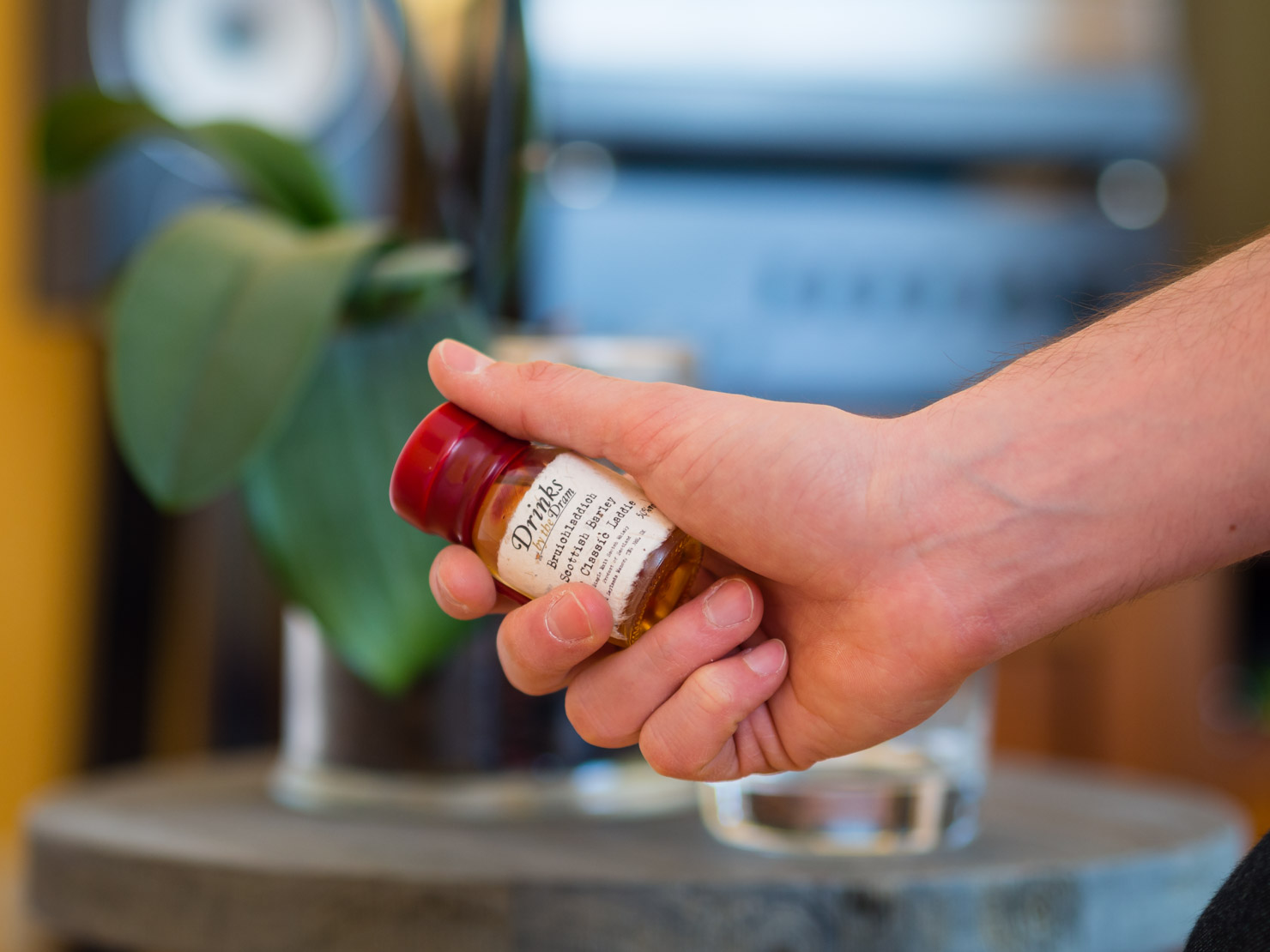 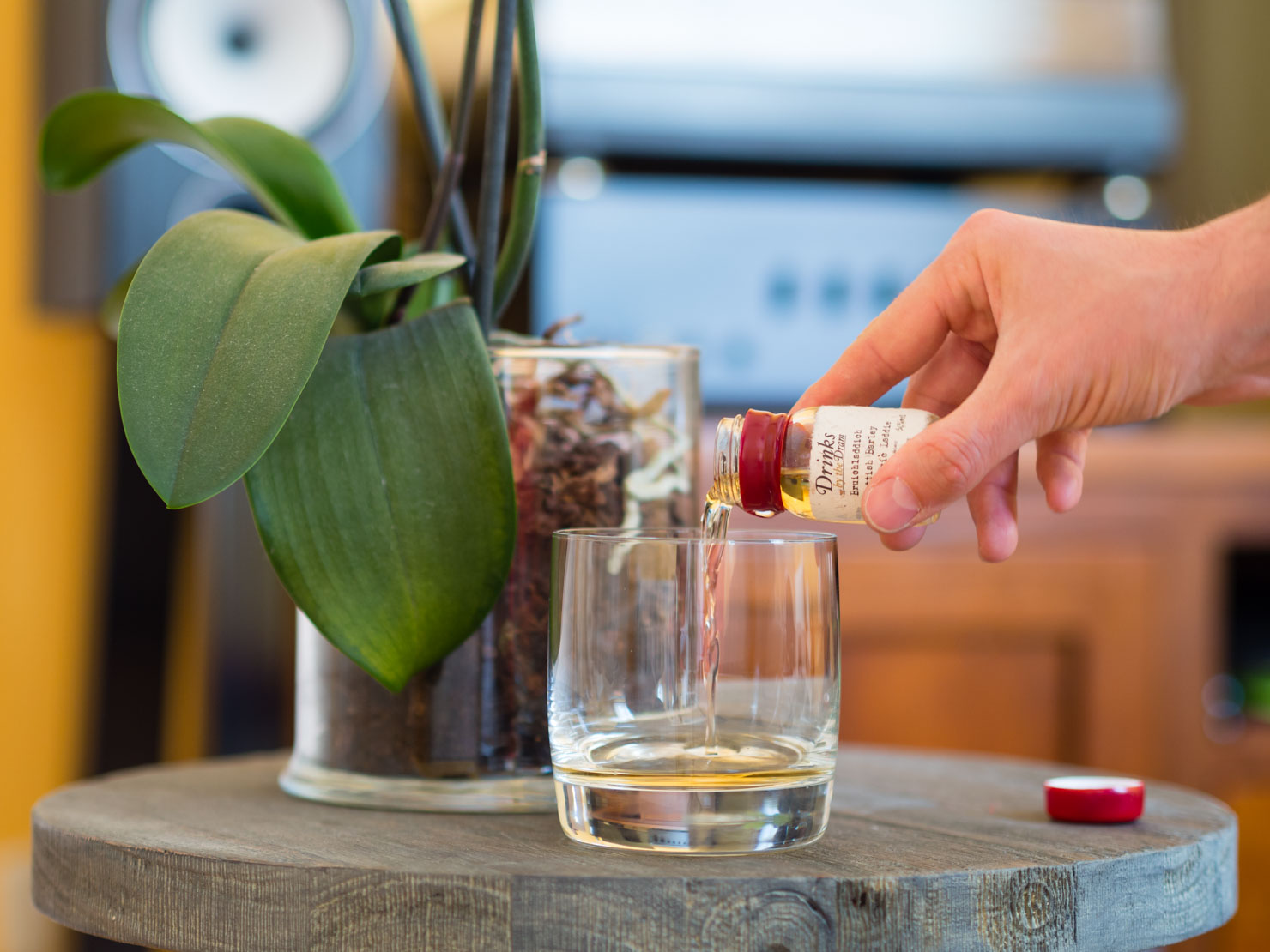 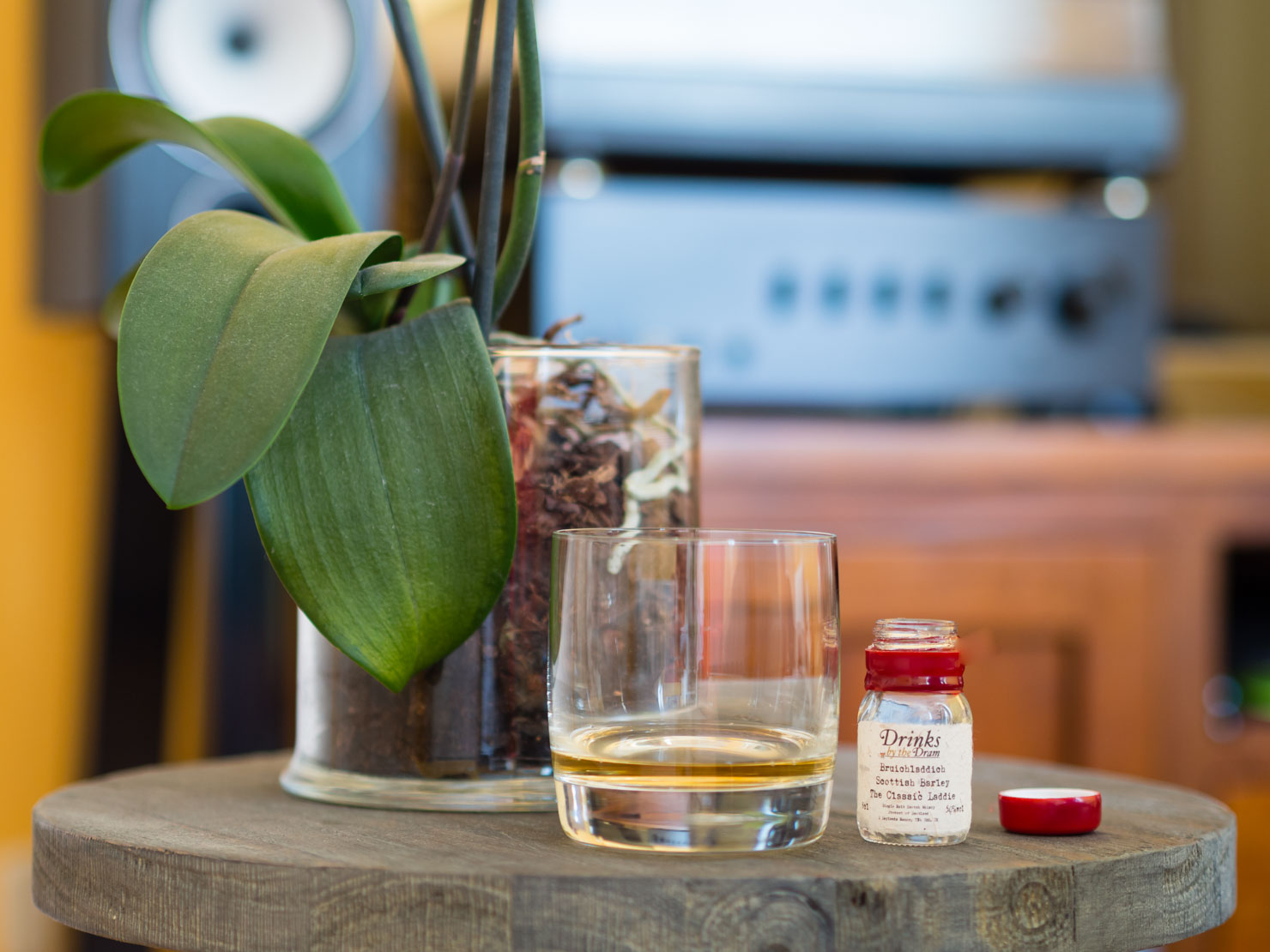 This is a moderately light colored whisky, but it’s also very thick, oily and dense, and it clings to the glass like it never wants to let go of it. I’d say it’s between a 0.8 (deep gold) and a 1.0 (deep copper) on the Whisky Magazine color chart:

Another thing of note about The Classic Laddie is that it’s not artificially colored, so everything you see in the glass is obtained naturally through the distillation and maturation process. And like all of Bruichladdich’s single malts, it is also non-chill filtered.

Extremely fresh and clean. At first deceptively sweet, it then gives way to a more complex scent with many different components: dried fruit, and summer breeze. Perhaps some honey. Adding water opens it up quite a bit and removes some of the strength of the alcohol that sometimes dulls your sense of smell. Then the salty aroma of the sea hits you like a mace. Finally, a note of lemon reveals itself, and perhaps some mint. 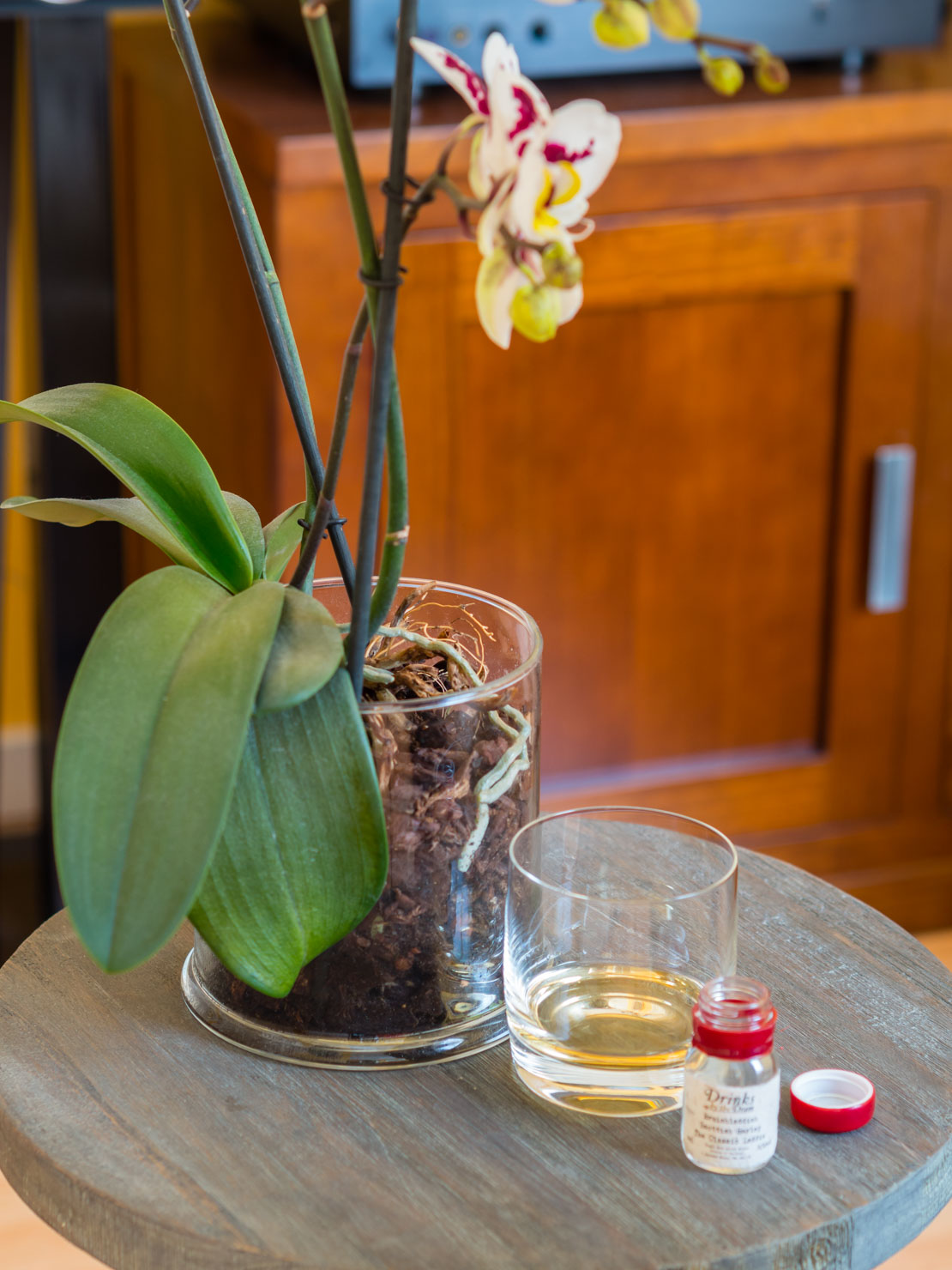 The Classic Laddie is bottled at 50% alcohol, so it will clearly benefit from a splash of water. However, be careful because in my experience, it only takes a couple of drops to bring it down to a very pleasant experience, far below what its alcoholic content would suggest.

Once you do that, the reward is plentiful. With its thick, oily texture, it effortlessly coats your mouth and demands your attention. Here I am, it says. You know that’s what you wanted.

But it doesn’t stop there. Pay attention and it’ll keep talking to you, of non-important, seemingly trivial things at first.

Then, it brings all sorts of wonderful memories back. The smell of dirt and mud mixed with grass that was always present on your shorts when you were a kid. Bloodied knees and your heart racing like it’s going to burst out of your chest. The first time you saw the sea. That impossibly long summer evening, when your best friend suddenly became a woman in your eyes. All those moments and many others are suddenly a lot more than mere echoes of a distant past.

Those memories were always there on some level, buried among decades’ worth of duller, less meaningful moments. You’re used to them being there, in that quiet corner of your subconscious — this is your head we’re talking about, after all — but now they’re here, out in the open. Or perhaps it is you that’s back there and then, if only for a few minutes.

And you know what? It feels good to be back. 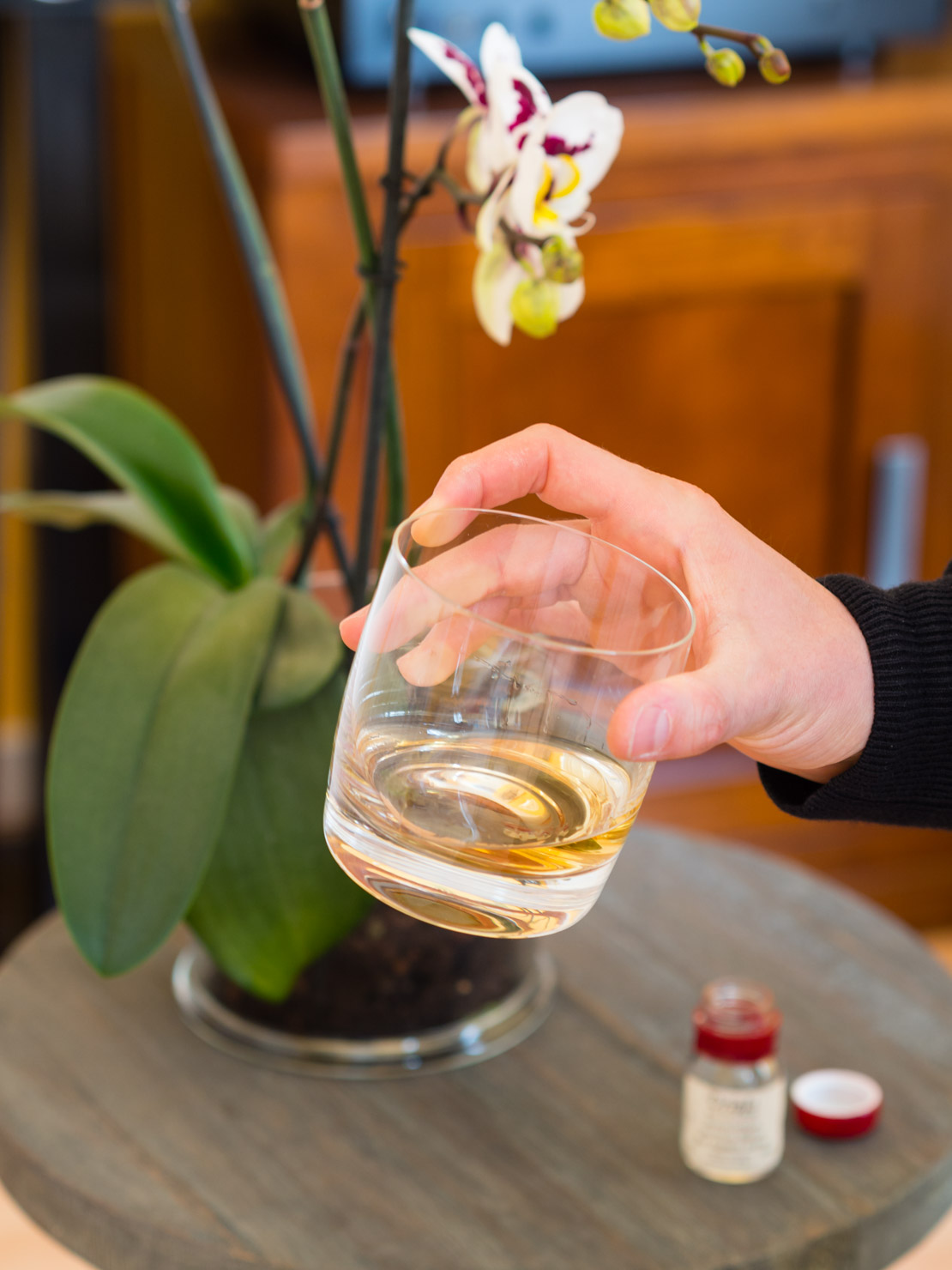 It feels like it could go on forever. Just when you feel like you’re in control again, the aftertaste sends you right back. The smoke that comes up here — despite this notoriously being an unpeated whisky — reminds me of crackling logs on a fireplace, during a chilly winter night when everybody stays close to the fire, and each other. I could stay like this forever if the company is good.

This one’s easy. As much as I enjoy the role of whisky as a social drink, I can’t help but feel you’ll get more enjoyment out of The Classic Laddie on your own, when nothing — and no one — else is fighting for your attention, and you’re free to let your mind wander off to some distant, almost forgotten place that, despite the odds, still feels like home. Just be sure to buckle up for the ride.

My advice is this: pick your favorite record — you get bonus points if it’s a vinyl LP — and make yourself comfortable. In my case, that’s in the company of Miss Ella Fitzgerald and her wonderful, silky smooth voice. For this occasion, I went with her historic rendition of Mack The Knife, which was recorded live in Berlin, Germany, on February 13, 1960.

That record is solid gold, and it goes tremendously well with the liquid gold that is this Bruichladdich. Just hearing Miss Ella charmingly and confidently improvising the lyrics, and doing her remarkably spot-on Louis Armstrong impersonation is enough to send me back to a time when the future held nothing but possibility, and our only obligation was to dream big. 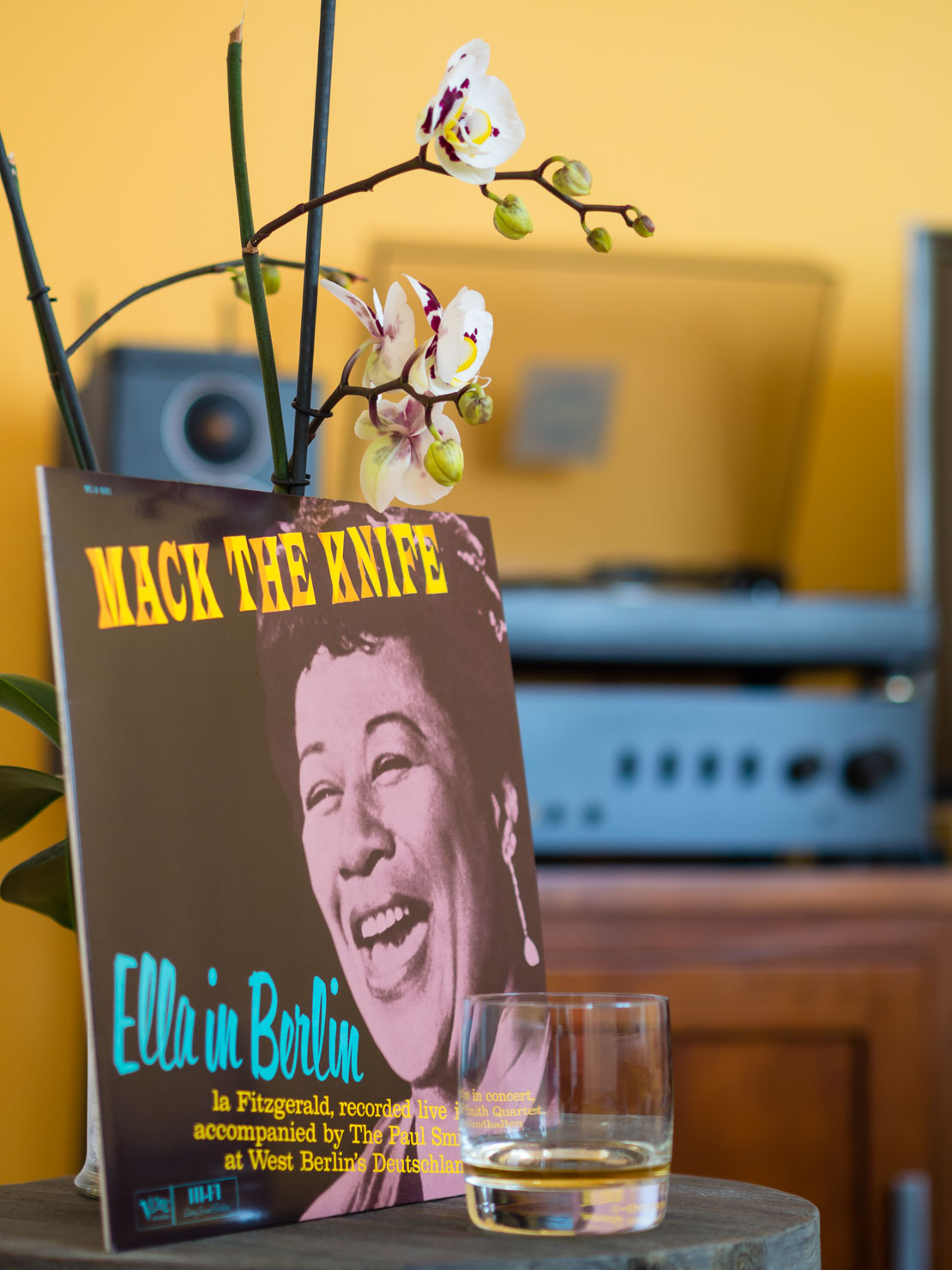 Some of those dreams have come true. Others are gone forever. But some, the most important ones, are still there, waiting for you to remember them.

I’ll be honest, I wasn’t expecting to enjoy this dram as much as I did. It completely blew me away, and made me think of whisky in a whole different way. That said, this is still a dram for special moments, not one I’d recommend drinking regularly. As it happens, you can have too much of a good thing, and it would be a crime to burn this one out.

On a final note, I’m now even more curious to try The Laddie Ten. If The Classic Laddie is this good, I can only imagine what the original Laddie must be like. One thing is certain though, next time I find myself on Islay, I’m bringing a couple bottles back with me.

One of those I will drink right away. The other I will save, in case a day comes when I need to remind myself of who I am, and why I’ll always dream big. 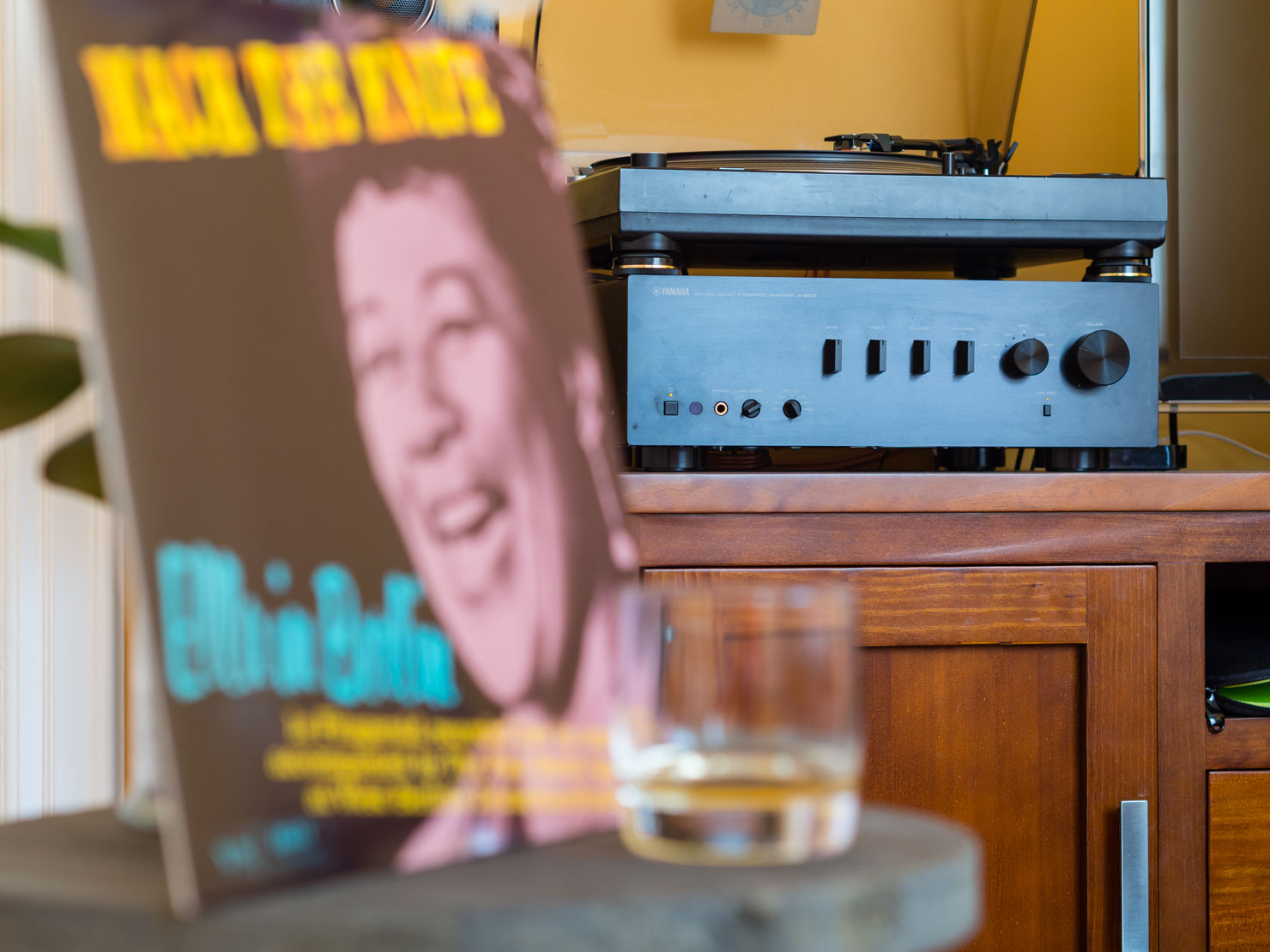