This week was over in the blink of an eye. For some reason, it almost feels like autumn is already knocking on the door. Furthermore, the Apple event is now officially in sight, which means the next few weeks are bound to go by even faster.

For now, though, let’s take a look at some of this week’s most interesting pieces of writing.

Issue #12: On creativity, legendary athletes, legendary filmmakers, and your weekly dose of the Sony A7R II

Great piece by Shawn on how our brains operate when dealing with complex tasks that require us to engage several different cognitive functions:

Each of us are dominant in one of these four quadrants. You, dear reader, have some strength and some weakness of all four quadrants of learning and thinking style, but one of them is your most dominant. Do you mostly thrive on: Facts and logic? Form and Safety? Feelings and relationships? Or future ideas and concepts?

However, for us to do our best creative work — work that matters — we have to operate out of all four quadrants.

I’ve always believed that, order to improve upon something, learning how it works is an essential first step.

As if by some weird coincidence, this piece by David Cain serves as the perfect follow-up to Shawn’s article above:

It’s the bigger principle that’s important though. Whenever you do one thing well and another thing poorly, you can learn why by picturing yourself doing X with your usual approach to Y, and vice-versa. Maybe you run your business like Jeff Bezos, but you run your household like Homer Simpson. What would your Jeff Bezos side do with your household? What would your Homer Simpson side do with your business?

Last Sunday, 34-year-old Roger Federer defeated World No. 1 Novak Djokovic in the final of the Cincinnati Masters 1000. This is the 24th Masters 1000 title for Federer, and his 7th title in Cincinnati. It’s also the second time he’s won the tournament without losing a set and without dropping his serve all week. These are all staggering statistics.

Moreover, it’s the second time this season that Federer beats Djokovic for a title, the first one coming in Dubai earlier in the year. As for Djokovic, he’s beaten Federer three times this season, in the finals of Indian Wells, Rome and Wimbledon.

However, much has changed in Federer’s game since the Dubai final. The Swiss player is being more aggressive than ever on the return, often employing seemingly insane tactics, like returning serve directly off a half-volley and then immediately charging the net.

Yet, as they say, the distance between insanity and genius is measured only by success.

All through the tournament, but specially on Sunday’s final, Federer’s tactics were indeed genius:

At a key moment in the first set tiebreak of Sunday’s final, Federer frustrated Djokovic with the ploy. Federer led 3-1 when he moved up to the service line as Djokovic hit a second serve. Most second serves go to the backhand side, but this time Djokovic threw in a surprise, a slice to Federer’s forehand. Federer lunged to his right, blocked a short-hop, half-volley return down the line and crowded the net. Djokovic missed a backhand and then raised his racket over his head in anger, but resisted the urge to smash it to bits. Federer won the next three points to take the set.

I find it amazing that a player that’s won more than anyone else in his career still has the passion, the energy and the work ethics to reinvent his game at 34. If there’s something the Cincinnati final showed everybody, it’s that Roger Federer is definitely one of a kind.

Only man who can topple Usain Bolt: a photographer on a scooter | Christopher Clarey →

In this week’s IAAF World Championships in Beijing, many records are sure to be broken, and many surprising feats achieved. However, there’s one man who keeps shining above everyone else: Usain Bolt. The Jamaican star won both the 100m and 200m races, claiming his 3rd and 4th World Champion titles, respectively. In both races, American athlete Justin Gatlin was the man in Bolt’s shadow:

Bolt had beaten Gatlin by just one-hundredth of a second to win the 100, but the 200 was a much less suspenseful affair as Gatlin was unable to approach his top time earlier this season of 19.57.

“He came through when it was time to come through,” said Gatlin, who was also second behind Bolt in the 100 at the 2013 world championships in Moscow.

Much like Federer, Usain Bolt is an athlete for the history books.

This was a very interesting interview for Vulture. Tarantino is not one to shy away from controversial topics, and this was no exception:

How did what’s happening in Baltimore and Ferguson find its way into The Hateful Eight?

It was already in the script. It was already in the footage we shot. It just happens to be timely right now. We’re not trying to make it timely. It is timely. I love the fact that people are talking and dealing with the institutional racism that has existed in this country and been ignored. I feel like it’s another ’60s moment, where the people themselves had to expose how ugly they were before things could change. I’m hopeful that that’s happening now.

The Apple Watch at work and play | Fraser Speirs →

Excellent piece. I like how, despite this being a decidedly positive take on Apple Watch, he doesn’t sugarcoat his experience with it:

Before I get into my thoughts about what the Watch is good for, I think we should acknowledge something: it is a complete nonsense that Apple ever shipped an operating system where in about 3 in 5 tries, an app simply will not launch. To me, this is the glaring flaw in Apple Watch: apps need to be instantly available at all times and respond quickly. Otherwise, what’s the point? If it’s not quicker than reaching for the phone, why bother?

I’m putting a lot of faith in watchOS 2.0 to fix this problem. I hope it’s not misplaced.

Fun and spot-on criticism of modern web design by Dave Ellis. Check out the mockup and tell me it doesn’t ring a bell or two. Via Daring Fireball.

Good examples from Marco on the shadow recovery capabilities of the Sony A7R II sensor, and how that can save your pictures when you make a mistake on the exposure parameters. It’s worth keeping in mind that screwing up the exposure is something what will happen from time to time, no matter how careful you are, so being able to work your way around it is definitely a nice plus.

Recently, I’ve been running into friends who’ve done really well for themselves. A friend still in his 20’s whose tech start-up is worth hundreds of millions of dollars, a close childhood friend who bought a new Porsche 911, several others who run successful businesses or are directors or VPs of large corporations, and everyone who seems to be living in a home larger than 400 square feet (that isn’t packed to the brim with camera equipment). In the photography world, I have friends who are massive industry icons with hefty social media presences. In comparison, I am a virtual nobody. At times, I can feel inadequate compared to them.

Anyone who’s ever decided to strike out on their own, especially those who work in a creative endeavor, have felt this way at some point in their careers. It’s important to acknowledge these feelings, but it’s also important to not let them discourage and distract you from your end goal.

And about that Sony A7R II review:

The camera does exactly what cameras do. It is more similar to the camera you already have than it is different. It’s a nice toy. However, it is highly unlikely that my clients will notice any difference in what I deliver to them. Verdict: buy it if 1) you have enough in your bank account to buy it outright and to cover life expenses for at least three months 2) the differences in this camera compared to yours will result in new business and; 3) it provides greater shooting enjoyment.

Definitely a concise review but, in all fairness, I’ve seen worse.

Like I said in the beginning, it seems time really is flying these days, and without even realizing it we’re almost entering September. I’m excited to see what the Apple event holds in store for us, beyond new iPhone models, of course. The long-rumored new Apple TV, perhaps? Judging by the invitation artwork, it really could be anything.

As for photography, it’s Friday morning as I type this, and I’ve just received the Sony Zeiss 55mm f/1.8 lens a few minutes ago. I’ve barely had any time to inspect it yet, but suffice it to say I’m just as impressed by its build quality as I was with the 24-70mm zoom. The 55 is considerably smaller and lighter than the zoom, but it feels just as solid and well-built. I really can’t wait to use it more extensively in the coming days.

Alas, that’s going to have to wait. I’m spending the weekend in Valle del Jerte, a beautiful valley near Plasencia, where I expect to visit a really gorgeous set of natural pools called Garganta de los Infiernos. Since the risk of getting the camera wet is fairly high, I’m probably not going to take the A7 II with me, so I won’t be able to really use the 55mm lens until Monday.

If I’m feeling adventurous, though, I may take the E-M10 with the Olympus 17mm lens. I still haven’t decided.

Other than that, on Thursday I visited Designing 007: Fifty Years of Bond Style, an amazing exhibit with many original design mockups, costumes, gadgets and props used in the production of the Bond films.

This is a touring exhibit that’s been displayed in London, Toronto, Shanghai, Melbourne, Moscow and Rotterdam before coming to Madrid. It had been in Madrid since May, but for some reason I hadn’t gone to see it yet. I managed to do it just in the nick of time, because this coming Sunday — tomorrow for most of you — is the final day.

Unfortunately, we were not allowed to take pictures inside the exhibit, so I had to make do with the amazing Aston Martin DB5 that was on display at the entrance, next to a life-sized figure of Sir Sean Connery himself. 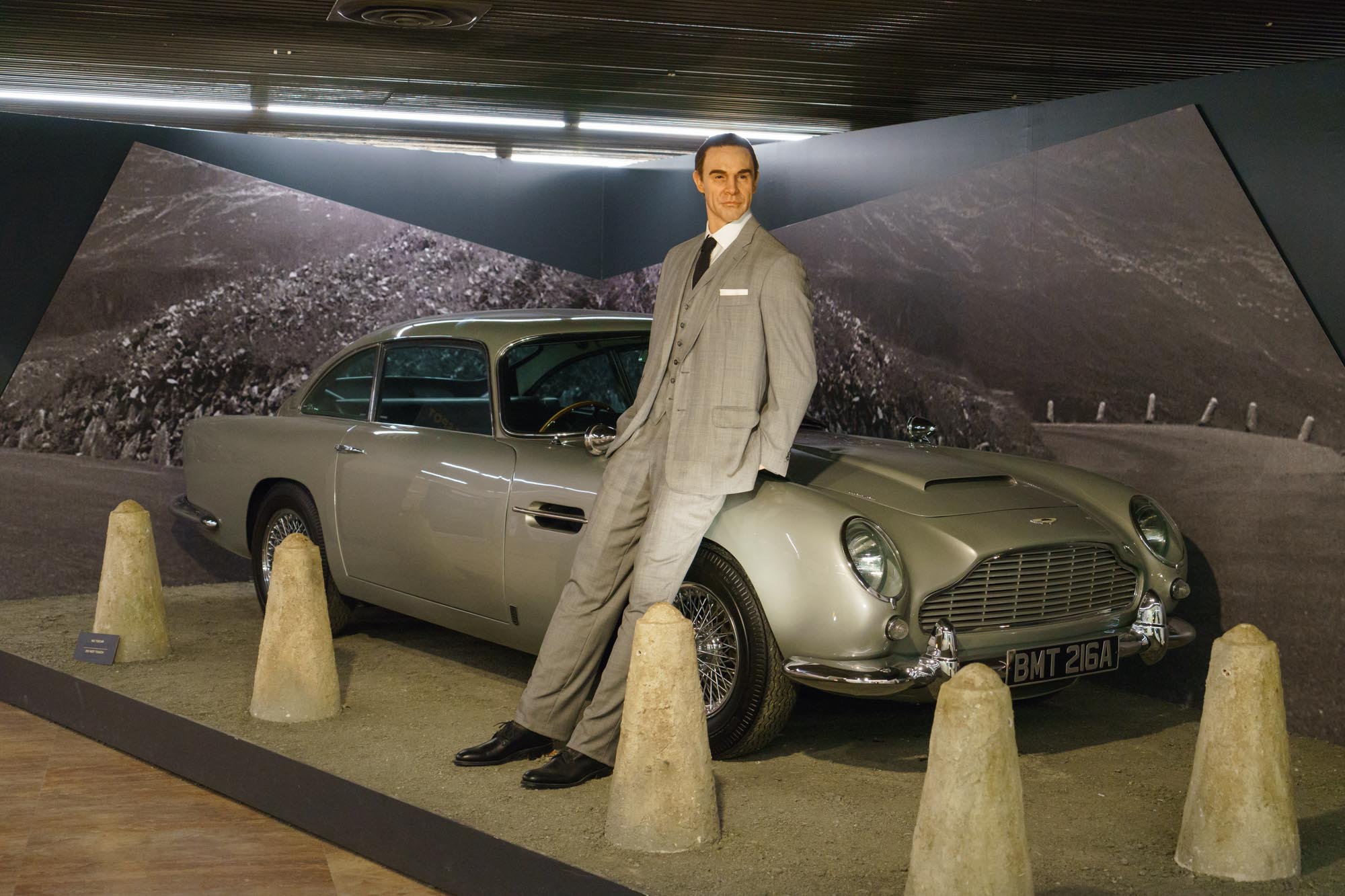 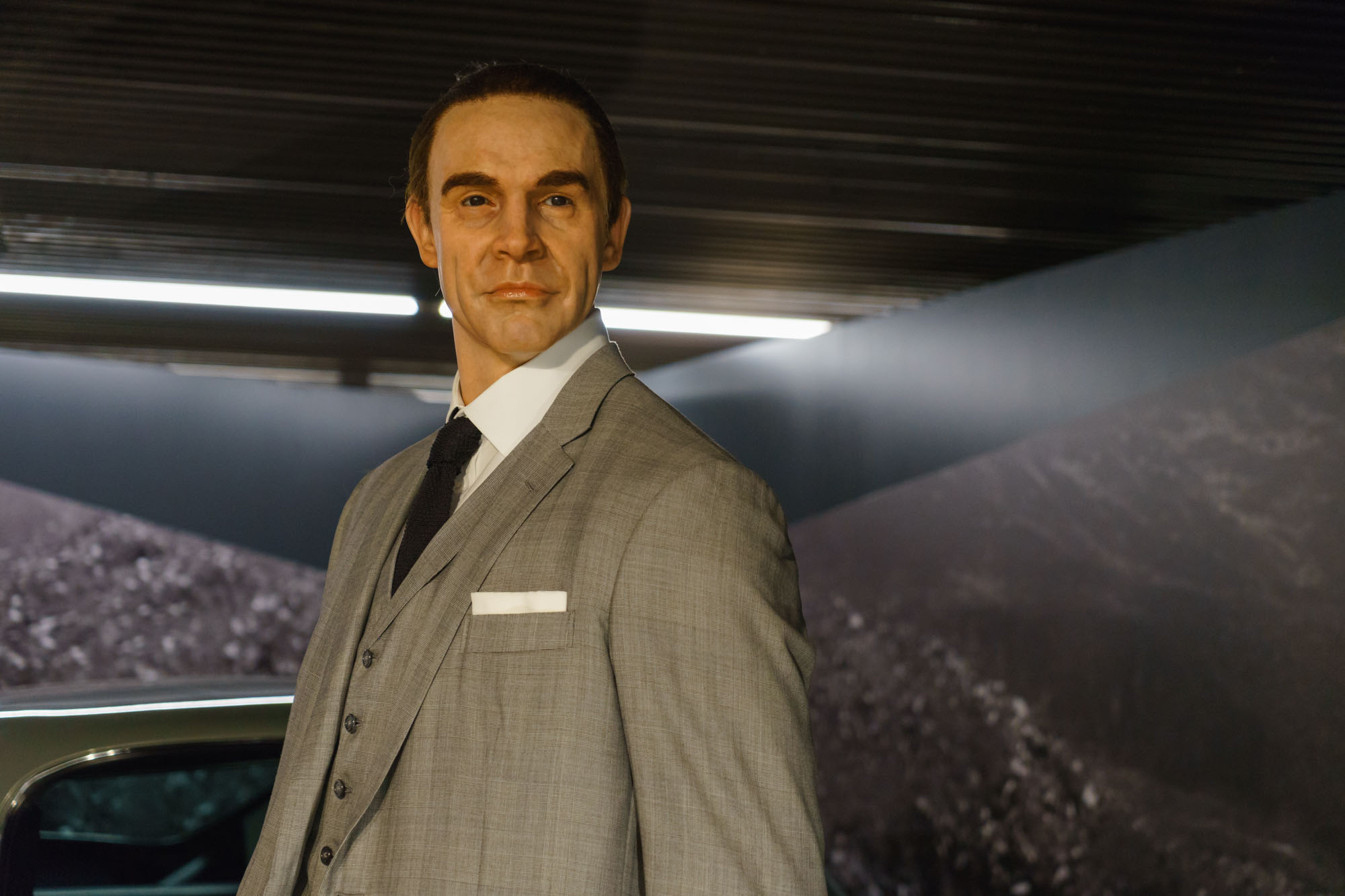 All in all, not a bad experience, and definitely tons of fun for any Bond fans out there. I’m not aware of where the exhibit is going next, but if it’s somewhere near you, I strongly recommend visiting.

And on that note, I’m afraid we’ve reached the end of this week’s issue. I’ll have much more to share with you next week, when I get down to work with the new lens. Until then, have a lovely weekend and, of course, thank you for reading.