There’s no denying the advent of digital photography forever changed the way we take pictures. For all its advantages though, there’s one aspect where it still hasn’t managed to eclipse traditional film photography. I’m referring to that organic quality of film that’s instantly recognizable and sets it apart from any other medium. It’s something that’s just as hard to quantify as it is to miss. We usually describe it as “the film look”.

Indeed, there have been many attempts at replicating the film look digitally, some of which have grown to become tremendously popular. Apps like Hipstamatic first and then Instagram were born with the promise of allowing you to emulate the film look right in your smartphone. Even at the professional end of the spectrum we have things like VSCO Film, a set of Lightroom and Photoshop presets devoted to emulating the look and feel of some of the most iconic film emulsions of the past 50 years.

Those are all great ways to produce images that kind of look like film, but they’re far from being your only option, much less your best option.

Do you know what else looks like film? Film. 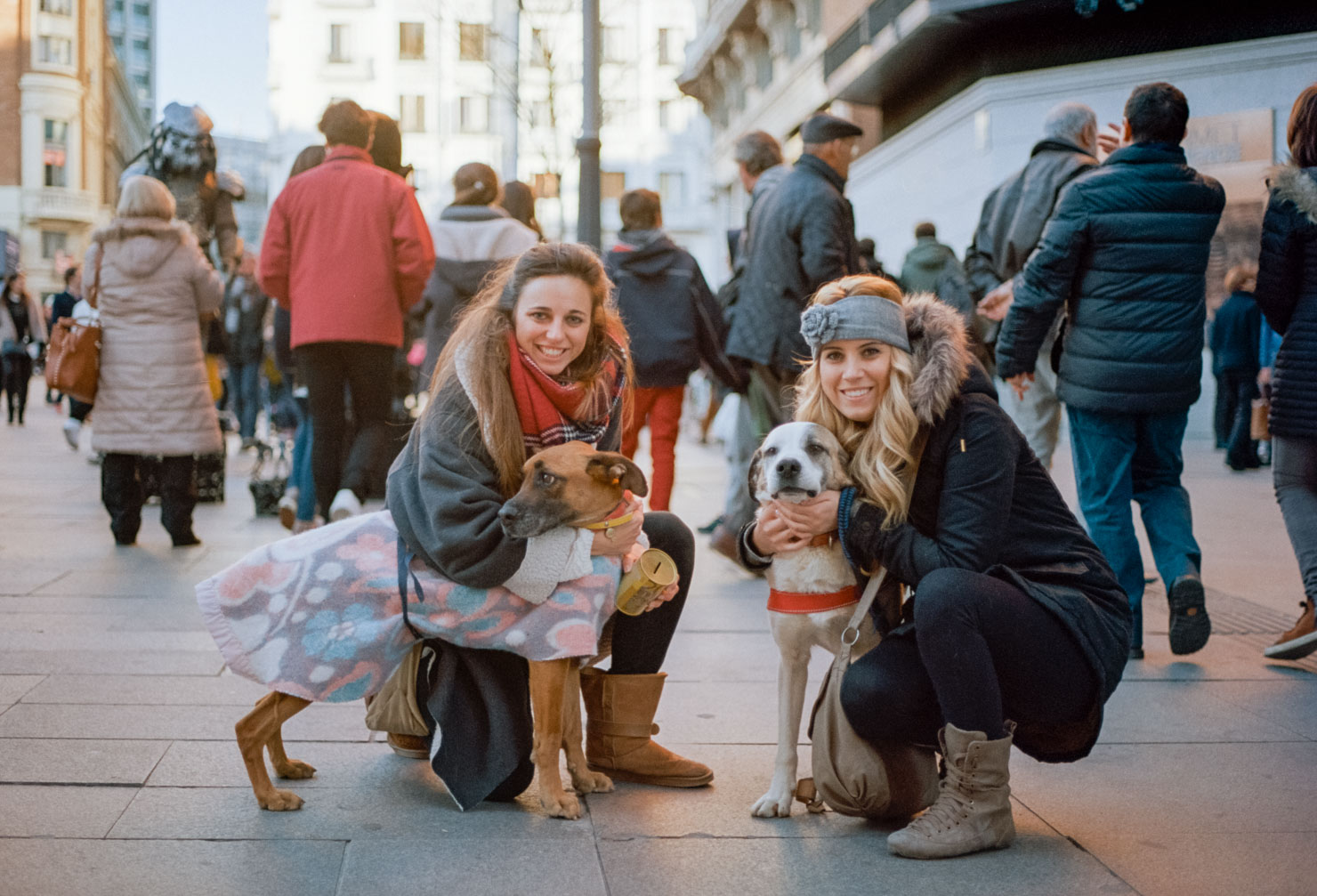 An elegant weapon for a more civilized age

You may think that shooting film in 2015 is a fool’s errand, but you’d be sorely mistaken. There are still plenty of legitimate reasons to do it, far beyond the obvious pursuit of the film look. In some very important aspects, film still vastly outperforms digital.

These are far from trivial things. Take highlight detail, for instance. Digital sensors are notoriously bad at capturing details in the highlights, which is why photographers need to be super careful not to blow them. Once you’ve blown your highlights, there’s no way to bring them back in post production, and that sucks. Features like High Dynamic Range (HDR) sound like incredible digital innovations designed to help ensure you don’t blow your highlights, but the reality is that HDR was invented on film, as early as the 19th century. So much for innovation. 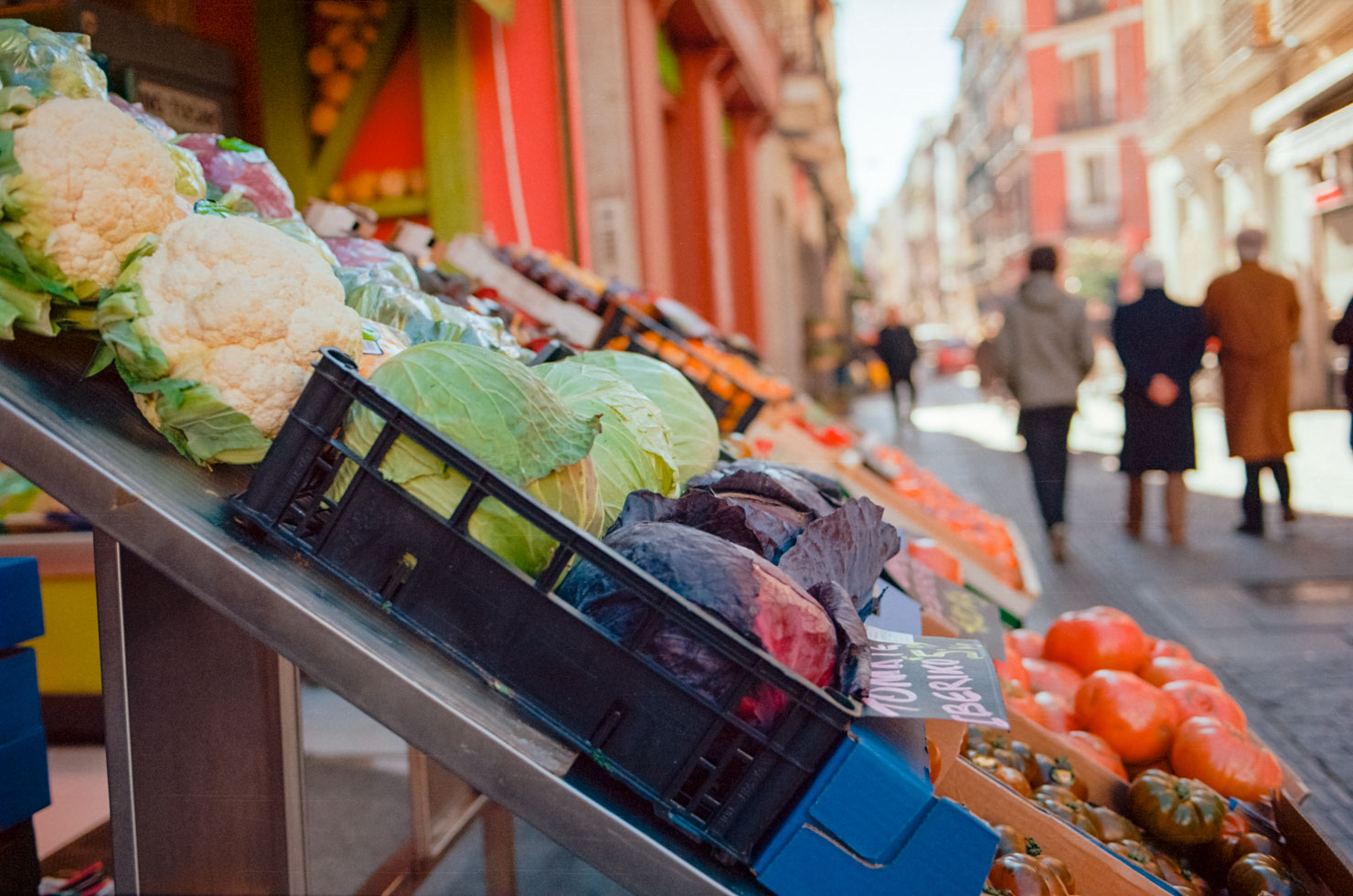 With film it’s easy to shoot a properly exposed scene in the shade without blowing your highlights.

With film, you’re very unlikely to blow your highlights anyway, so features like HDR are a lot less important. Film has so much latitude that in most cases you can overexpose by as much as 6 stops (!) and still be able to bring the highlights back to usable levels. That’s like having professional-caliber HDR built right in, for free. Actually, the difference in highlight behavior is so important it’s one of the very first things you need to learn when you start shooting film, especially if you’re coming from digital: instead of having to balance your exposure parameters to preserve the highlights, you expose for the shadows and let the highlights fall where they will. In 99 times out of 100, you’ll be fine.1 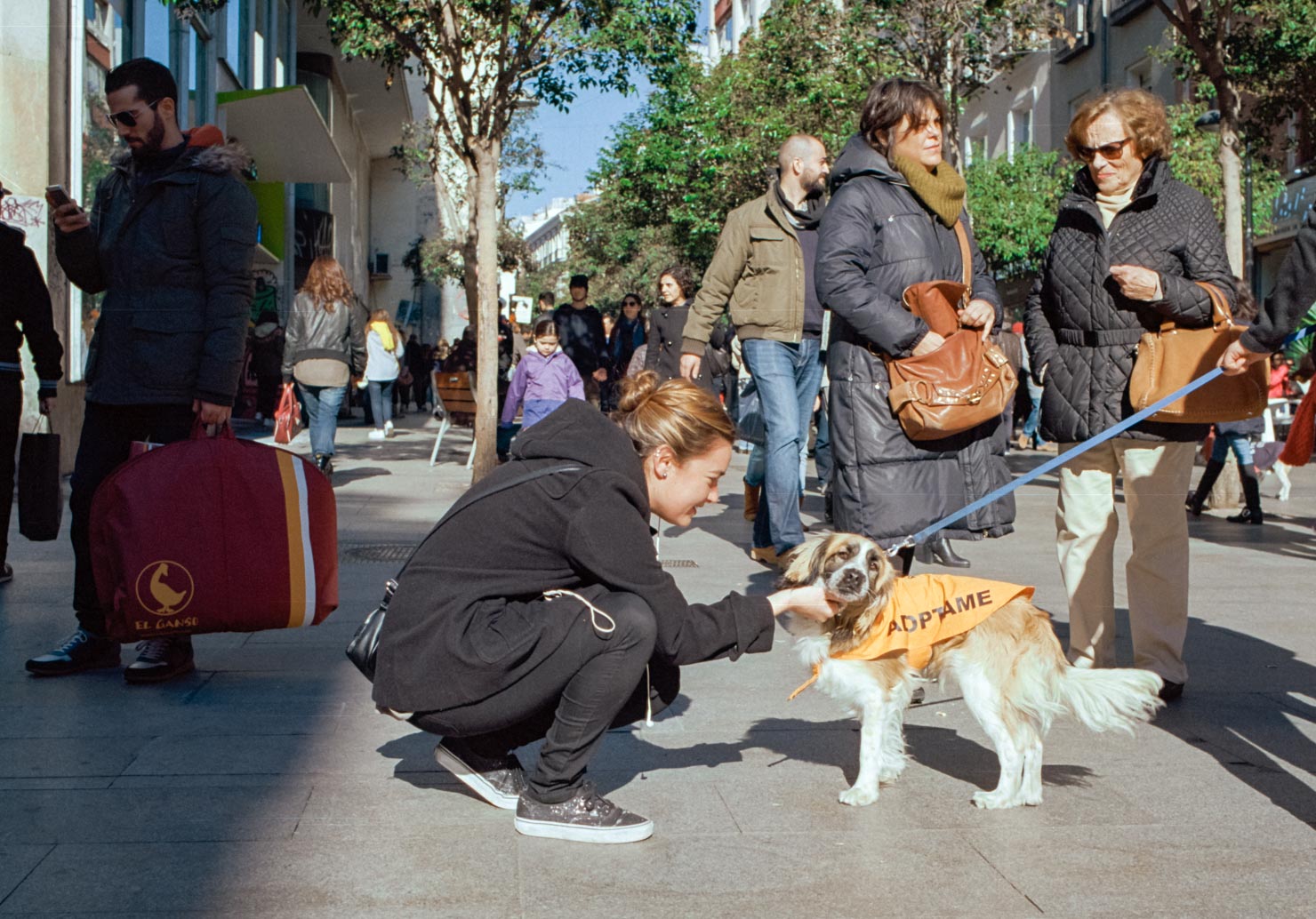 Film gives an extra bit of character to your images that is ideally suited for street photography.

Another frequent myth about shooting film is that it’s somehow incredibly difficult. I suppose the idea comes from not being able to see the result right after taking a picture but the truth is, it’s really not. As long as you know what you’re doing, shooting film is surprisingly easy. You just need to slow down a bit more than with digital, and get used to composing your images in your head and anticipating the results. This is good, as it makes you a more deliberate photographer. 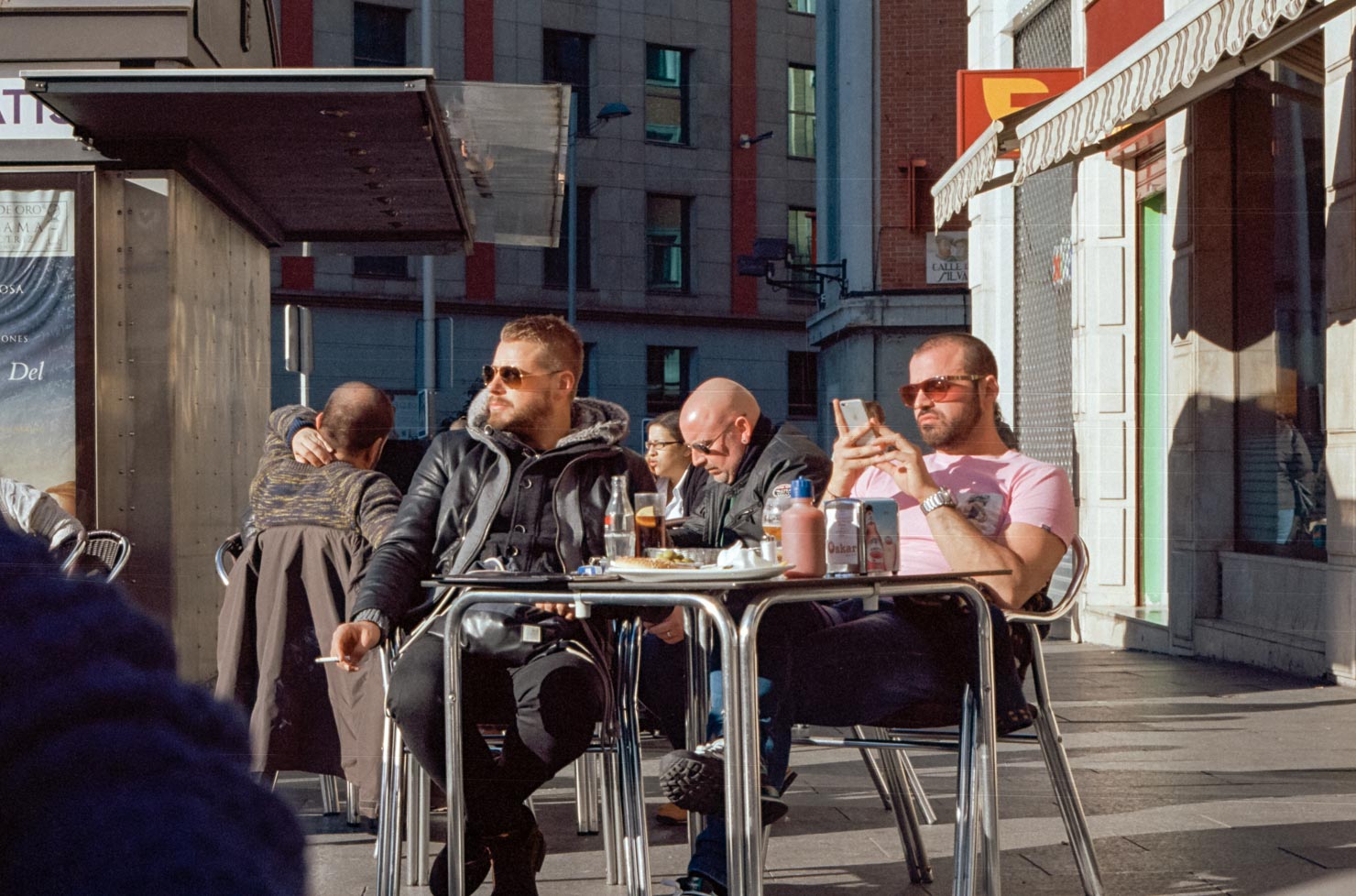 Moreover, film is way more efficient. With digital, it’s easy to let yourself go crazy and take a few extra pictures each time, just for peace of mind. That sounds like a good idea but in practice it’s a very short way from there to becoming sloppy.

That extra peace of mind is way overrated, and often translates into doing more work in the post-processing stage than you really need. Let me give you a concrete example. For my review of the GORUCK GR2 for Tools & Toys I shot well over 1,000 pictures and 13 GB of photos. I then had to narrow that down to about 75 candidates, of which only 43 made it into the published article. This represented many hours of post-processing work that would have been better put towards a more productive end.

Obviously, when you’re working in a web-based environment, digital has many essential advantages, and shooting those images on film was never an option. However, had I approached the situation with a more film-like mindset, the entire process would have been a lot more efficient. 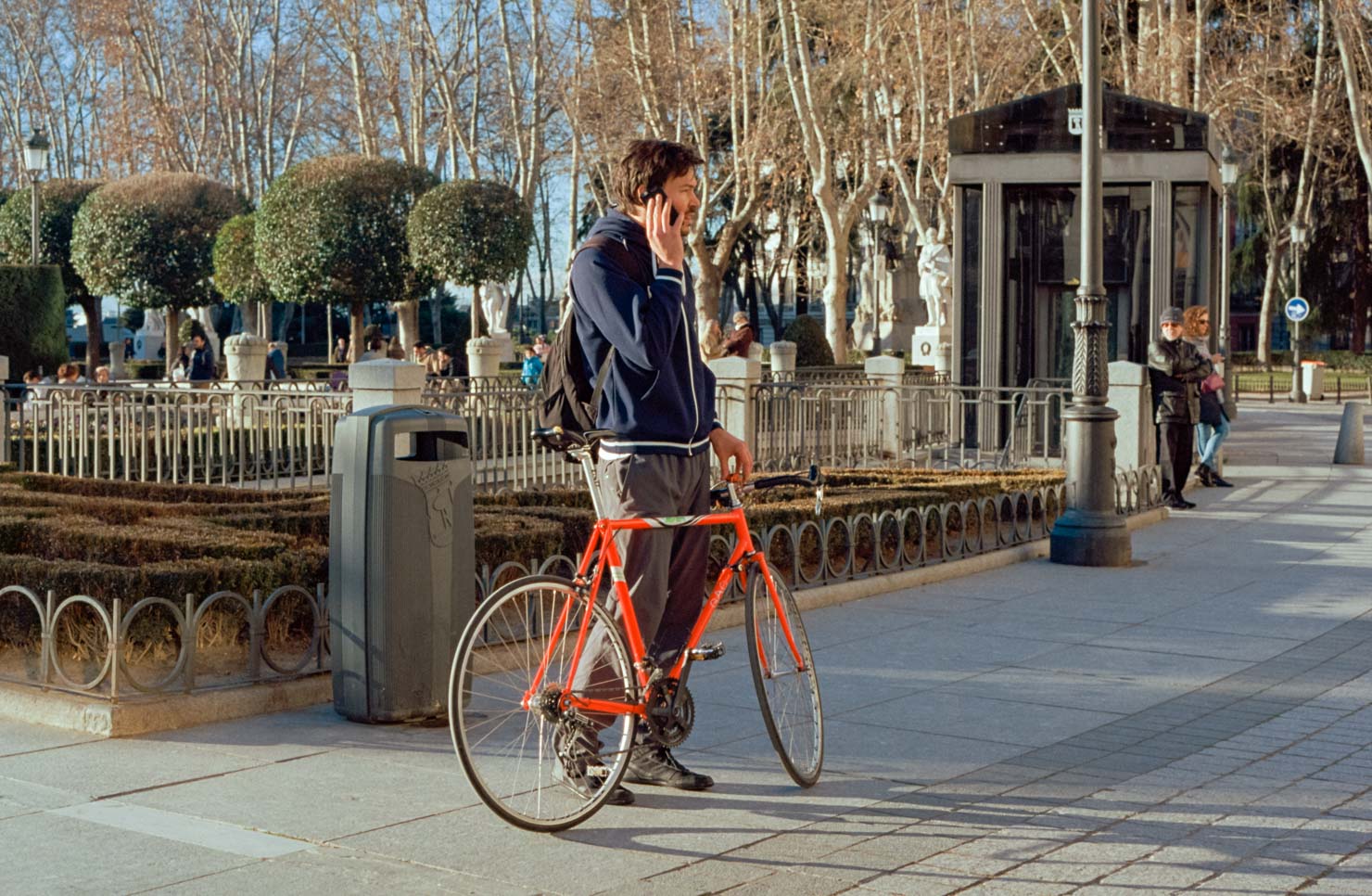 Black and white are the colors of photography

Another huge area where film remains unmatched is black and white. The amount of fine texture detail captured on traditional silver-based film is much greater than anything a digital sensor can do. The difference is not readily apparent in 35mm film, but it becomes immediately obvious for medium format and larger film sizes. Until you’ve seen a black and white picture optically printed from a medium format negative, you don’t know what black and white photography is supposed to look like. It’s not even close. 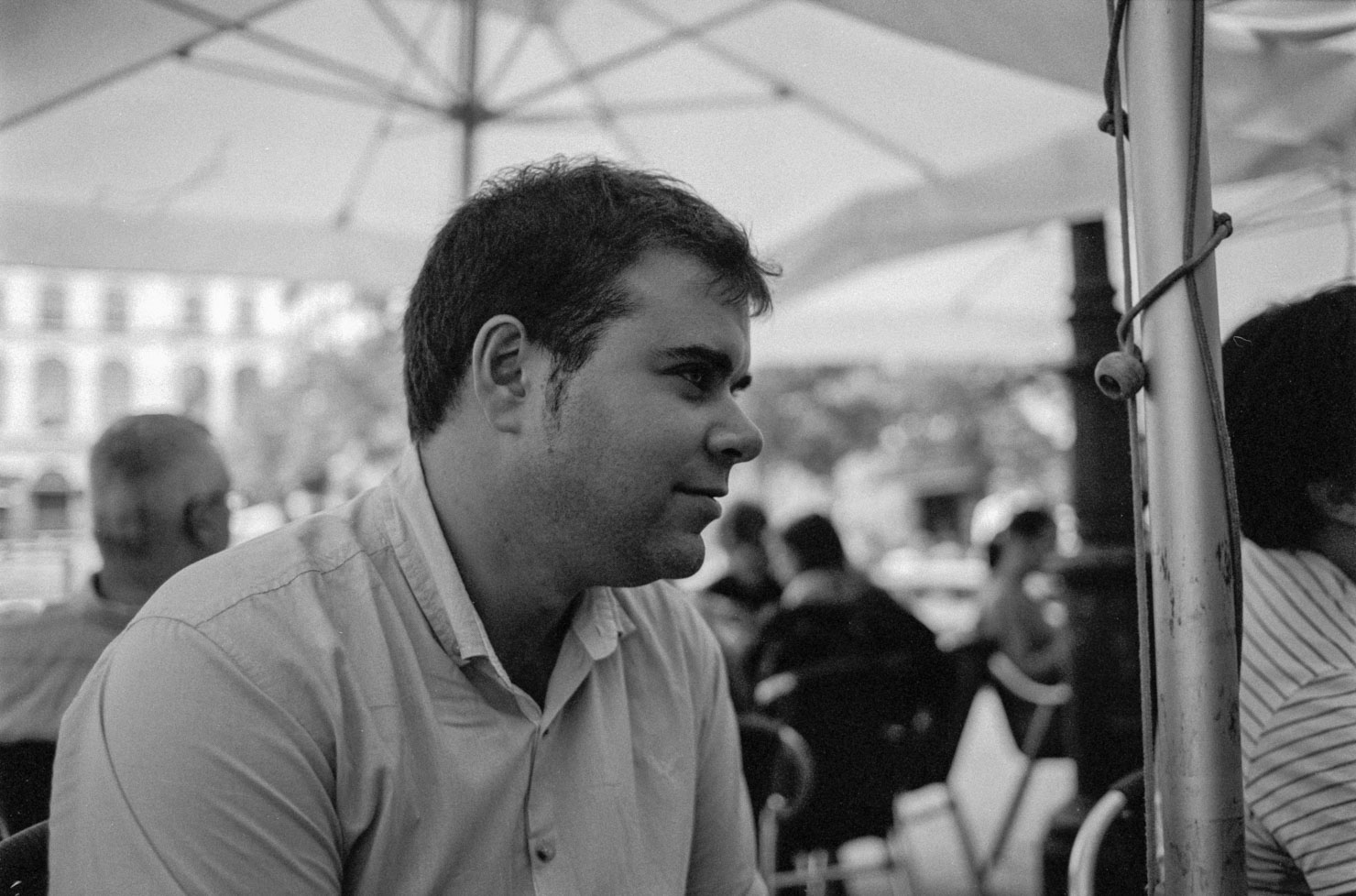 This is Kodak Tri-X 400, one of the most popular B&W films because of the beautiful texture of its triangular-shaped grain.

Current DSLR sensors have been getting better at black and white for a while now, to the point where their performance is roughly on par with 35mm film. If you work primarily on digital and your main output is to the computer, a modern DSLR can certainly offer you more than you need. However, you still won’t be able to get optically printed copies from your digital files, and that’s a shame. All film photographs, but particularly black and white ones, are meant to be seen on actual paper, not on a computer screen. 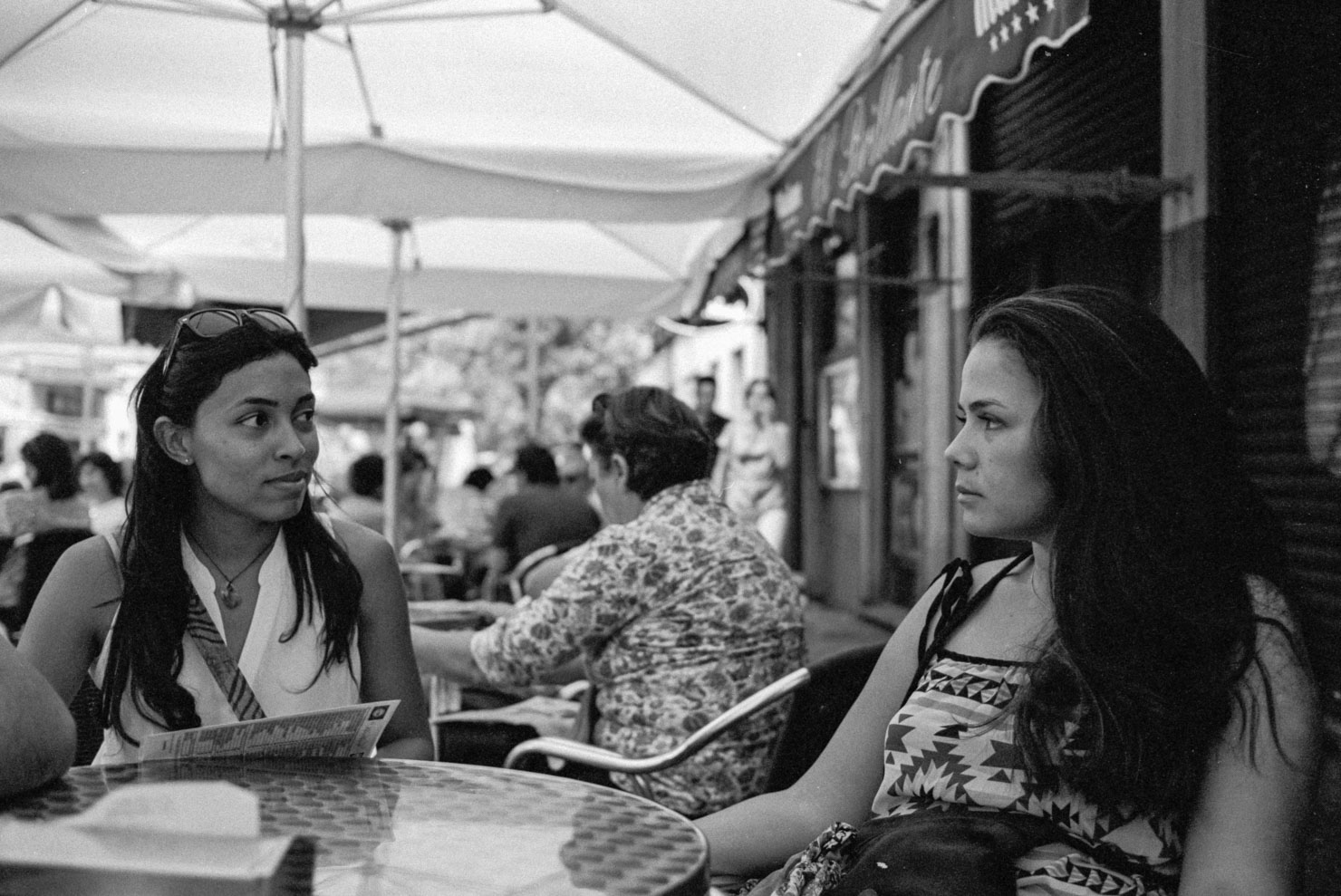 Optical printing is, of course, the marquee feature of film. This procedure allows you to print large and still get incredible detail and texture because you’re not limited by DPI and pixel resolution in the same way that digital images are. There are some limits to optical printing, of course, but it gives you a lot more room to play with, and the end result is always gorgeous. 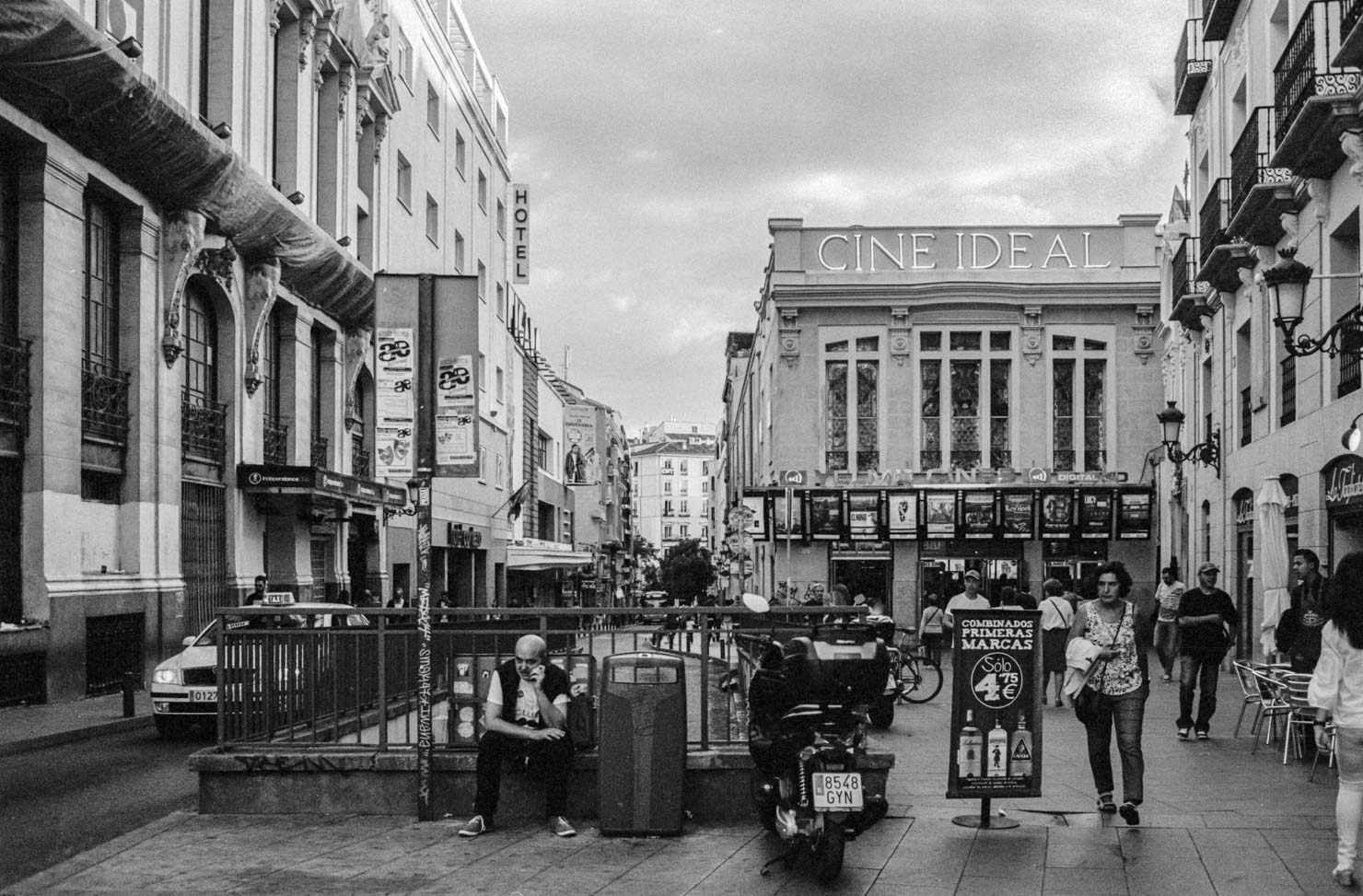 One thing to keep in mind is that the advantages of film photography do come at a steep price, mainly in terms of convenience. There’s no argument there. Shooting film is a much more involved process, and it takes time and effort to be done properly.

I’m not advocating for a return to shooting film exclusively, far from it. You would have to pry my Olympus digital camera from my cold, dead hands before I willingly give it up. However, shooting film on occasion is a perfectly acceptable choice, and it’s a lot more accessible than people think. I’d argue the lessons you get from it far outweigh any inconveniences, and every photographer should at least experiment with it for a while, because if nothing else, it’s still a phenomenal formative experience. 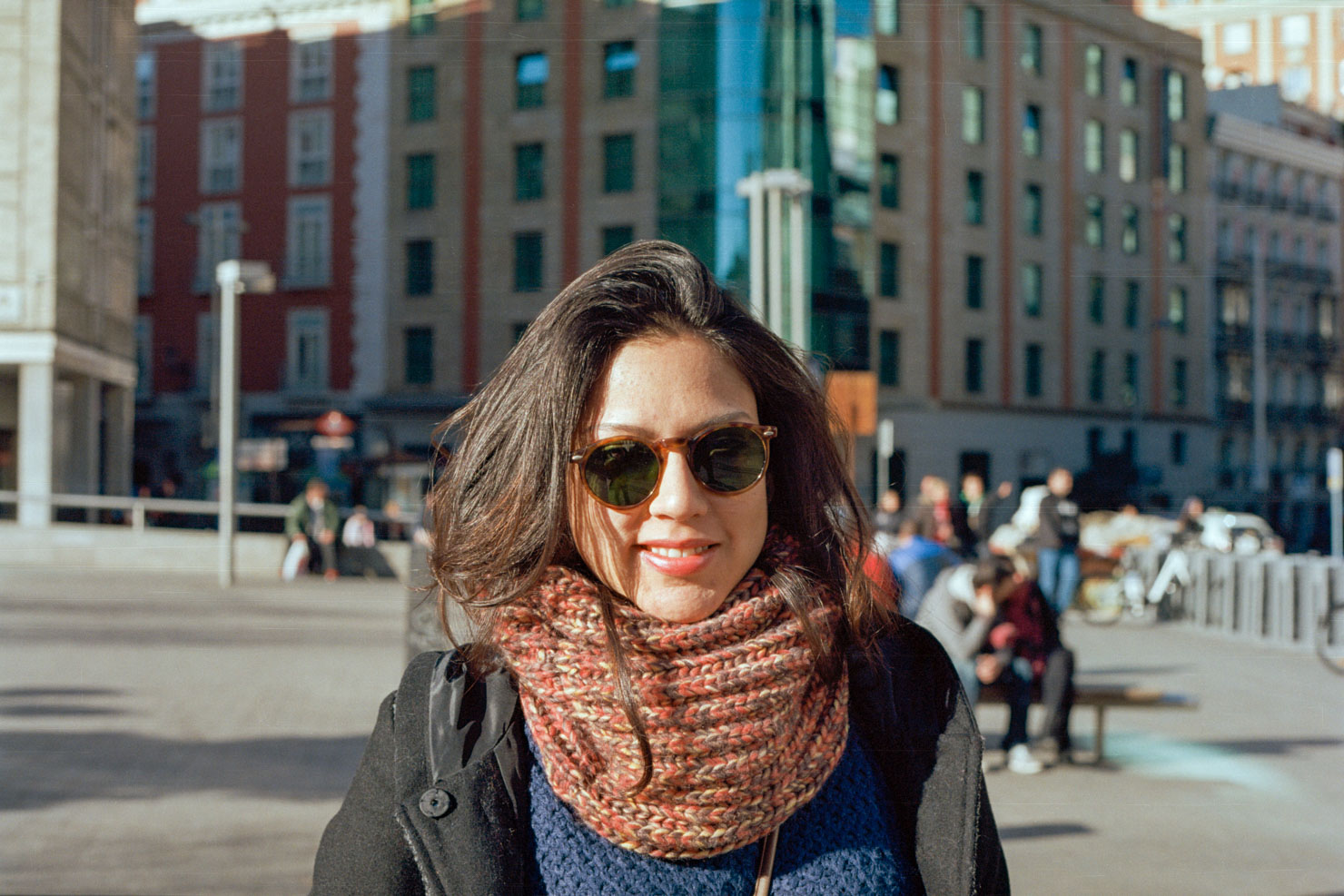 I’m definitely glad I decided to pick up my father’s old Canon AE-1 Program and started playing with it. In just a few months I’ve learned many things, and I can see how my style and compositional skills are growing. It’s all very encouraging, which is why I’ve recently purchased a Canon EOS 3 film SLR and the original Canon 50mm f/1.8 lens on eBay. 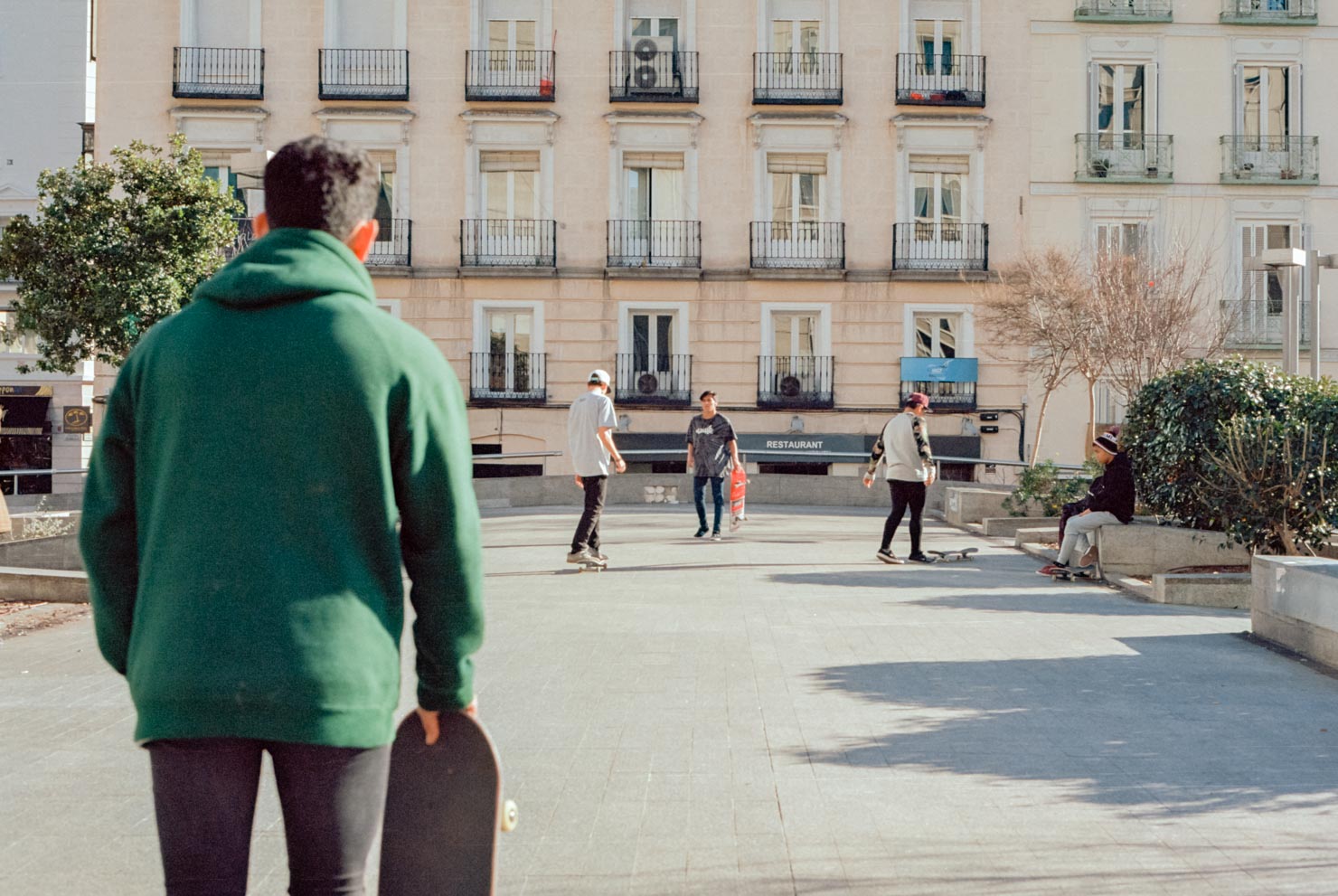 The AE-1 Program is a fantastic camera. In fact, all images in this article were shot with it, but I’m finding the manual focus to be a bit limiting in certain circumstances. There have been a few times when I wanted to capture a street scene but didn’t manage to nail focus in time, for example. I know I’ll get better at focusing manually with practice, but it’s in these situations that I wish I had a more advanced camera.

Luckily for me, you can pick up any professional-grade SLR these days on eBay for a tiny fraction of its original cost, so if you really want to try shooting film with an awesome professional camera, nothing’s stopping you.

There’s nothing wrong with preferring digital but to me, not even getting to know film is a shame, because you’d be missing out on one of the greatest and most rewarding experiences photography can offer. Personally, I’m determined to continue exploring this creative outlet, and I intend to savor every minute of it.

Going forward, it’s my intention to turn “Adventures in Film Photography” into a running series of articles on Analog Senses, much like my Geek’s Introduction to Whisky series. I’m very much looking forward to exploring the many subtleties of this topic over the coming weeks and months, and sharing the results with you. 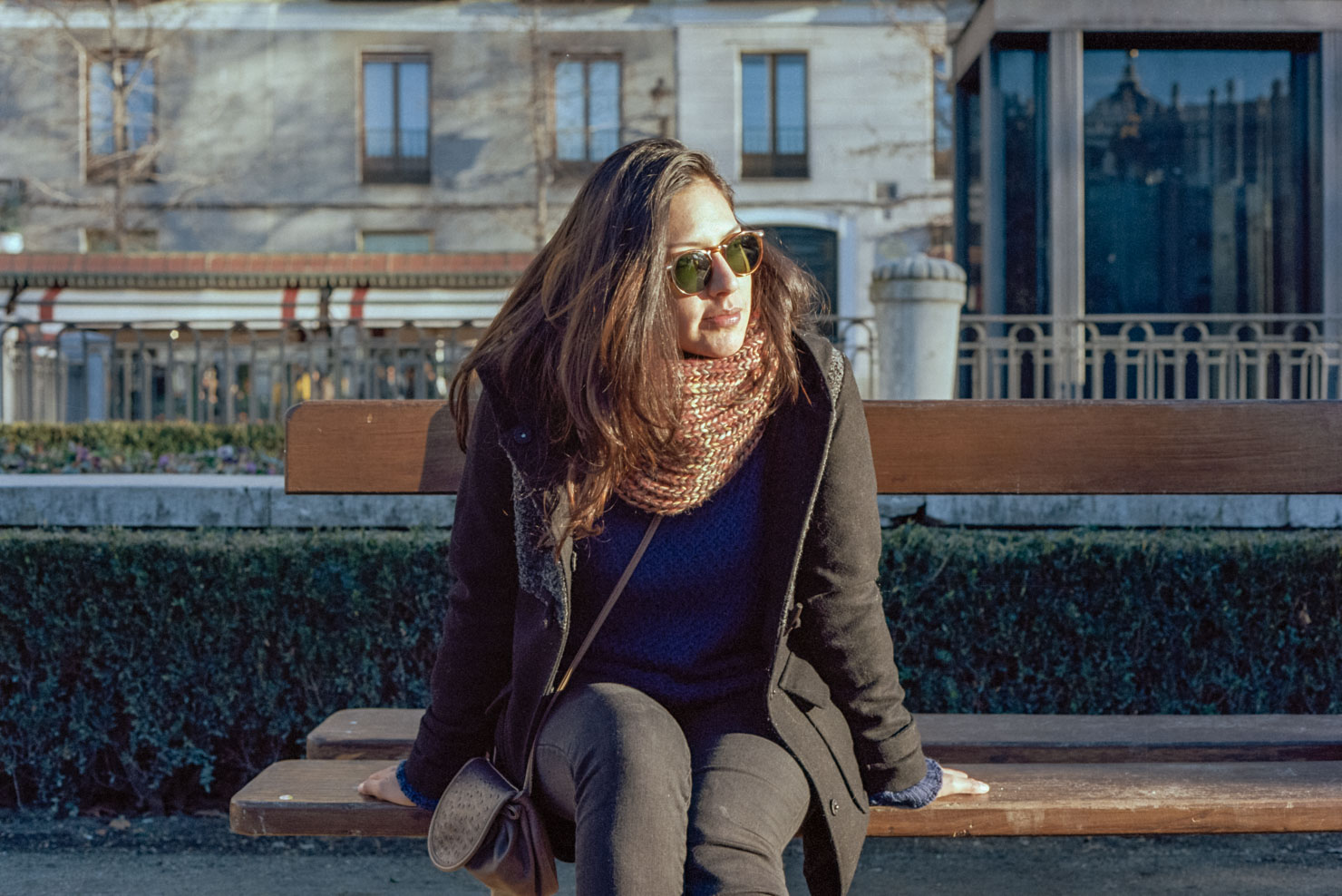