I believe it’s one of the most remarkable inventions in human history and if I can, I ride one every day. I don’t mean in a sporty, lycra-clad kind of way, but as a normal person wearing everyday clothes. The bicycle is my usual means of transportation in Madrid.

Bicycles thrive in the city, where the average trip is often just a couple km long. In that scenario it is usually, by far, the most convenient way to move from point A to point B,1 without having to worry about things like finding a parking spot. It also happens to be really good for your health.

Up until 2011 I had been using the same bicycle since I was 15 years old: an old Kona Lava Dome from 1998. I love it. I’ve used the heck out of it for over 10 years and it’s never let me down. It’s still in pretty good shape, considering the abuse it has endured over the years. However, riding a mountain bike in the city, especially one like Madrid, is not ideal, so after a couple years of daily use I decided it was time for a change.2

I also appreciate nice things. That’s why I’m a Mac and iOS user, among other things. I value attention to detail and I recognize great design when I see it. When someone sweats the details, it shows. And I like that.

When it comes to sweating the details in the bicycle world, there’s a name that’s in a class of its own: Bianchi. They’re the oldest bicycle manufacturer in the world. They’ve been making bicycles since 1885, almost 130 years ago, and they’re a fundamental part of the history of the bicycle.

It should then come as no surprise that when I decided to buy my first nice bicycle, I chose a Bianchi: 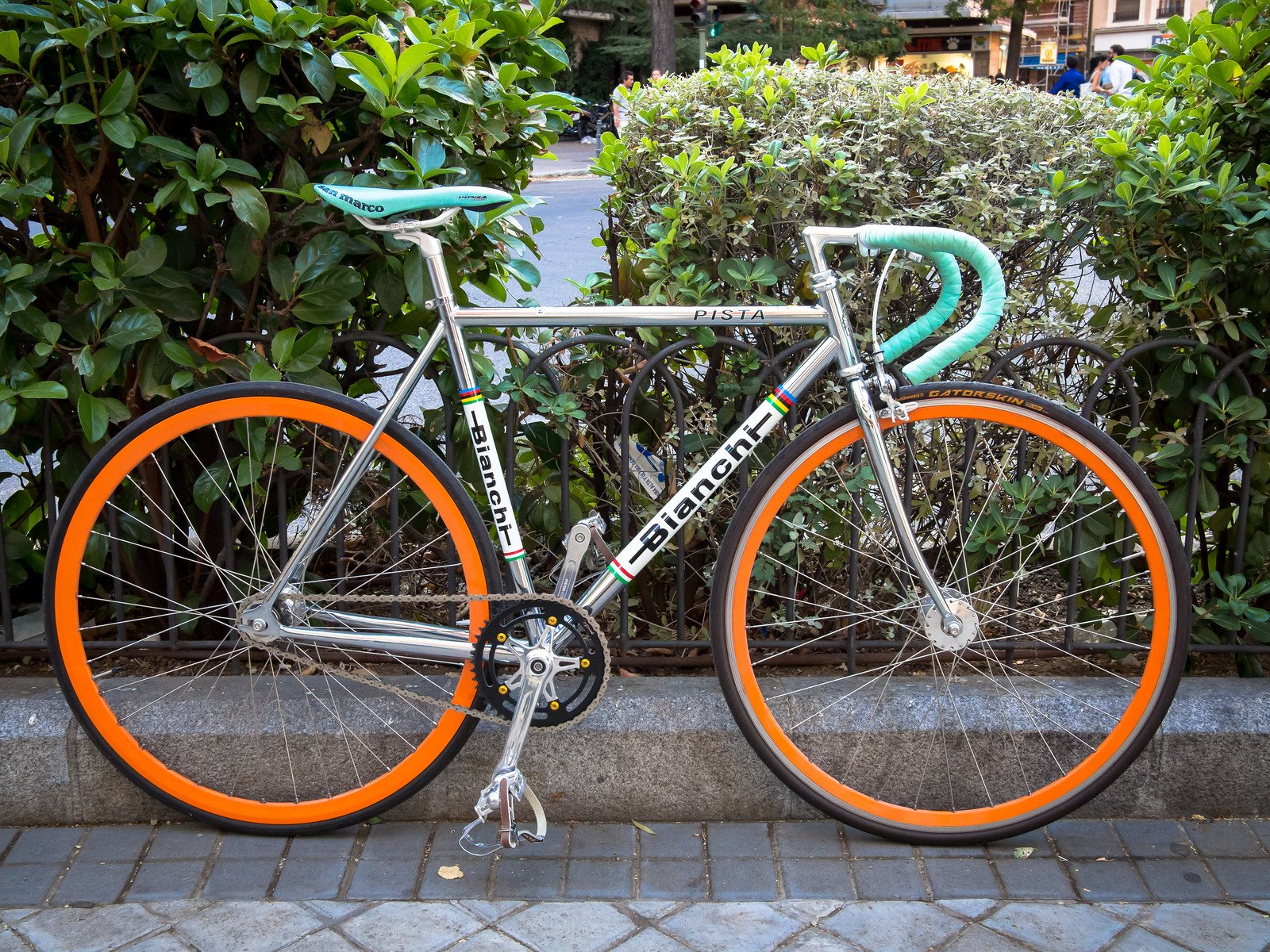 It’s a beautiful Bianchi Pista Steel from 2011, and it was the first bicycle I ever bought for myself. Today I own four different bicycles, but the Bianchi remains the only one I have purchased new from a local bike store. It’s gorgeous.3 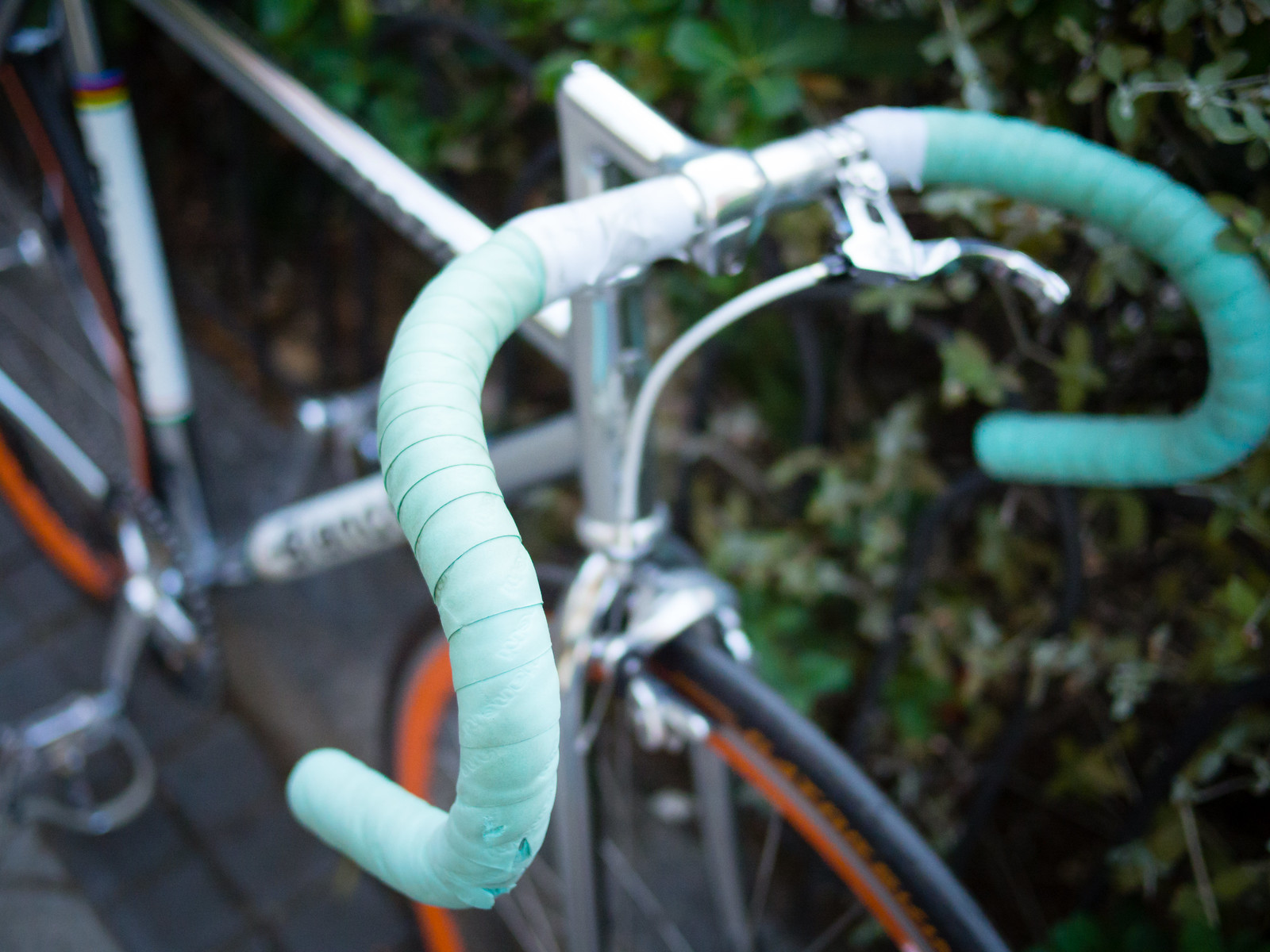 The craftsmanship and attention to detail are evident anywhere you look. In the time that I’ve had it, I’ve replaced and upgraded many of its components, but its essence remains intact: that beautiful piece of chrome-finished steel with Bianchi decals on it. The frame is the true soul of a bicycle, and mine’s is a stunner. 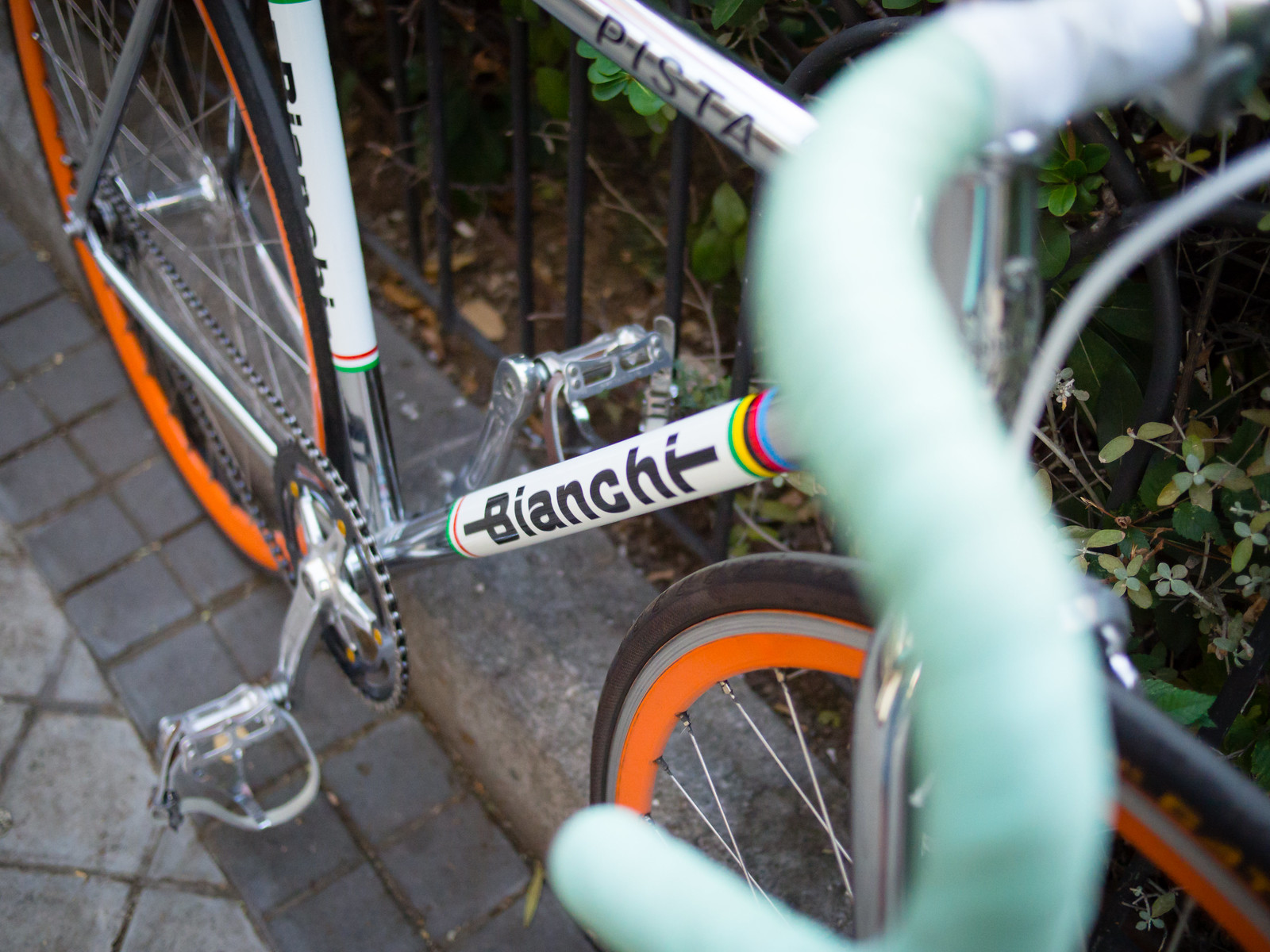 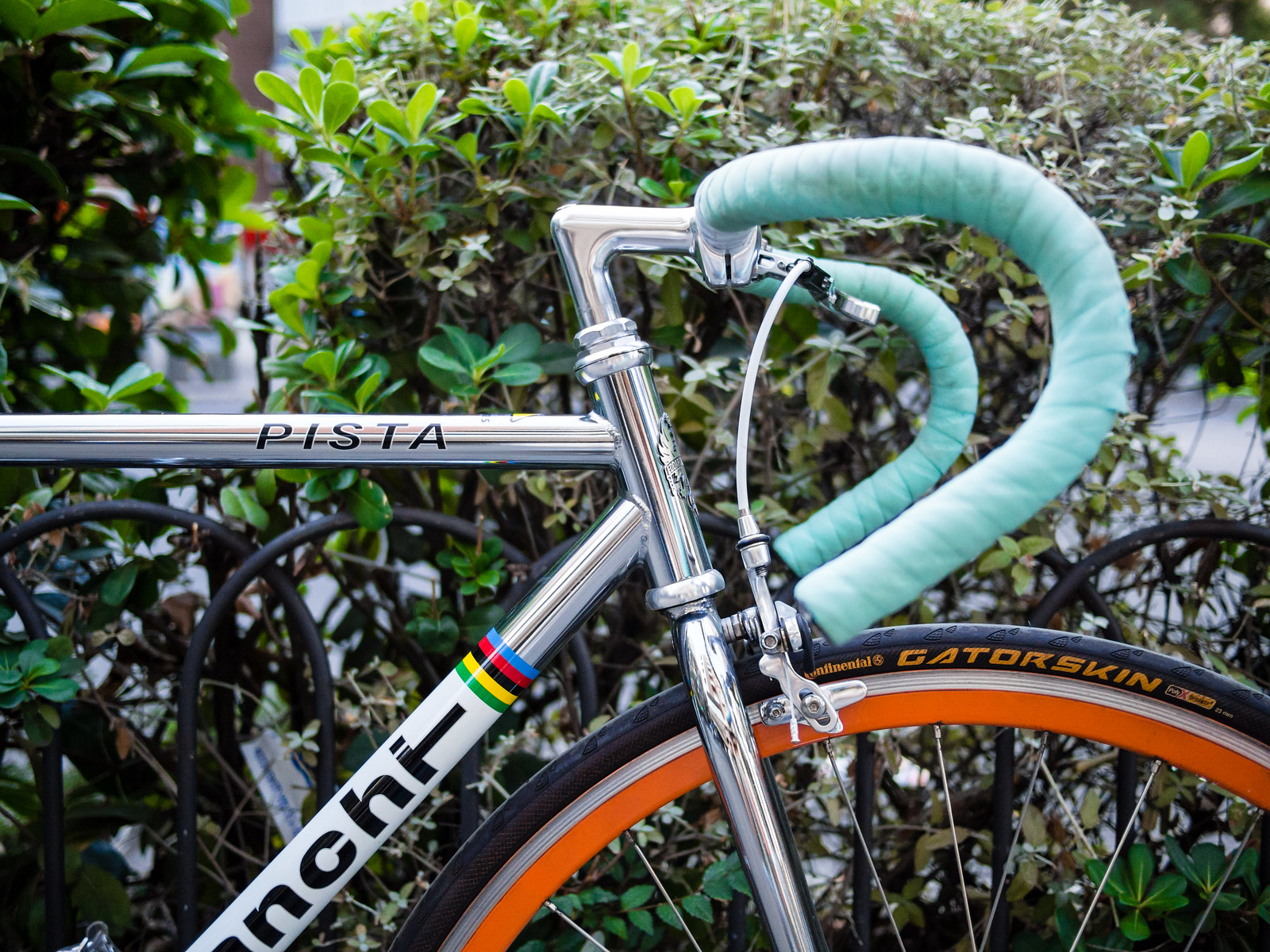 Riding it is also one hell of an experience. Fixed-gear bicycles are so much fun. I hadn’t enjoyed myself so much on a bike since I was 10 years old. I feel very fortunate to own this bicycle, because it is exactly the one I wanted.

However, in the past 12 months, I have barely touched it. It’s been mostly sitting on its rack at home, begging to be used. And it makes me sad.

The problem with nice things is that they tend to get noticed more than we’d like, and my Bianchi is not an exception. It gets looks and comments from strangers on a regular basis. Most of them are compliments, with the occasional bit of skepticism thrown in for good measure.4 I like it when a stranger feels curious about my bike, but all that attention means the idea of leaving it locked on the streets makes me extremely uneasy.

For a while, I managed. I resorted to pretty much the only thing I could do: I would take the bike with me anywhere I went, even if it was a place were bicycles are normally not allowed. I have taken it inside clothing stores, banks… you name it. Even restaurants. It certainly made for some interesting conversations with the security personnel sometimes.

After a while though, I got tired of arguing. Laziness started to creep in, and I realized it wasn’t worth it to keep fighting about the bike all the time, instead of doing whatever I was supposed to be doing. I just wanted to get my stuff done with as little fuss as possible, and in that regard, my bike wasn’t helping.

And so, last year I decided to try a different approach and I bought another bicycle. A beater bike, as they say. They’re the polar opposite of nice bikes: the kind of bikes no one would bother to steal, but even if someone did, you wouldn’t really care that much.

If you take your time, it’s pretty easy to find an old bicycle in reasonably good condition for very little money. After a few weeks looking I eventually found a great candidate: a classic hybrid Peugeot Eton 21 from 1990. It was in pretty good shape and I bought it for about $80.5 That’s almost 20 times cheaper than my Bianchi. And you know what? It may be the best purchase I’ve ever made. 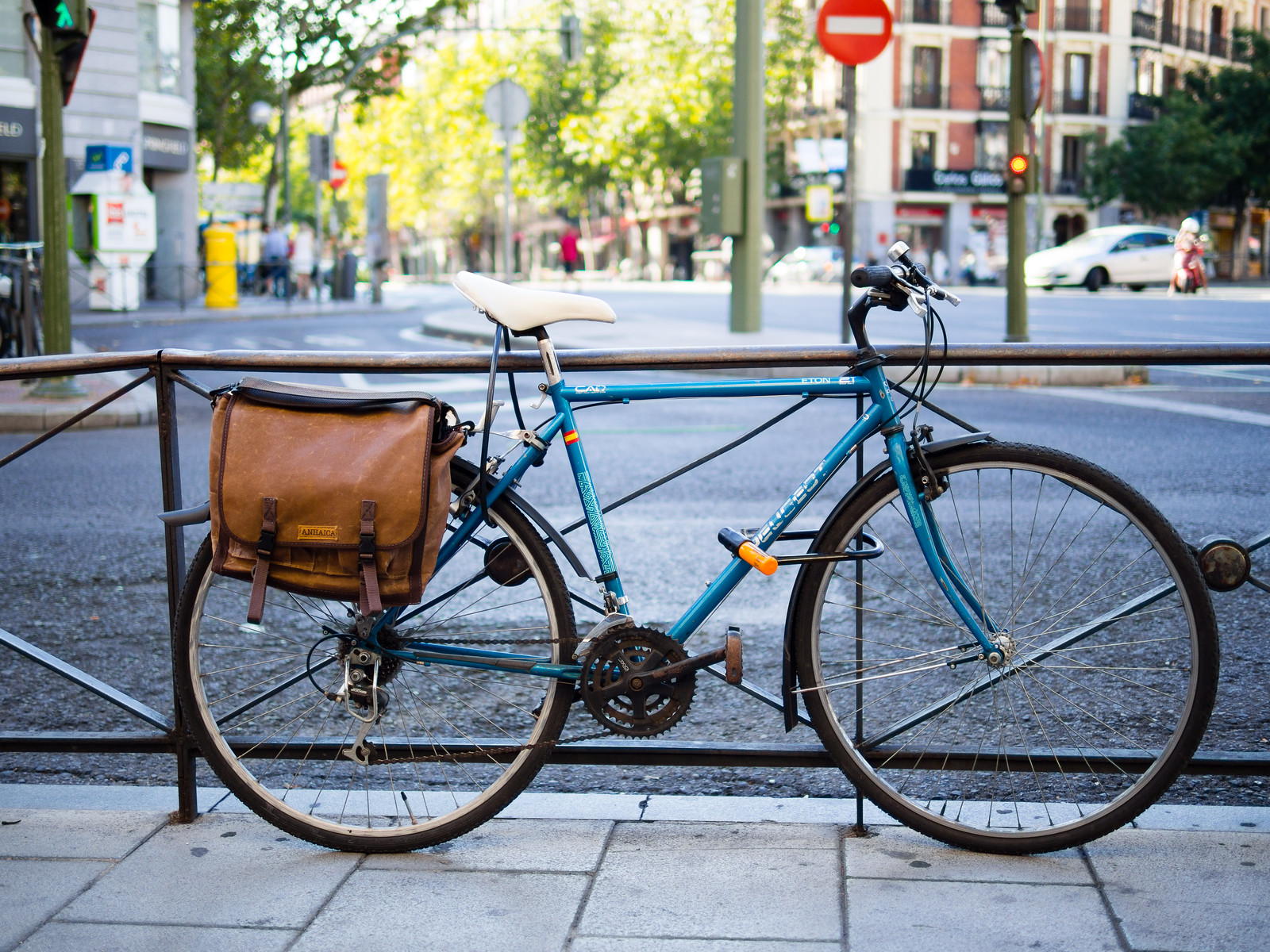 Sure, it’s no head-turner: it’s old, the frame is rusty in places and it has a certain utilitarian look to it, but that’s precisely the point. It blends right in. So much so, in fact, that last week I forgot to remove my LED lights and left them on the bike over the weekend and when I came back, after a full 72 hours on the street, the lights were still there. Nobody had even looked at the bike twice. That’s peace of mind that money can’t buy.

Thanks to this bike, I have discovered the pleasures of stress-free riding. I don’t care if it gets chipped, or stolen. I even leave it out on the street at night. Not having to carry a bike on the elevator every time I leave the house is another huge plus. Anytime I want to use it, it’s right there, waiting for me. It’s truly become the most convenient means of urban transportation I’ve ever used.

Besides, since I don’t need to worry about aesthetics, I can put big, fat tires on it, fenders and a huge rack to help me carry my bags. Now it’s the bike that carries the heavy weight instead of my back, and it’s awesome. I get wherever I’m going without breaking a sweat, lock it up in 15 seconds and off I go. As far as convenience goes, it’s pretty hard to beat.

The more I keep using it, the more I realize that this is exactly what an urban bicycle should be. Functional, discrete. Bombproof. I love it.

But then I look back at the Bianchi and, once again, I feel sad. Sad because even though I love nice things, I realize that sometimes, nice is not the best choice. Sometimes ugly is the answer.

It’s a lesson I’m still struggling to assimilate, but I’m making progress. I don’t think I’m quite ready to sell the Bianchi though. I still ride it occasionally, and enjoy it immensely. It is a wonderful piece of engineering and craftsmanship and, as someone who loves bicycles, it represents an ideal; the embodiment of my passion for these mechanical marvels.

We all have some guilty pleasures, and this is mine. Owning a nice bicycle makes me happy, even if it’s not particularly useful, or practical.

Ugly certainly has its moments, but that doesn’t mean that we have to forever let go of nice.

Fortunately, as far as bicycles are concerned, there’s always Rule No. 12.